Fotiadis took a road less traveled in route to securing his dream. He was born and raised in Indianapolis. His mother was from Indiana, while his father was born in Greece. He said growing up there, his future was pretty much already decided for him. 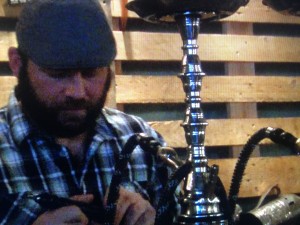 “In Indiana, if you’re good at math and science, you go to Purdue to be an engineer,” said Fotiadis.

Fotiadis graduated high school in 1997, and he attended Purdue University in West Lafayette, Ind. to study engineering. After doing that for two years, he decided to switch his focus to computer science.

After graduating in 2002, Fotiadis got a job offer from Lockheed Martin, a place where he said he always wanted to work. The company wanted him to work in the Philadelphia area, so he packed up his things and moved to the city.

“My dad always told me that you follow your job. Wherever the best job is that you can get, doing what you like, that’s where you go,” said Fotiadis.

Fotiadis said that when he moved to Philadelphia, he did not really know anybody, so he had to find a way to make friends. He said he and his roommate would have conversations over a cigar.

“We would just sit outside and smoke cigars. The cigar provided a vehicle or mechanism to facilitate a conversation between me and him so we could get to know each other,” said Fotiadis.

Cigars would become a hobby for Fotiadis, and he and his friends started to frequent a cigar shop in Manayunk.

“I started figuring out that some of my biggest problems in life were solved over a cigar. Smoking is a weird thing that brings everyone together,” said Fotiadis. 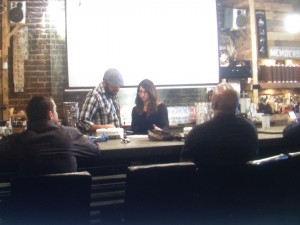 While working for Lockheed Martin, Fotiadis said that he was always interested in owning his own business. His first venture into business ownership came as an investor.

“I teamed up with two friends from back home in Indiana to open a gun shop. They take care of the day-by-day managing, and I am an investor and help with marketing,” said Fotiadis.

When changes in the government started to affect his job at Lockheed Martin, Fotiadis said he decided that it was time for a change. Then, if by fate, he came across a great opportunity.

“I drove by the cigar shop one day, and the landlord was hanging a ‘for sale’ sign in the window. I called up my buddies to see if they would be interested in opening our own cigar shop,” said Fotiadis.

In December of 2013, Fotiadis opened Smoke, a cigar and hookah lounge located on Main Street Manayunk, with the help of several investors and volunteers.

“Me and Kosta have been friends for about five years. When it was time to start the business, he came to me to be one of the investors. I couldn’t help him out there, but I told him I’d do whatever I could for him,” said Brenton McDonald, a friend of Fotiadis and a volunteer at Smoke.

Fotiadis said that most of his current employees started out helping him for free, to help him get the business going.

“It’s kind of a weird way to get employees, but it’s formed some really good relationships,” said Fotiadis. 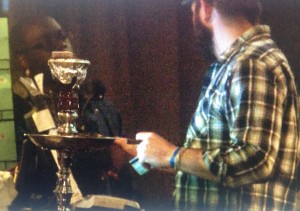 Fotiadis said that it has been an interesting transition from sitting at a desk to running his own shop, but the results of his hard work are already evident just one year in.

Philly Hot List named Smoke the best cigar shop in Philadelphia in 2014, beating out what Fotiadis estimates to be about 30 shops in the city.

“I don’t want to not take credit for it, because this is my baby and I hope everybody loves it as much as I do. It just goes to show that the following we have, the people that come in here, they’re happy, and we’re doing something right,” said Fotiadis.

One thing that he believes helps make his business so successful is being located in Manayunk.

“This community is awesome. It’s kind of this cool, small town community feel, which makes it feel like where I’m from originally, but I’m still in Philadelphia, still in the big city,” said Fotiadis.

Smoke has been a very successful business venture for Fotiadis, and he says that he enjoys it
every day. He said his ultimate goal is to not work a day past the age of 40, but for his future, he’s just going to take it day by day and not stress too much.

“If it’s taking money and investing it in someone else’s dream, I’m not opposed to that. If it’s opening the next Smoke, that’s awesome, too. My goal is to work very smart, and not work very hard. If you ever find yourself working very hard, you’re probably doing it wrong. You just need to work smarter,” said Fotiadis.

– Text, images and video by Kevin Wright and Jayson Loose.

Specks of sawdust shimmered in the sunlight as the shrill of power tools echoed throughout the skeleton of a body shop. The sight is no longer uncommon along the 5th Street Corridor of North Philadelphia, […]

Philadelphia’s City Council is attempting to pass a bill to replace the House of Correction located at 8001 State Rd., which currently houses 1,500 inmates. Plans are to replace the facility, which opened in 1927, with a […]

North Light Community Center, located at 175 Green Lane, just off Main Street, has been a consistent presence in the neighborhood for more than 80 years, offering child care, raising money for scholarships for local […]