Ian Sampson is an artist based in West Philadelphia but is originally from Birmingham, Alabama. Sampson currently works as a resident artist at the Neighborhood Time Exchange. It began in January and was originally conceived by Broken City Lab, the Mural Arts Program, the Office of Arts, Culture, and the Creative Economy, and the People’s Emergency Center.

This collaborative effort was designed to provide artists with their own space for between one and three months, so as long as they commit an hour of service to the community for each hour the artists spend on their own work at the studio. In addition to the studio, artists are also provided with a monthly stipend and free tools and supplies. The studio is located at 4017 Lancaster Ave. and is aimed to combine art and civic engagement into one.

What do you mainly do as an artist?

I’m a cartoonist, so I draw a lot of comics and do prints. Most of my work is self-published, making mini-comics and putting things online. My mini-comic “Up to the Top,” which I put out last year, was nominated for an Ignatz Award at the Small Press Expo. I also teach screen printing at the University of the Arts and art appreciation at Salem Community College in New Jersey. 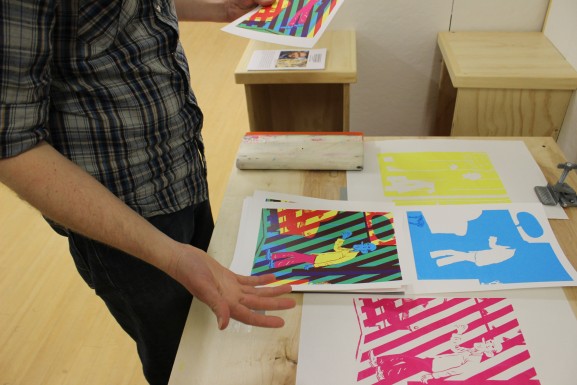 Has the Neighborhood Time Exchange been receiving project proposals from the community?

Yeah I’d say so. I think the response has been fairly positive and good so far. It’s been a little difficult for people to engage because it’s been really cold.

How are the projects proposed?

You can email or you can come in, pitch us the idea and fill out a form. Every once a week we all get together, talk about what’s been proposed, how we think we can be of help and then ideally we’ll get back to the people of the community. Even if the proposal doesn’t sound right, we try to find something in the middle. 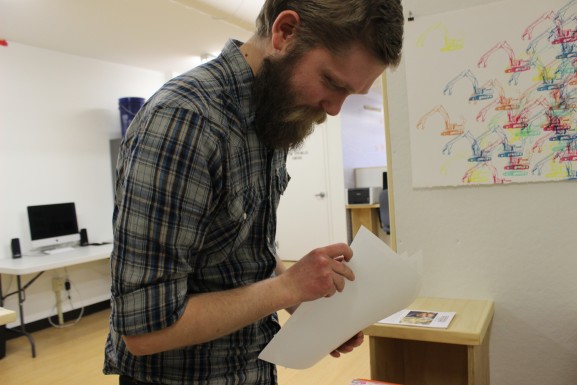 What are the kinds of projects you are working on?

Well, we have a few small projects lined up. I am going to be painting some boards to re-cover a couple of vacant homes in the Belmont area. The block captain asked if I could spruce them up, so we got some wood and we’ll paint them here. We’ve also been facilitating Mr. Muhammad at the New Africa Center a couple of blocks down who wants to turn the empty lot just across the street from him into a park. So we drew a rendering for him to see what we think it would look like.

When will your work at the Neighborhood Time Exchange be completed?

We will be done at the end of the month. We’re the first set of artists, and once we’re done a new set of four artists will be here for three months. In each set of four artists, half of them are local, which we think will be a way to sort of invest in the cultural community that’s here in Philadelphia. 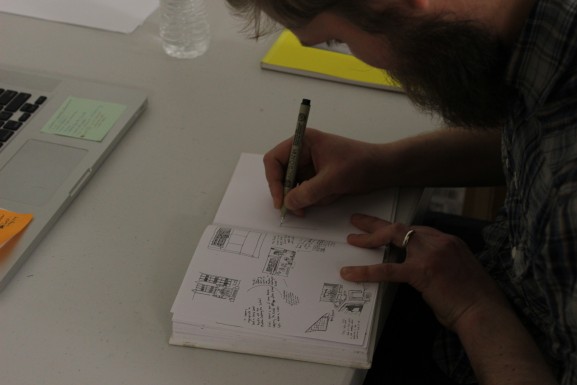 – Text and images by Naveed Ahsan

As president of the Mantua Haverford Community Center, Richard Purdie is the heart of the neighborhood. He saw Mantua’s need for a reliable and safe place where children could get away from crime on the [continue reading…]

Although some outsiders hate to admit it, Philadelphia has both a prominent and flourishing art scene. We are no New York when it comes to this stuff, but there is definitely a significant amount of [continue reading…]