Across Fox Chase, voters were out and about before the polls opened for the 2015 mayoral primary on Tuesday at 8:00 a.m.

While Republican city council candidates such as Matt Wolfe (pictured below in suit, with Jim Kimenour, a Democratic vice chairman in the 63rd Ward) could be found making their rounds and asking whether any registered Republicans had dropped by, the answer was nearly always a negative shake of the head. 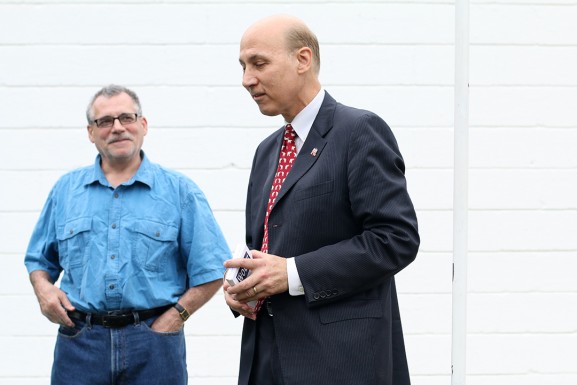 In Philadelphia, where the overwhelming majority of voters are registered Democrats, the primary is virtually more important than the general election. The winner will, in all likelihood, become the next mayor of the city.

Given that a group of community leaders, elected officials and unions in the Northeast have openly endorsed Jim Kenney for mayor, it was no surprise to learn that he was the clear favorite to win in Fox Chase.

Indeed, while there were posters and signs advertising every candidate in front of polling places, only Kenney’s name appeared on the t-shirts of virtually every volunteer stationed outside.

“He’s a tough cookie,” said Kimenour. “I wouldn’t want to go up against him in a ring.”

Time and again, voters spoke of Kenney as though he were a trusted family friend rather than a candidate. Multiple people referred to him as “Jimmy,” and expressed hope that as mayor, his chief concern would be the day-to-day lives of the people living within the city. 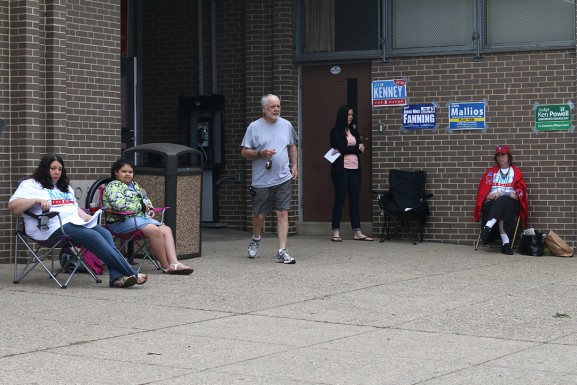 “We’re all in this together,” said Kimenour, in response to the occasionally held belief that the Northeast is somehow separate from the remainder of the city, simply because the Fox Chase area is more quiet and suburban.

All individuals surveyed spoke of education as something that concerned them, but it was always secondary to issues like job creation and crime prevention, implying that what residents really desire is a mayor who will allow them to maintain a certain standard of living.

Kenney’s experience as a member of city council was a major advantage among people in Fox Chase, who view his experience on the council as an indicator that he is closer to an everyman than a politician, and will act accordingly. 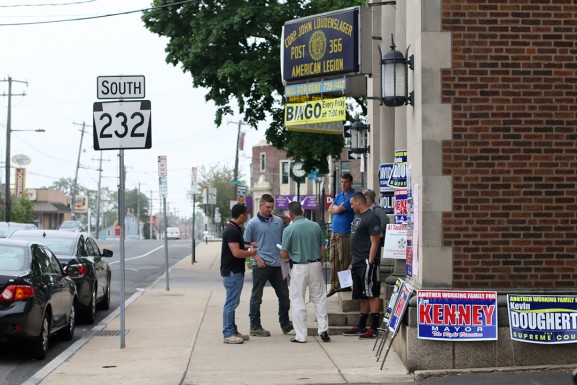 Fred Mari (pictured in green, above), a Democratic chairman in the 63rd Ward, did not want to complain about the current members of Philadelphia government, but did express a desire for change.

“I think there are people out there, from the city, within our ranks, who would do a better job,” Mari said.

Voters were primarily concerned with crime in Fox Chase, although the crimes they spoke of were more related to vandalism than violence.

“Some parts of the city can feel like no man’s land when you drive through them,” Mari said of the current lack of police activity. “The place where I live, one side of the street is Philadelphia county and the other is Montgomery, and some mornings I come outside and just have to clean up trash off of my street before I can go anywhere.”

That sentiment was echoed by others, who feel that because the Northeast does not have the same reputation for violent crime that other parts of the city might carry and that they are sometimes ignored when it comes time to decide where police officers should go.

“I don’t want to feel like just because I know you, or don’t know you, that I’m going to get better or worse treatment,” said Kimenour.

Jeannine Roach, a volunteer in front of Memorial Presbyterian Church on Oxford Avenue, said that her primary concerns included raising the minimum wage in the city and creating more jobs. She also mentioned a crime problem.

Although she did not mention seeing any violent crime, both Roach and other volunteers at the church were quick to rattle off a list of places in Fox Chase that were common sites for drug deals, none of which, they claim, were ever addressed by police.

Roach also expressed a desire for Kenney to be the next mayor of Philadelphia.

“He’s an Irishman” said Kimenour of Kenney. “Plus, he has the support of fireman, teachers, police, and they’re all unions who are going to need to support their mayor.”

As one of the current favorites to win the primary, Kenney may be in a position to repay that support soon.

– Text and images by Alyssa Luchette and Casey Kallen.

Marita McNichol was awarded with the American flag in honor of her father who died after serving in World War II. Francis P. McNichol, who served in the Navy during World War II, died 33 [Read More]

Northeast Philadelphia: Those Who Live And Work On Roosevelt Boulevard Think They Know The Road’s Real Problem

Roosevelt Boulevard, the parkway that connects Northeast Philadelphia to the rest of the city and handles some 90,000 cars daily, has a reputation as one of the most dangerous roads in the country. Residents, commuters, [Read More]