Collie Mills graduated from the University of Arts in Philadelphia in 2008 with a degree in illustration. Not that he ever thought he would find a career doing what he is doing.

“I never wanted to be a tattoo artist.” Mills said. “It was until I started getting tattoos that really inspired me.” 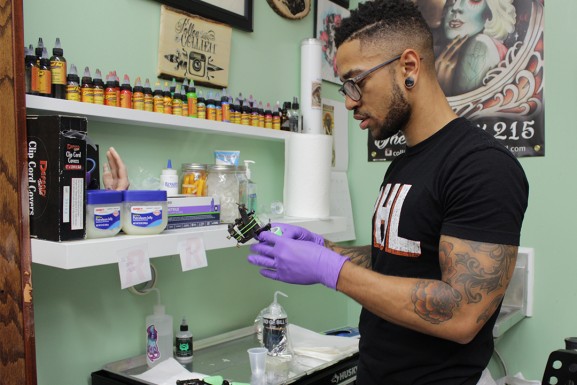 Mills (above) searched on Craigslist for an opportunity to find a start for this future career. The young tattoo artist was an apprentice at a few shops in Philadelphia.

Mike Nemo, Mills’ former classmate from the University of the Arts, opened The InkWell 215 on 7344 Frankford Ave. in Mayfair in May 2014. He contacted Mills to see if he knew any tattoo artists interested in working at his new shop.

“When Mike asked me if I knew any tattoo artists, I knew this was a great opportunity,” Mills said. “I was like me!”

He was open to take the position because he was not happy at his prior job at another tattoo shop. Mills joined the Mayfair tattoo shop and immediately loved the atmosphere and energy of the shop.

“I hired Collie because I was a fan of his art in school,” Nemo said. “He won awards at school for illustrations. After school we stayed in touch and I’m glad he’s a part of the team. His artwork stands out because he has a different style than everyone else.” 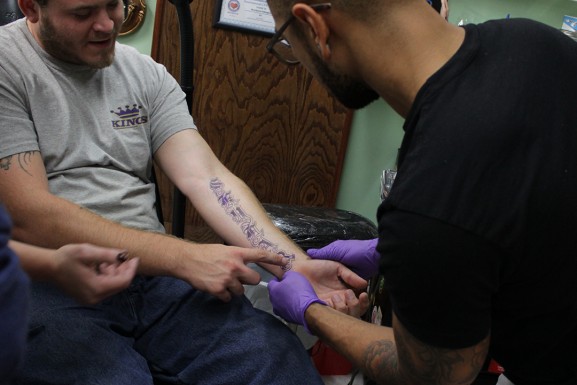 “Collie does these wood cuts,” the tattoo shop owner said. “They are mark on wood cuts. I haven’t seen anyone really do them. He niched the market on that.”

Robert Coyle, a Mayfair resident, has been a regular customer since Inkwell 215 first opened its doors.

“I have a strong passion for tattoos because it’s a way to express myself and it’s a way to put all the things I love on my body,” Coyle said. “Collie is a great addition the InkWell 215 family.”

Mills did one of Coyle’s tattoos, a bird on his right arm. 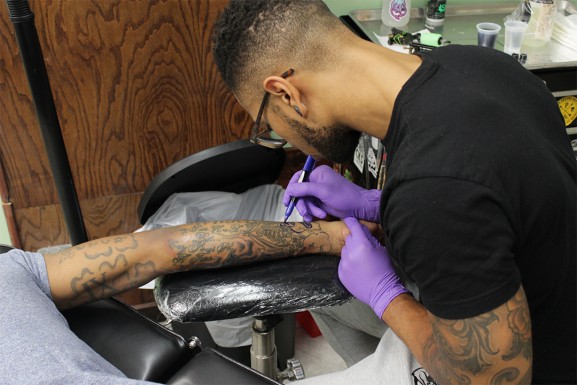 First-time customer Kenneth Jones (above) found the tattoo shop on Yelp and gave them a call, where he talked to Mills about his plan for a tattoo. Jones left happy with the new tattoo Mills did.

“He took care of me,” Jones said. “He brightened some of my old tattoos and brought them back to life. When an artist does that, you know he’s talented and good at what he does.” 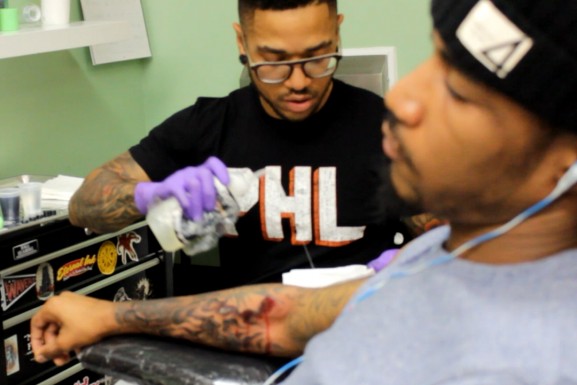 Even though apprentice Ryan Wolf has only been employed with InkWell 215 for three weeks, he says Mills is one of the artists that stands out.

Mills doesn’t just use his talent in Philadelphia, traveling around the world to take part in tattoo conventions. But next month he won’t have to travel too far. The upcoming convention in November is only in Atlantic City, New Jersey.

On one occasion, he didn’t have to travel anywhere to tattoo. Literally.

“It hurt so bad when I did it.” Mills said about becoming his own client. On his right leg, he tattooed a band-aid right above his knee. “Ever since I become a tattoo artist, I wanted to tattoo myself. I never knew what I wanted. I think a band-aid is simple.”

Collie Mills proves that a simple connection can turn into an unexpected opportunity. He is more than happy that Nemo presented the opportunity of lifetime to him. Mills lives in the moment, not knowing if he will open his own shop in the future. His co-workers and clients can agree that his hard-work, dedication and talent will bring him far.

Texts, images and video by Christina Dogas and Sade Canty.

The Northeast Community Center on Holme Avenue wasn’t empty for very long as new tenants from Lighthouse Chapel International moved in last month, but the community is still concerned with the parking and the pool. […]