The Mayfair Memorial Playground is a community built park and is helping the community come together. It’s located in front of Lincoln High School on Ryan Avenue.

The playground received a $80,000 grant from KaBOOM in 2011. KaBOOM is a national nonprofit that helps provide children with an active lifestyle. Every year the Friends of the Mayfair Memorial Playground holds two fundraisers, an Easter egg hunt and the Halloween Spooktacular, to help with the playground’s funding. 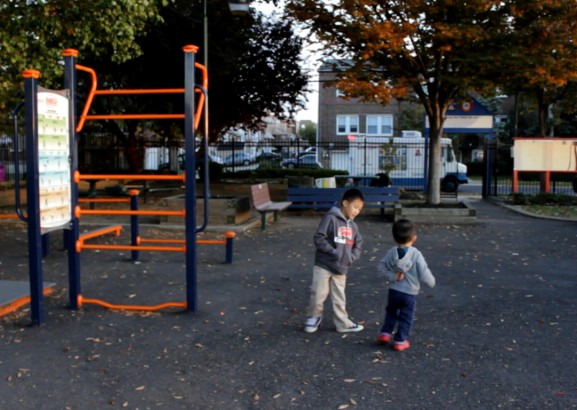 In 2011, the Friends of the Mayfair Memorial Playground dropped envelopes in neighbors’ doors asking for donations for the rebuilding of the community playground. Many residents donated money to see the abandoned park grow. Giant supermarket also played a big part in sponsoring the playground. More than 200 employees helped volunteer to build the park.

“There was no politics involved,” Hylan said. “It was strictly for the kids. It was something that the neighborhood really got behind. We met a lot of residents interested in the betterment of the community.”

Kaboom’s main commitment is community wellness, so they gave a $16,000 grant to provide for adult exercise equipment.

“While the kids play, their parents can workout on the exercise equipment,” Hylan said. 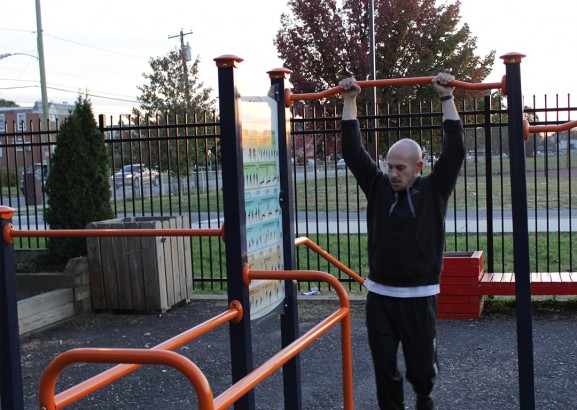 Because the exercise equipment is close to the “Lincoln loop,” which is what runners call the one mile circle near Lincoln High School, runners come to the equipment for a cool down.

The rebuilding of the playground branched off to community improvements. The Mayfair town watch was reorganized and it made the Mayfair Civic Association stronger.

KaBOOM calls yearly and uses the Friends of the Mayfair Memorial Playground as a resource for the Northeast.

They are fundraising for the next piece of equipment and surfaces of the playground. They are also working on a dog park to be built in the neighborhood.

The community keeps up with the garden by planting fresh flowers and pulling weeds from the grass. Mayfair resident Charles Faillace walks his dog by the park everyday after work.

“I used to take my 22-year-old daughter here when she was young before it was rebuilt.” Faillace said. “Now that it’s rebuilt, I take my younger daughter here. I like the atmosphere that this playground comes with. It really is a nice place to get acquainted with the community.”

Faillace also helps freshen up the garden in front of the park and picks up trash in and around the park.

Kelly Jones was born and raised in Mayfair. The cleanliness of the park is what attracts Jones to bring her one year old son to the park.

“There’s nonsmoking signs all over the park,” Jones said. “There’s trashcans in the playground too which makes it so much cleaner. I also like how there are picnic tables here. My girlfriend and I have picnics a lot. We go to Jeanes Pizza down the street and get a slice of pizza and come back to the tables.”

– Text, images, and video by Christina Dogas and Sade Canty.

A young neighborhood by Philadelphia standards, Mayfair represents the unofficial center of Northeast Philly. A population dense and rich in small, store-front businesses, this community welcomes diversification among its populace, but yearns to maintain its [continue reading…]

The annual Philadelphia Live Arts Festival and Philly Fringe brings thousands of performing artists from around the world to the city to showcase their acts and talents. For some, it is an once-in-a-lifetime experience and [continue reading…]