When you leave the neighborhood you grew up in, it can be easy to simply move on from the troubles you faced there. Many want to escape their, perhaps, troublesome pasts and move on toward their futures, but for Hunting Park native Ryan Harris, forgetting isn’t an option.

Harris, 29, grew up in Hunting Park with seemingly few prospects for his future. Seeing how his life could have played out, especially as a young adult, is part of what inspires his work in the neighborhood.

“When I was 18, 19, 20, I was supposed to be either dead or in jail,” said Harris. “Being able to graduate college and then being able to come back and share with the community what I learned [is why I came back].”

Harris no longer lives in Hunting Park, having moved to Northeast Philly after college. However, his presence is still noted and appreciated by longstanding members of the community.

“He came to a community where he grew up and he’s actually giving back,” said Vanessa Aranne, 31, a friend of Harris who grew up in the neighborhood with him. “He didn’t grow up here and forget about us; he’s here helping raise our kids.” 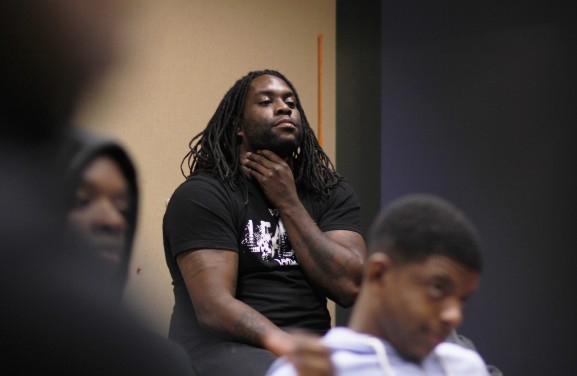 After graduating from Cheyney University with a degree in recreation and leisure management in 2011, Harris founded the nonprofit organization As I Plant This Seed, which is dedicated to guiding the social and educational development of at-risk youth and is hosted in the Lenfest Center.

The first event hosted by As I Plant This Seed was the back-to-school event in 2012, where Harris fundraised to buy and accept backpacks for students starting a new year of school. Harris was not the first to come up with this event, but he gave it his own unique twist.

“A lot of people were giving away free bookbags, but I wanted to do something that was a little more impactful,” said Harris. “I wanted [the community] to understand the value of education. With my back-to-school event, you could come get your backpack, your school supplies, but you would not receive your bookbags until you listened to four speakers.”

The now-annual event is structured in such a way that people who want to receive the free supplies have to attend a four-hour-long session where four, usually black, successful people – be they entrepreneurs, college graduates or successful through other means – come in and talk to the community about how they succeeded. 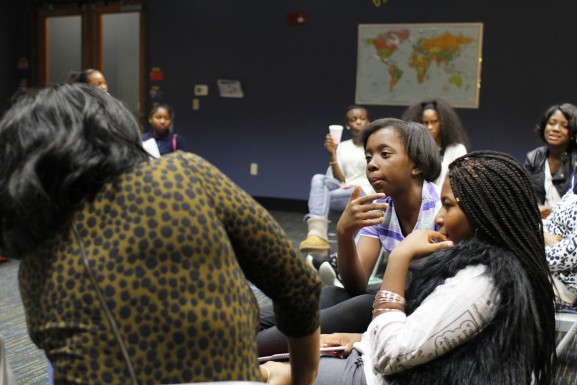 “I wanted the youth to be able to look up to someone who looked like us, came from the same hardships as us, but made it,” said Harris. “That was my goal with the back-to-school event.”

This take on charity has really caught on in the community with the event gaining momentum over the years. The first year Harris successfully gave away 86 backpacks – the next, 175, followed by 250 and, most recently, a whopping 400 backpacks with 500 people attending the event.

Since last March, Harris has been managing a program called Talk To Me, also based out of the Lenfest Center, where the community’s youths can go and express themselves to one another as well as experience positive adult influences outside of their own parents.

“There was not a resource like [this when I was growing up],” said Jaynay Johnson, 27, a two-time speaker at the program from New Jersey. “I made a lot of really poor decisions because I didn’t have a resource. That’s why I think it’s really important to give back.”

Johnson is the author of a new autobiography about her time growing up and went to the program to talk to the kids about making smart decisions as they grow up. Through Harris, each child in the program will be getting a copy of the book and attending a book signing event with Johnson.

“I think Ryan is just amazing,” said Johnson. “I think a lot of people aren’t genuine and he’s very genuine. When he says, ‘I’ll do anything I can,’ I know he means it.” 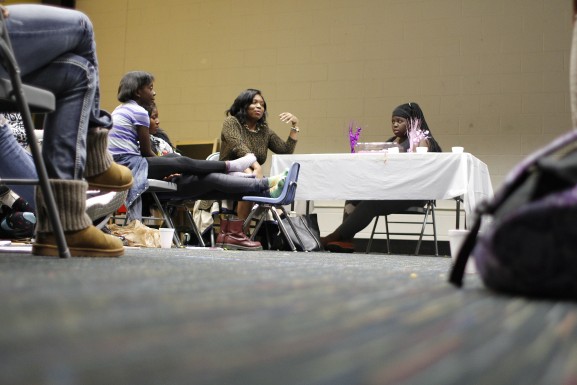 This feeling of genuineness also rubs off onto the students in Harris’ program.

“He’s nice and he’s caring and he really wants to help kids a lot,” said Jahira Terreforte, 13, a student in the Talk To Me program. “He makes it so that if you don’t have a father, he’s your father, your uncle, stuff like that. … He’s just a nice, genuine person.”

The kids are engaged and eager to listen to and learn from one another during their sessions, which take place on Tuesday and Thursday evenings from 6 to 8 p.m. 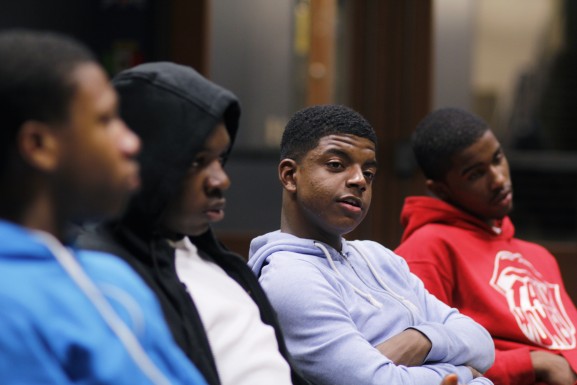 While his passion lies in helping these youths, Harris is still working on making a career of it while he works some other jobs to make ends meet.

However, Harris’ program has become more successful within a year of existence than he ever hoped it would be, and he’s looking to the future, showing no signs of slowing down.

“I want our community to grow as a people, just collectively,” said Harris, “so that we can grow out of this box that we live in.”

– Text, images and video by Harrison Brink and Holli Stevens

The former Roberto Clemente Middle School building in Hunting Park remains without a bid after the Philadelphia School District put it up for auction more than three months ago. “The asking price for Roberto Clemente is […]

Nabilla Ariffin is the community impact director at SquashSmarts, a non-profit academic and athletic program which uses the game of squash to keep kids healthy, in school and on track to graduate. Since joining the […]

Young children and their guardians watched as a big blue, red and white volleyball went back and forth over a volleyball net which signified the beginning of another family fit class at the Esperanza Center […]