Some days, Sylvester Cooper, spends seven consecutive days at work, cooking and serving breakfast, lunch and dinner to the men at Ready, Willing and Able on Bainbridge Street.

Cooper, 55, is a kitchen supervisor at RWA but it wasn’t always that way. The Philadelphia native once struggled with drugs and alcohol addiction to the point where he got into a horrific car accident, where he was charged with drinking and driving.

“After seeing the car that I was in, I thought there was no way I should have been alive,” Cooper said. “I should have been dead because I totaled the car. If it wasn’t for God and the airbag, I wouldn’t be here today.”

With memory of the gruesome accident playing back in his mind, Cooper said he realized he needed to make a change. He first sought help at the Salvation Army before enrolling in Ready, Willing and Able, where he and other men – who were either homeless, incarcerated or suffered from addiction – are housed for a year.

Jason Miller, the first local executive director of the Philadelphia nonprofit organization, which is a part of a larger organization in New York called The Doe Fund, said the goals for the men are to be employed, remain clean and sober from drugs and alcohol, and have a permanent home after they have graduated from the program within a year.

Miller, who has been the director for a year, said there are 70 men in the program. The majority of the men who are enrolled in the program clean the streets of Philadelphia, anywhere from Fairmont Park to Germantown. Some of the men also spend their time cleaning women’s homeless shelters, including the Stenton Family Center and the Woodson Family Center.  The men clean bathrooms and kitchens, and also buff floors, among other things. With such experience, Miller said they can get employed at various places. 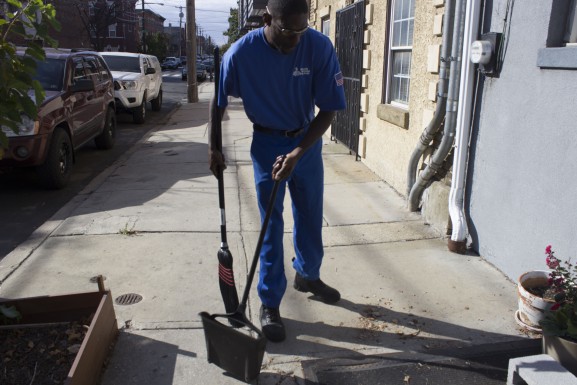 “They can go get jobs at hospitals, nursing homes and other facilities to clean,” Miller said.

Men can enroll in the program once RWA staff reach out to their caseworkers, who are assigned to men in emergency shelters like My Brother’s House. The caseworkers then send RWA referrals of men they believe would fit into the program.

Yet before RWA accepts these men, they first have to go through an interviewing process, where they have to be clean and sober for 30 days or more at the shelters. Secondly, the men have to be willing to work during their time in the program and, finally, be able to look for work in the weeks leading up their graduation.

Harry Boyd, senior supervisor at RWA, has been employed there since it was started 14 years ago. Boyd said RWA has undergone some major changes since Miller was hired a year ago. One of the visible changes the organization has made is moving.

Six months ago, RWA moved down the block to 1221 Bainbridge St. Boyd said their previous building was falling apart. It was leaking, he said, and the plumbing, heating and air conditioning was bad and not suitable for the men who lived there. Another change that Boyd said Miller made was providing more opportunities for the men in the program.

Boyd said they had to re-interview a lot of the men and find out what their strengths are and what they wanted to improve on. As a result, they created different fields like security, culinary and a computer room, where the men can be educated.

“We have 24-hour security here, so the trainees can go into that and learn how to be a security guard, which is a very popular job out there,” Miller said. “But if someone has a felony, we know companies that are looking for security guards will not hire them, so that knocks out some of them from doing that.”

“Those who have cooking experience or want to learn that can join the culinary team that cooks three meals a day for the men who are in the program,” Miller added. “We have a catering business, where they can learn how to cater food, anywhere from a coffee break to a wedding. … So we do three to five of those a month.”

Cooper said some of the organizations they cater to are the PRO-ACT Training Center, Holy Trinity Baptist Church and Career Wardrobe, an organization that helps women with job training skills as they enter the workforce. 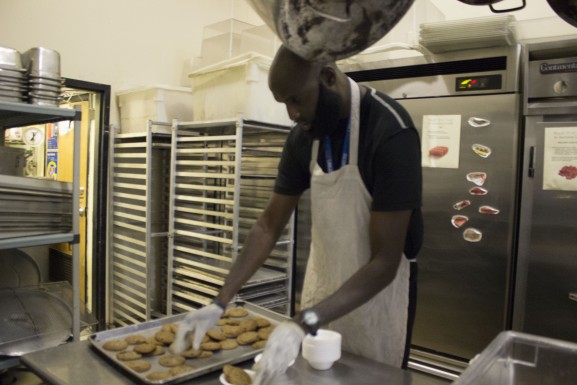 The culinary team can become state-certified by Cooper, who graduated from the program and then came back to work for RWA. After they are certified, they can go out into the workforce and find jobs at restaurants, nursing homes or schools.

One of the unique opportunities RWA provides its trainees is getting acclimated to technology. Miller said volunteers go to RWA to teach the trainees how to do anything from setting up an email account to having a social media account.

Derrien Myers, who was once homeless but has computer skills, has been at RWA for seven months and now works in the computer lab helping his housemates to create resumes, find internships, go on a job search, and even try to get their GEDs on the computer. After Myers graduates from the program, he has a goal of his own.

“I applied to some schools to study medicine and become a doctor,” Myers said. “I like helping people and making them feel better. I would like to have my own clinic one day.”

After working 30 hours per week, the trainees are paid $8 to $9 per hour, Miller said. In order to graduate, the men have to show a lease, check stub and remain clean and sober. Miller estimated that the men can make up to $4,000 if they are successful in the program.

The average graduation rate for the men enrolled in RWA is 56 percent, according to Miller, with some participants finding jobs in kitchens, as chauffeurs at the airport and as grocery store stock employees.

Not all men who enter the program graduate because they relapse, fail to abide by the rules or start fighting; others leave just because they want to, Miller said.

Ready, Willing and Able has a $2.7 million budget. Out of that budget, Miller said two-thirds comes from the city’s Office of Supportive Housing, and the other one-third comes from fundraisers, catering and tasting events.

Cooper, who has been the kitchen supervisor since February, said because of how the program has helped him, he is much closer to his family.

“It is a good feeling when I walk through the door and my wife, kids and grandkids are like ‘Hip, hip, hooray!’ rather than, ‘Here he is again,’” Cooper said.

– Text, photos, and video by Felicia Topsale and Danielle Nelson

“No sense caring about it,” said Richard Connon, owner of Richard’s Bike Shop on Kensington Avenue at Lehigh Avenue. “I can’t do nothin’ about it. It ain’t the first time, they do it a lot [continue reading…]

Scarecrows and shovels, trash cans and gardening gloves are strewn about in South Kensington community gardens. Few plants are blooming, but preparations are underway for another year of community-based gardening. “I think that community gardens [continue reading…]