Inside an Oregon storage unit a few days after their engagement in July, R. Eric Thomas learned something about his fiancé, Rev. David Norse (above), through some old photographs.

“We both realized that we were pretty lonely teenagers,” Thomas said. “That is what it is, but I got to see parts of him that I recognized as similar to my experience as a teenager.”

Photography offered Norse an escape in high school. Each shot awarded him an opportunity to look for something different in the world, so he hid behind the lens.

In the storage unit, there were portraits of his friends. Nature played into his upbringing as an Eagle Scout in Sherwood, Oregon, which helped explain the photos in the woods.

Other items inside the unit included Norse’s college admission essay, a ton of books and a love letter from an ex-girlfriend, from when he believed he was bisexual in college.

For someone who talked with his partner about wanting to be closer with his friends growing up, sorting through his childhood couldn’t have been an easy process for Norse.

“I imagine that’s hard to go through,” said Thomas (below). “Seeing him sort through this taught me a lot about his emotional process and how he’s able to make peace with the past.” 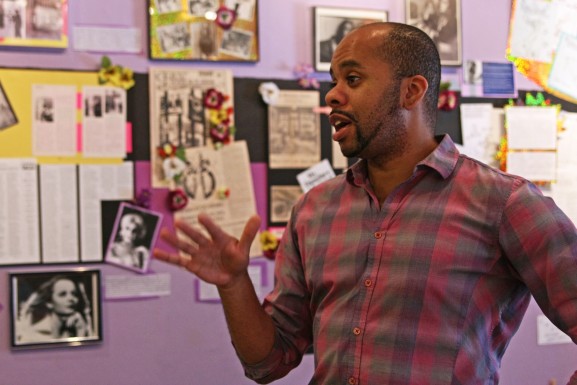 Norse is the first openly gay Presbyterian pastor ordained in Philadelphia, and this past June, he gave a TEDx talk about integrating his LGBT identity with his Christian faith.

During his talk, which is still in the process of being edited and published, Norse spoke about the future Christian church as he sees it. He imagines a church one day where a kid can go after realizing he or she is gay without the fear of being shunned by the community.

“I talked about there’s a church that is full of love and acceptance,” Norse said. “It was this really beautiful moment being able to say this is my journey, this is where I came from.”

The 29-year-old’s story began in Sherwood, a farming town about 30 minutes outside of Portland. Norse’s family moved there from Southern California when he was 4 years old.

When they moved there, the town had about 7,000 people, Norse estimated. By the time he left for Princeton Theology Seminary, the population doubled and ideologies shifted.

Sherwood was conservative when Norse was growing up. Many in the community were members of the Church of Latter Day Saints of Jesus Christ, as well as evangelical Christians.

Because Sherwood is a farming town, its politics revolved around it. The farmers saw the world through the glass of what would allow them to continue to farm.

“It was very fiscally conservative in a lot of ways,” Norse said. “Even though Oregon is very socially liberal, where I grew up, it was more conservative. On the social side, too.”

As he grew up, however, he began to see the town change. It’s been about 10 years since he left Sherwood after graduating high school but he saw firsthand the town’s evolution.

“I really expected my dad to reject me,” he said. “I was afraid I was going to lose that relationship when I came out. He surprised me and he changed. I watched that happen.”

Norse first realized he was gay when he was about 6 years old. His parents gave him an allowance, and he was free to use it however he desired. How it worked was his mom would take him to the mall every so often and he’d let her know which toy he wanted.

There’s one story he always tells. He was at the mall with his mom after “Aladdin” came out in 1992 and he wanted to buy an Aladdin doll. Norse describes the doll as having a “raging six-pack and pecs,” which his mom wasn’t sure his dad would approve, he said.

“I was pretty young and really started to realize I was attracted to men,” Norse said. “As I grew older, there were more moments along the way, having crushes on classmates.”

Looking back, Norse doesn’t think his parents knew what to do when he came out. When he was in seventh grade, his father first suspected he was gay.

Rick Norse received a call from his work after his computer was being worked on. There were some websites on the computer his work thought he would want to know about.

“My parents in seventh grade had that conversation with me,” David Norse said. “My dad didn’t really know what to do so he called our pastor and said, ‘I think David’s gay.’”

His pastor growing up was Rev. Ken Evers-Hood, his mentor. In conversations with Norse’s dad, Evers-Hood defended him and helped create a space for him.

“That was really powerful for me as I started to realize who I was,” David said.

Over time, Rick Norse started to change. His love for his son meant more than any prior prejudice. Evers-Hood noticed it, and so did David.

The way David Norse describes it, his dad is stubborn—like himself. So for his dad to budge, it meant a lot. David gave his dad a book he read in college, “Struggling With Scripture.”

That book was the hardest thing his dad had ever read, David said. Rick had a dictionary open while he was reading it, according to David.

“It meant so much to me that he put that much energy into saying, ‘I want to understand this and I want to learn,’” David said. “And that was really beautiful to see.” 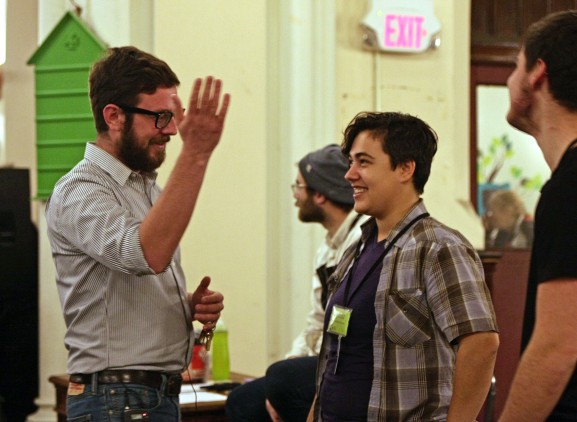 At Princeton Theology Seminary, Norse’s neighbor was Rev. Andy Greenhow (above, left). The two attended seminary together and each graduated with a master of divinity.

“We stayed in touch. We both were on the four-year plan,” Greenhow said. “I took a year away to work full-time at Broad Street (Ministry) and he took an extra year, too.”

Greenhow said he knew right away Norse was gay and they became fast friends. A couple years out of seminary, both are ordained ministers at Broad Street Ministry.

As an out pastor and minister of pastoral care in LGBTQ belonging at BSM, Norse is able to serve a community in need. He’s a gifted caregiver, Greenhow said. At Broad Street Ministry, Greenhow described Norse as its “special forces pastoral care guy.”

If Greenhow had to single out Norse’s biggest strength as a pastor, what would it be?

“David knows how who he is,” he said.”And David doesn’t apologize very much for himself. So much of our modern world demands that people apologize for who they are. That’s an incredible gift when you’re doing ministry.” 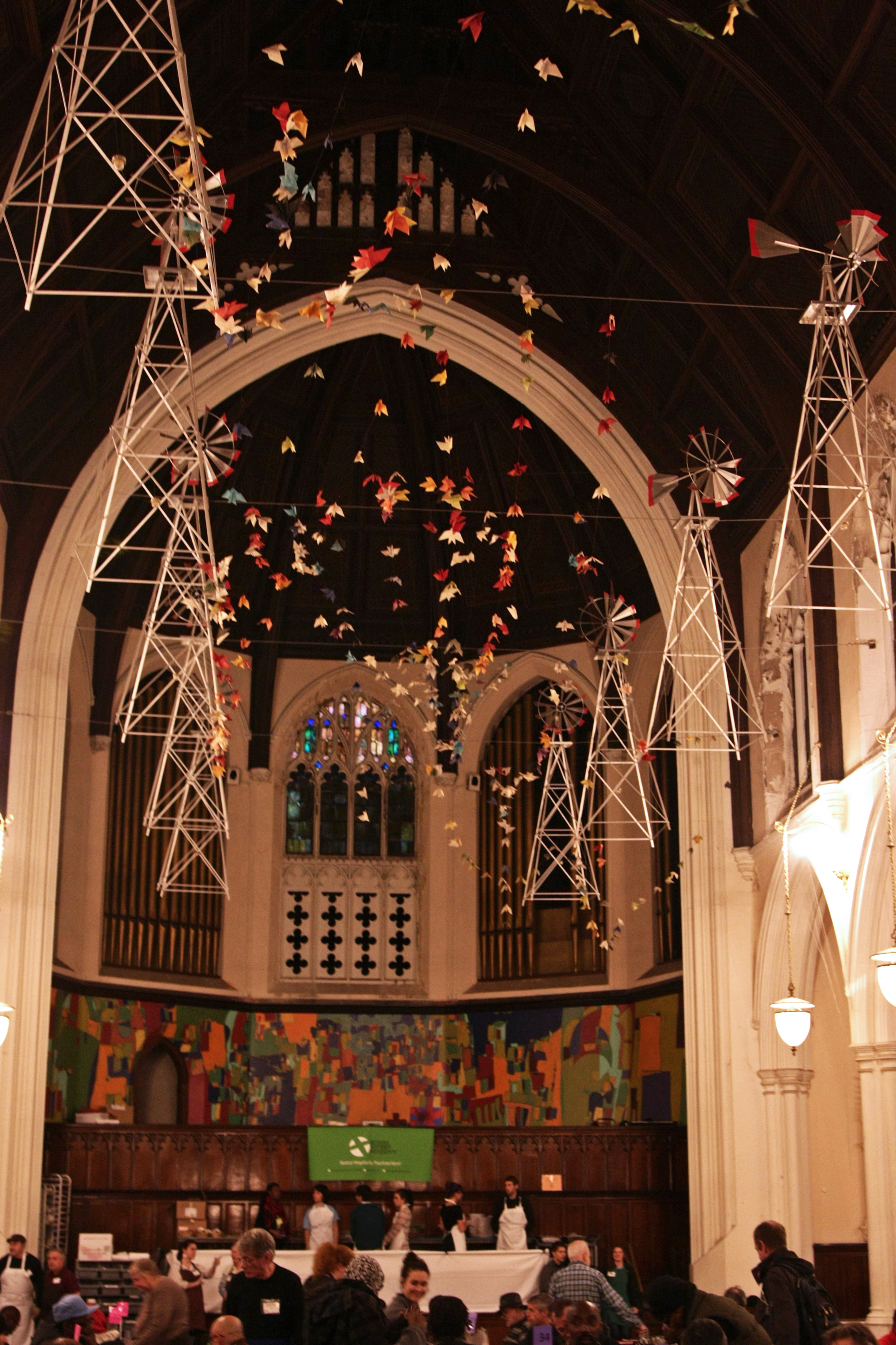 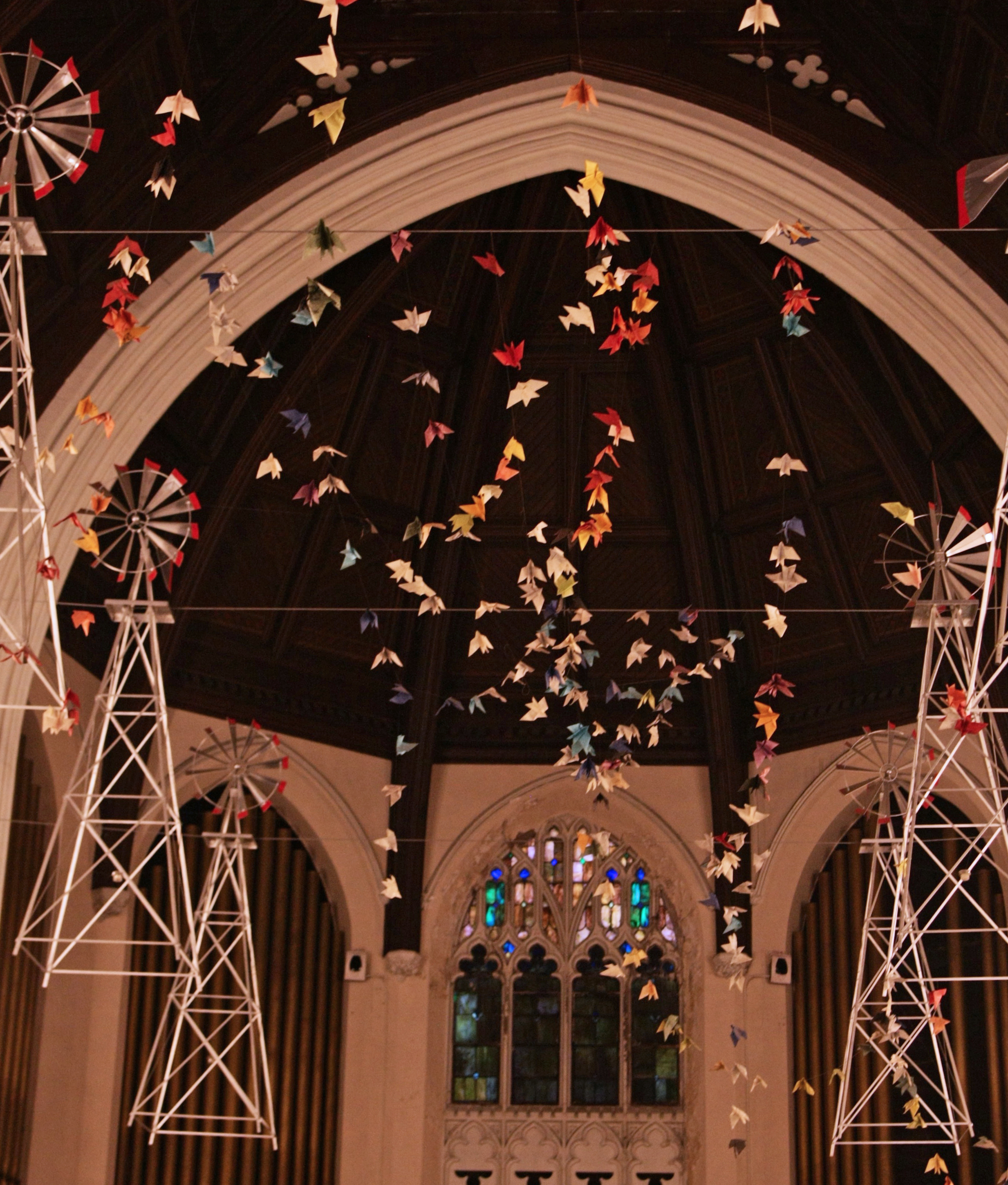 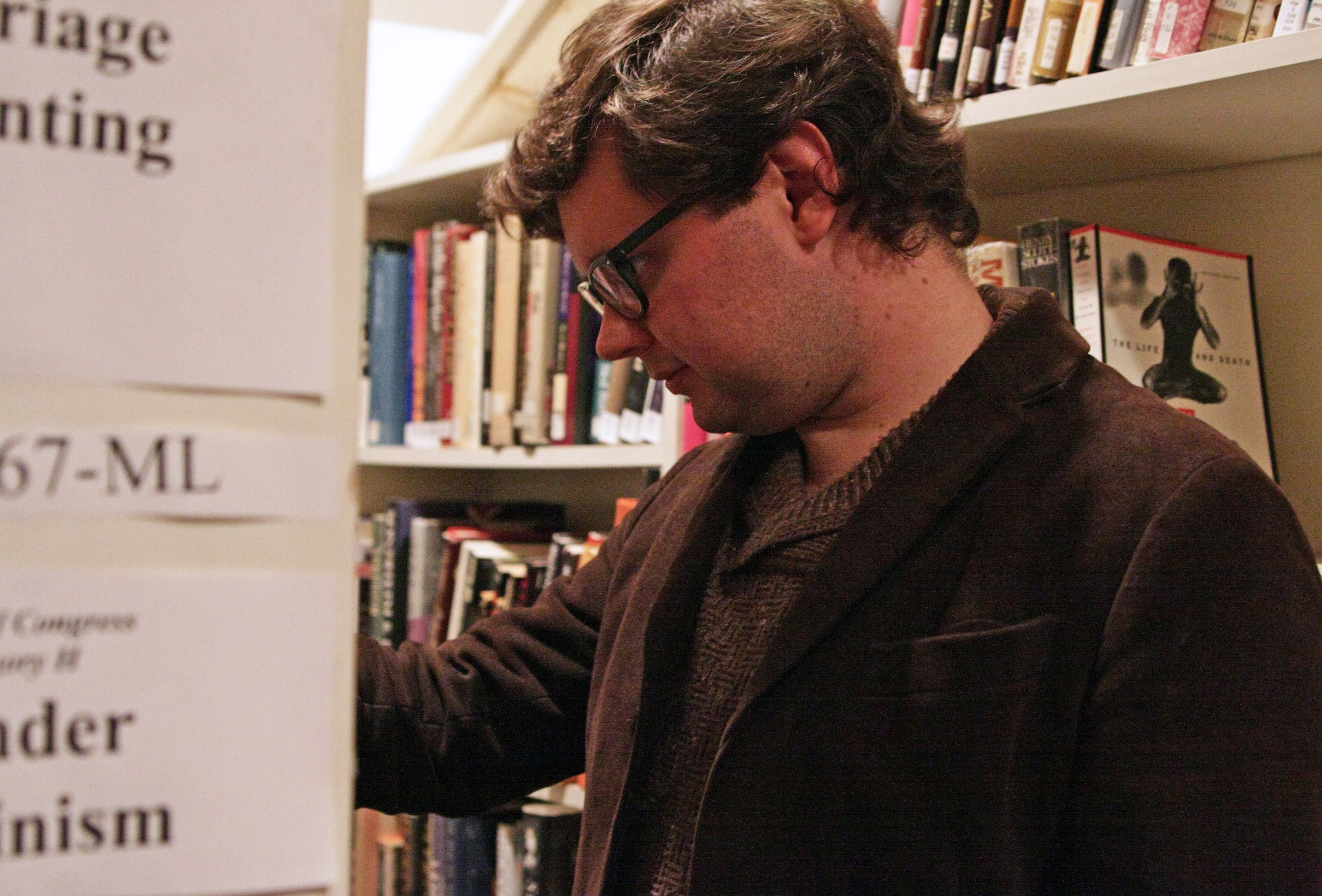 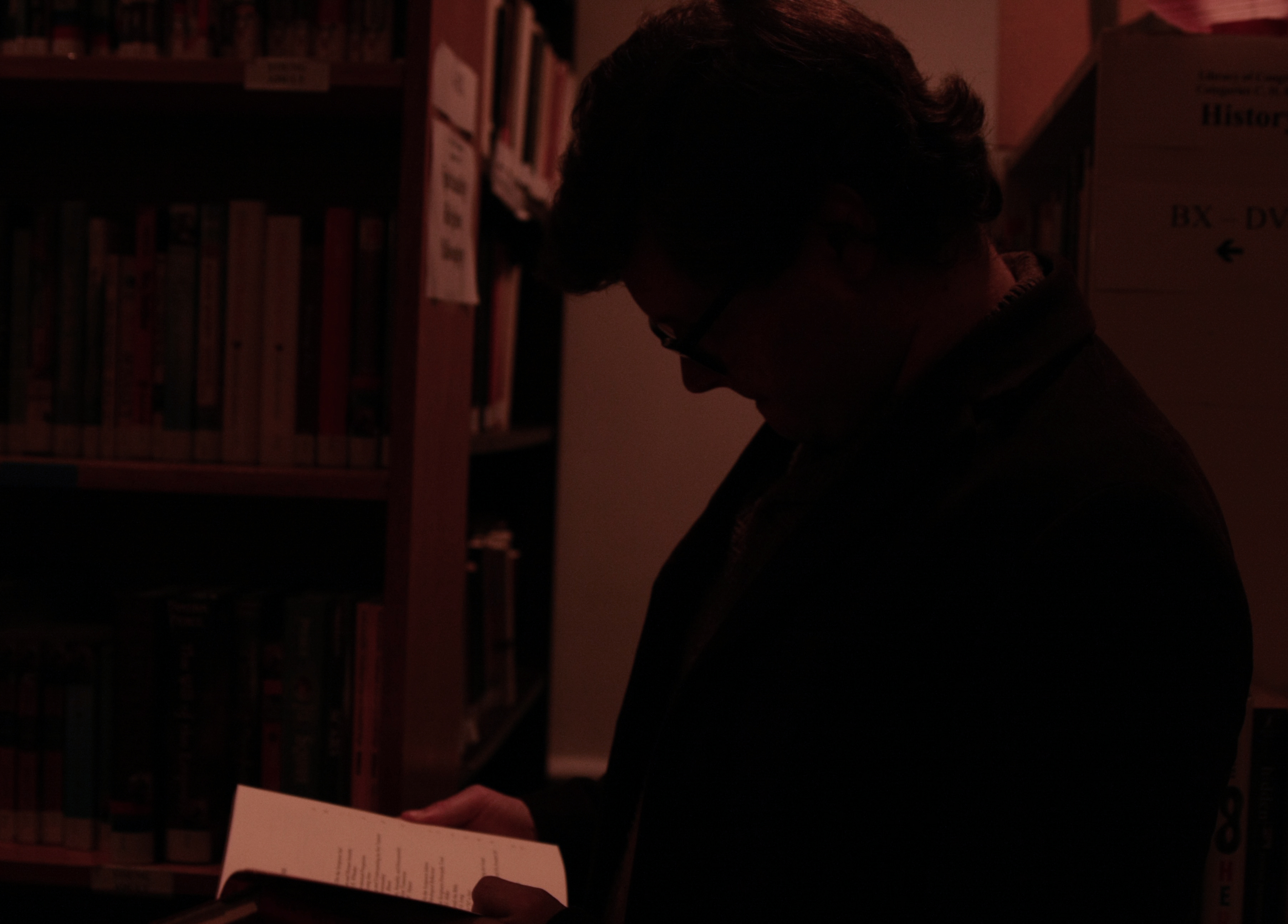 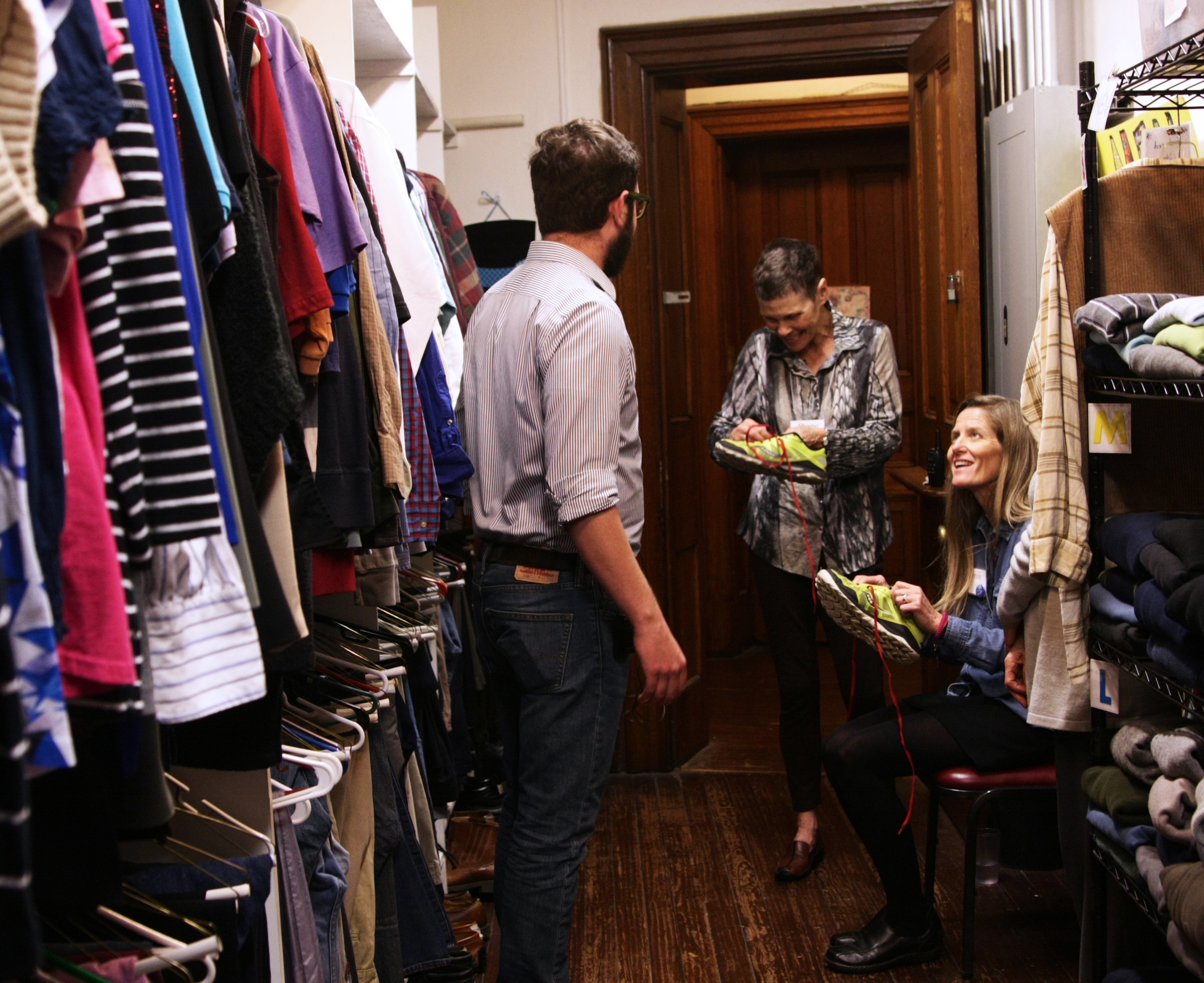 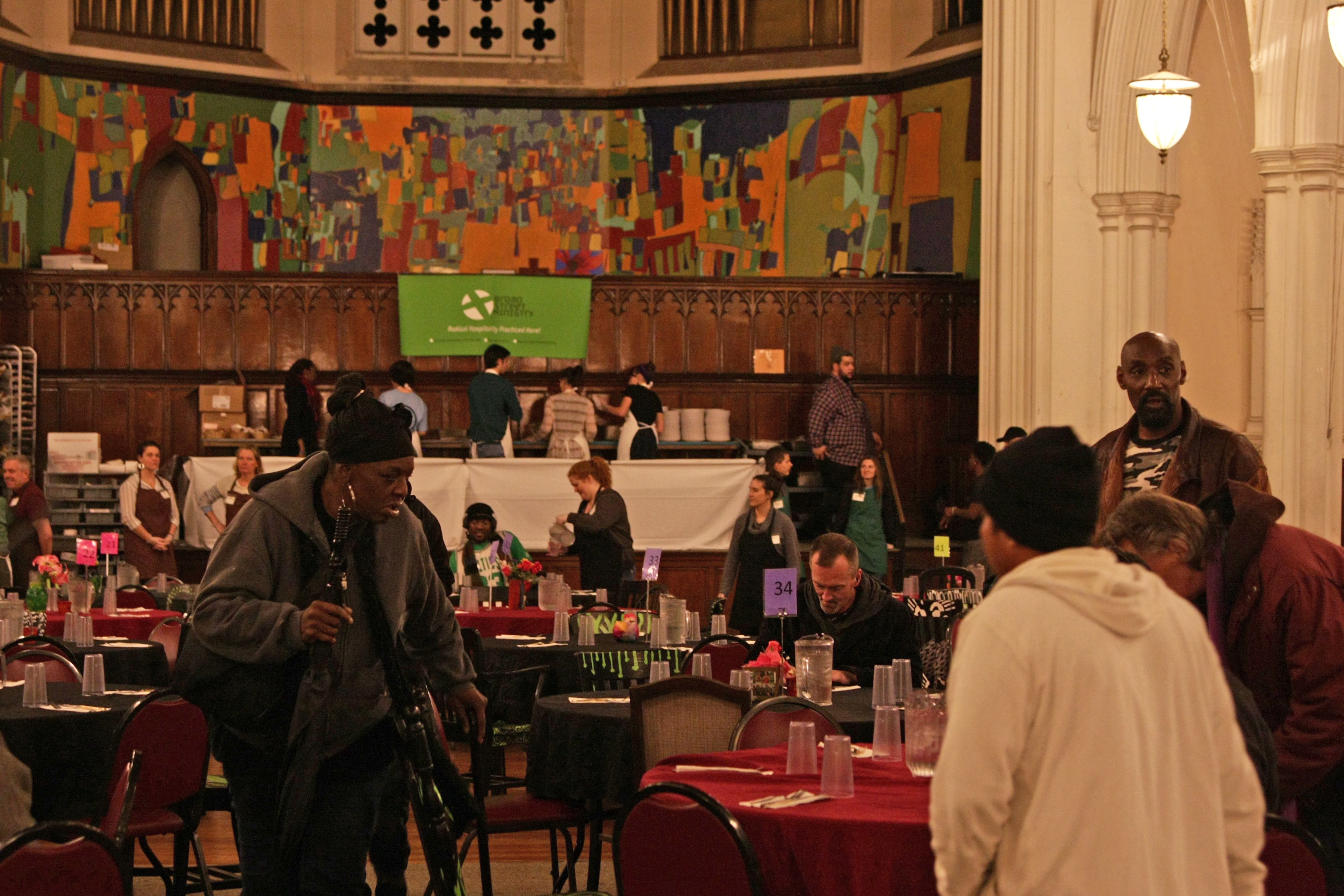 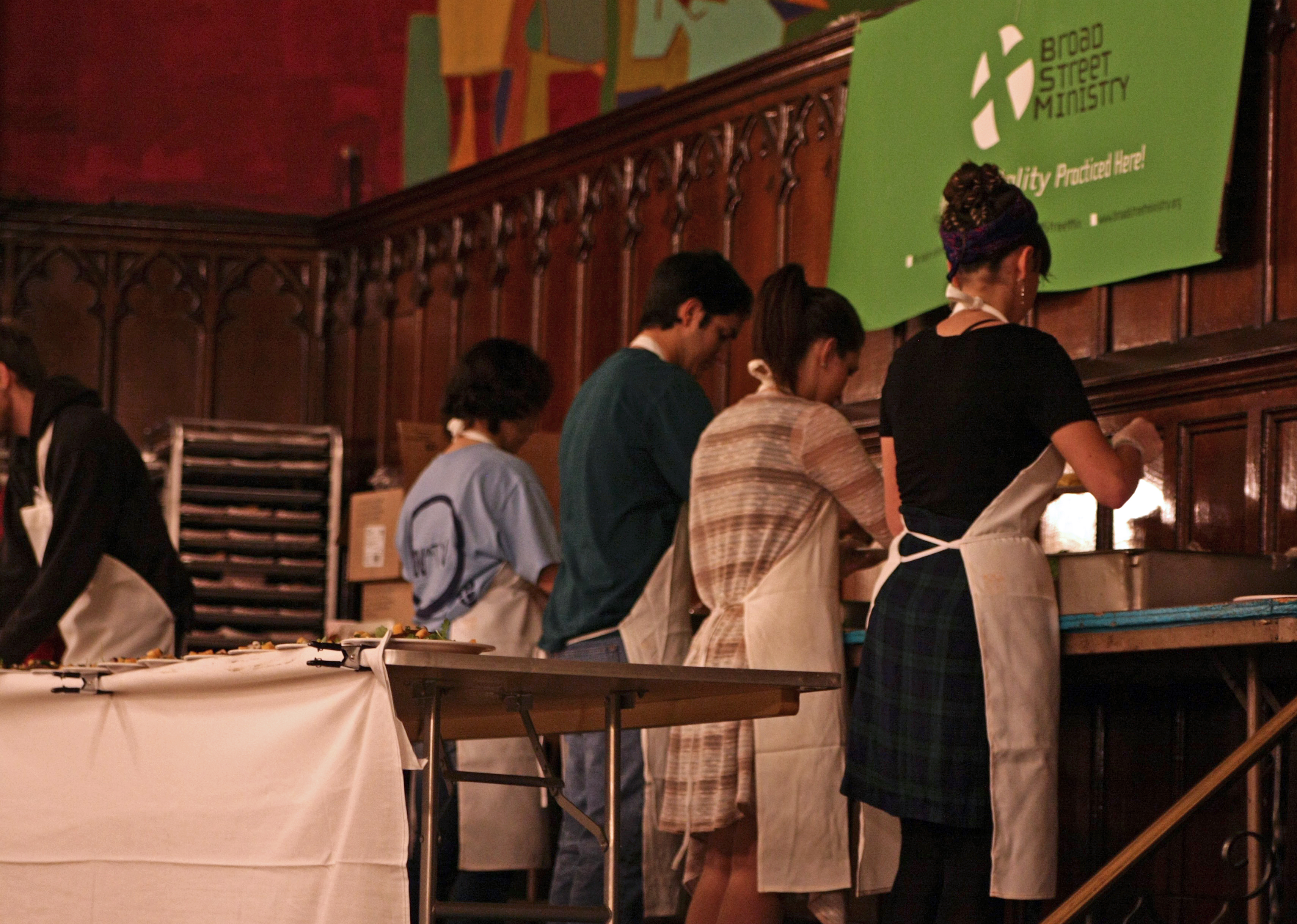 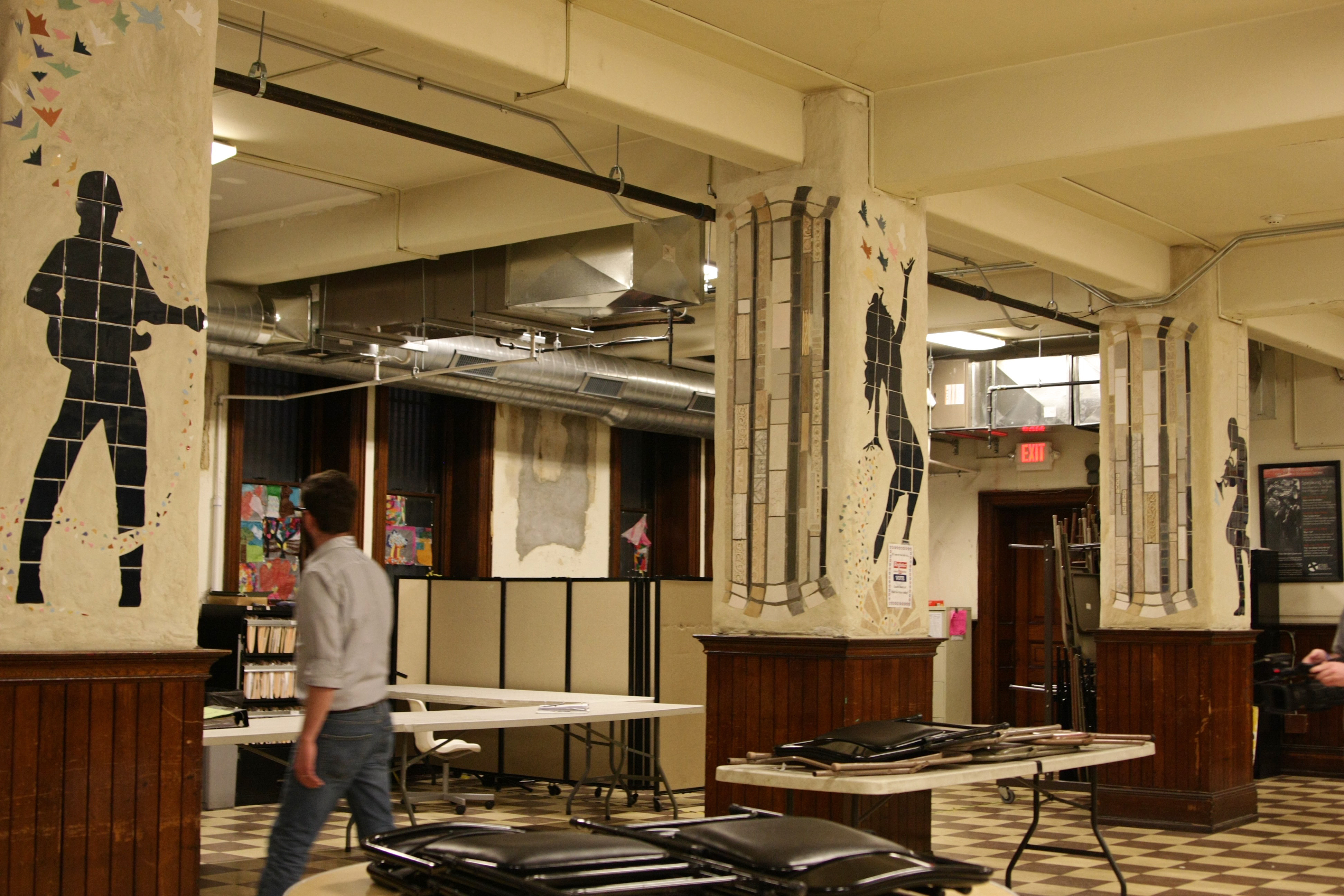 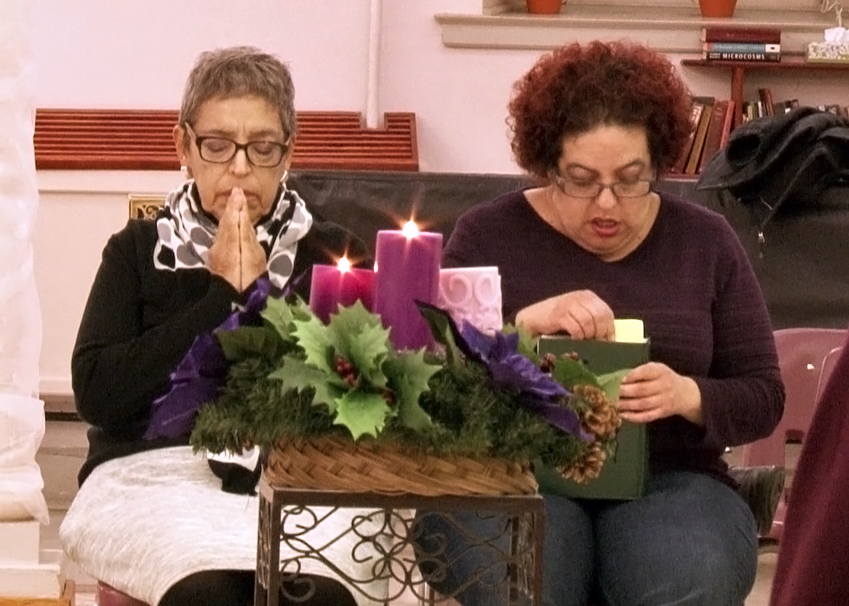 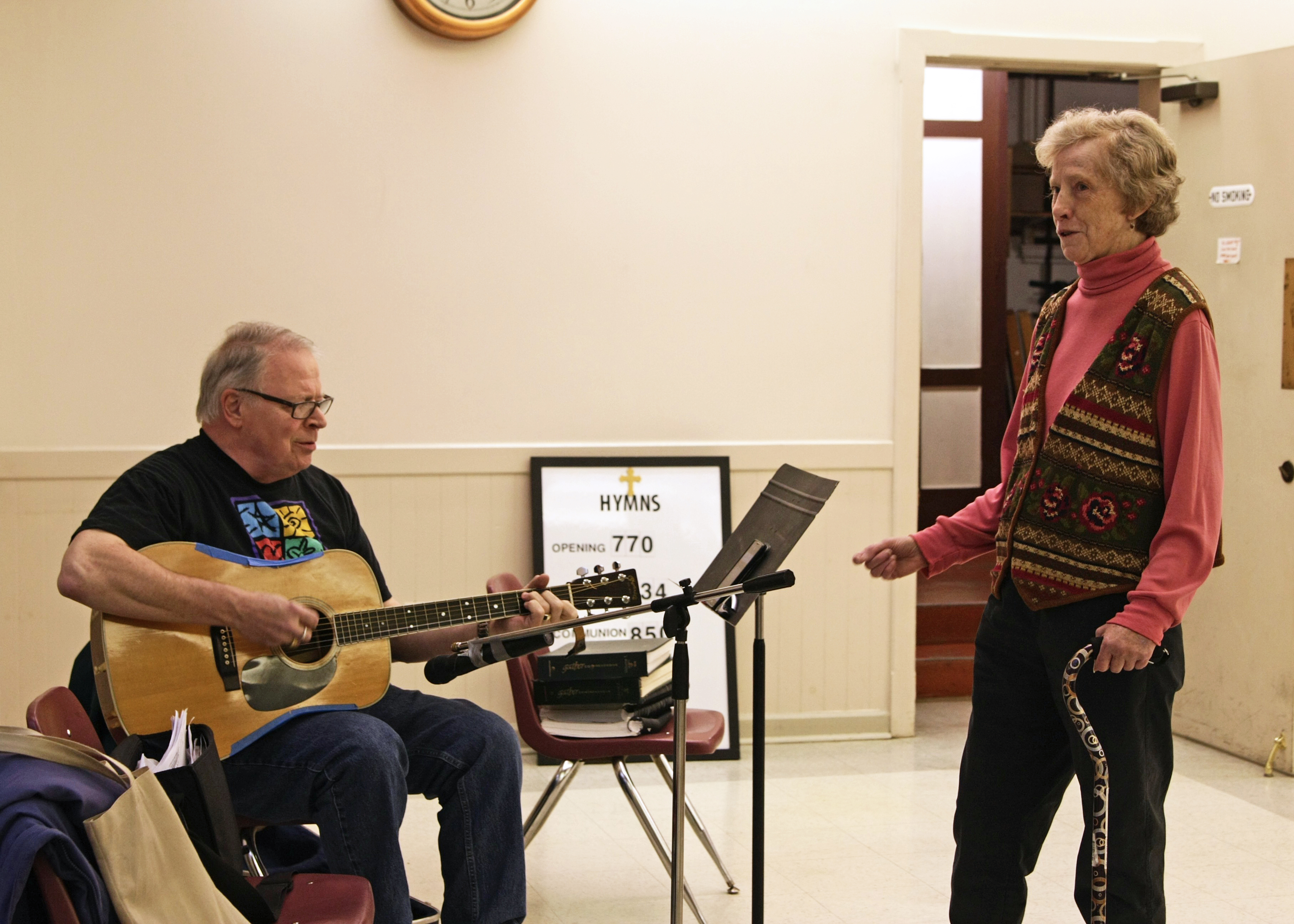 <
►
>
Michael Rocks and Alice, a fellow parishioner of Dignity Philadelphia, warm up for mass.

— Text, images, and video by Tom Dougherty and Moira Wilson

The Pope In Philly: “My Spiritual Practice Helps me Figure out Where my Place in the Universe is,” says R. Eric Thomas.

R. Eric Thomas is the program director at the William Way LGBT Community Center, which is holding a “Celebration of Inclusive Family” on Sept 26 and 27 during the papal visit. Thomas may be new to […]

After lunch is finished on Thursday every week, guests at Broad Street Ministry (BSM) begin to make their way downstairs. Immediately, the stations to collect personal care items and mail are swamped. The slowest station […]

R. Eric Thomas had been living in Philadelphia for about three years, not having found what he had moved here for. Then, one day, something caught his eye. “I just saw an ad in the […]