Bethany Welch (shown above) is the founding director the St. Thomas Aquinas Center, an organization affiliated with the St. Thomas Aquinas Catholic Church at 17th and Morris streets in South Philadelphia. The organization was created to support the diversity in the church’s community of parishioners who come to hear Mass in Spanish, English, Vietnamese and Indonesian. Many of the parishioners of St. Aquinas are immigrants, and the center has connected immigrants in Philadelphia with local resources involving citizenship, economic help and basic hospitality. Welch says the center’s mission to welcome immigrants stems from core teachings in the Catholic faith.

How did you become the founding director of the Aquinas Center?

My background is in Catholic-sponsored community development, so really looking at how the church can work as a social institution in neighborhoods. I’m certainly inspired by the faith component, but really in a hands-on, physical capacity, regardless of a recipient’s religious affiliation. I actually first came to Philly as an AmeriCorps VISTA, and ended up staying.

Are most of the people being served by immigrant outreach programs, like mental health counseling and language training, members of the parish?

We would consider anybody who’s in our parish in our geographic area, whether or not you’re Catholic. Geographically, most of the people being served and empowered by opportunities here would be within this general neighborhood of South Philadelphia.

What are some ongoing efforts that you’re particularly proud of at the Aquinas Center?

What we’re trying to do is get our folks to speak about these issues [surrounding immigration], and then take those messages outside of the neighborhood. We can respond all we want to the needs on the ground all we want, but if we’re not changing hearts and minds of decision makers, of people that vote – a lot of people we work with can’t vote. 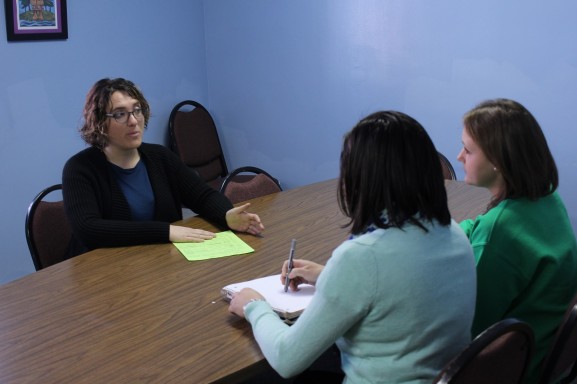 Do you feel like the faith component of the Aquinas Center lends itself to outreach work within the immigrant community of Philadelphia?

I think that part of what makes St. Thomas Aquinas unique is the language community. We’re the only place in the region that has mass in Indonesian. What attracts people often to a faith community, even tangentially, is that there would be people here speaking their language. And for those who are practicing Catholics, certainly the first place they might be going in their home country is to a faith community for charity.

Do you see interfaith partnerships happening to support this community?

Yeah, I think in different pockets. Within the Latin American community probably not so much, just because it’s predominately Catholic. The large number of folks would be Catholic. … The detractors, the sort of anti-immigrant sentiment, is so strong. If we were to try to do any of this on our own, we’d be foolish. There are enough people who are anti-this-kind-of-work that if we just all tried to do it alone we’d be crazy.

Does the Aquinas Center ever redirect members of the immigrant community to other organizations most applicable to their needs?

Yes, and I think that’s the benefit of the Pennsylvania Immigration and Citizenship Coalition, PICC, because there we know the network and I’ll be on a phone call and it’ll be like ‘AFRICOM is doing this thing’ – I remember during the Ebola fear and anxiety, AFRICOM was working really hard to educate people about what was happening and say local people aren’t a threat to others. 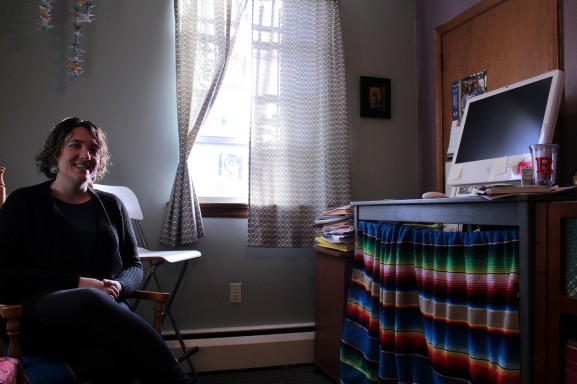 It seems as though the Aquinas Center is very focused on the shared human experience. Is this direction something that emerges naturally in your work or something you’ve pushed for?

I think the work attracts a certain type of person. Hospitality is something big that we’ve always pushed for – coffee, food, water that can always happen regardless of language. That’s really huge. I would say that Monsignor [Hugh] Shields, who invited me to work here – this is his vision.

There are going to be different kinds of people with different socioeconomic statuses, different faith experiences, caring about each other. The very basics of dignity of the individual person is part of the Catholic social teaching. If you recognize that everyone has inherent dignity, then how we’re going to treat each other is very different, regardless of any of those other barriers or things that separate us. 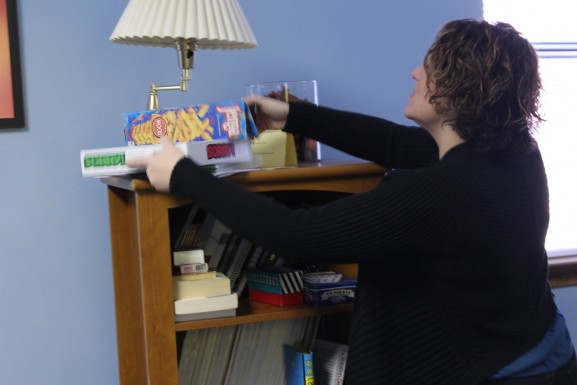 Now that Philly is once again a sanctuary city as of this month, how has it affected the Aquinas Center, if at all?

The only thing that lets this really delicate thing happen is trust. Even when we’ve had a tremendous amount of street crime and vandalism and we have cops parked in the parking lot, people might be less likely to come into English class because the police are here. It’s a double-edged sword. It’s early to know, but I think it’s a positive thing.

– Text and images by Erin Edinger-Turoff and Joe Brandt.

Amy Eusebio holds a background in social work and has utilized that experience to go into helping immigrants that need assistance with getting immersed/adjusted to the United States, and more specifically Philadelphia. [continue reading…]

An organization where people can learn and grow on the basis of creating a well-rounded community is essential to the South Philly neighborhood of Point Breeze. “Diversified Community Services is a neighborhood-based nonprofit, so we [continue reading…]

With nine restaurants in Philadelphia alone, Iron Chef Jose Garces is synonymous with the city’s culinary culture. A second generation immigrant, Garces uses his success to support the Garces Foundation, his nonprofit that works to [continue reading…]