Steve Sabo is the executive director of Point Breeze Community Development Corp. (CDC). Sabo has worked for over a year-and-a-half at the CDC, starting there in August 2014. A graduate of LaSalle University, Sabo not only works in Point Breeze, but he has also lived in the neighborhood for nearly seven years.

How did you get into this position?

I also, in 2014, ran for committee person in my division here in the 36th ward, and was unsuccessful. It was my first real taste of Philadelphia politics, and how ugly it can be sometimes, but it was also an education as to how important street-level politics are. 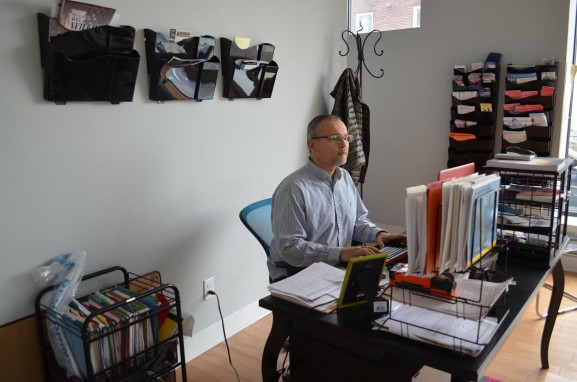 What exactly does this corporation do? What are its goals?

Our major goal is to help commercial development on Point Breeze Avenue. Point Breeze Avenue was at one time a booming street of any kind of business you could imagine. It was once a bustling commercial corridor, and if you walk down it now, the majority of buildings are actually vacant. Some of the businesses, there’s three, four, five types of the same business, and it’s severely lacking in basic amenities. It’s tough to find fresh fruit and vegetables without having to get into your car and drive someplace for it, and that’s a really horrible thing.

It’s our goal to help spur growth, especially along the commercial corridor of Point Breeze Avenue. In addition to that, we provide a place where people can come in, as you can see we have extra computers here for people who are looking for work, who may not have a computer at work, to do very basic things that a lot of people use computers for these days.

We’re involved in things like neighborhood cleanups. One of my pet peeves is trash … so I try to make sure that the CDC is involved in keeping, at the very least, this five-point intersection as clean as possible, and helping to get residents more involved in getting out and doing basic clean ups and things like that. 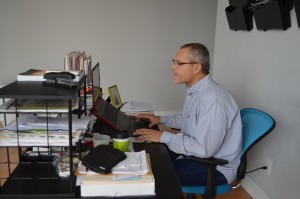 On a regular day, what are your duties?

I try to, through various contacts, find businesses that may be interested in coming to Point Breeze Avenue, which has proved to be pretty difficult for any number of reasons.

Over the course of the day, we have people that come in here looking for certain services that we can help them with. A lot of seniors will come in looking for help. A lot of that on my end consists of pointing them to the office of their elected officials, because they’re services that are provided by the city, by the state. Also helping anybody that happens to come in and need to use a computer.

These aren’t advertised services that we provide, but if someone comes in looking for help, we just kind of, at the risk of sounding corny, try to be a “shining light” in the neighborhood and help any way we can.

What are the major issues facing people in Point Breeze?

Poverty, unemployment, education – those are pretty major issues. One of the biggest complaints that I hear on a daily basis is that there are no jobs here, and that’s really frustrating. There are people who want to work and there’s just nothing, which leads me back to our mission of trying to get the commercial corridor back to its original state of 25, 30 years ago.

Crime is still an issue here, safety, there’s still a bit of a drug problem, which could be scary to some people. It’s one of the reasons Point Breeze became what it became.

As far as the issue of Point Breeze developing as a neighborhood, there’s racial tension. That’s still a pretty big problem, which is unfortunate. I get it that there are people who have been here for 30, 40, 50 years, and they’re struggling, and they see people moving in who are perhaps a bit more affluent than they are, and it could create a little bit of tension. It’s unfortunate, but it’s a reality of it. So, the socio-economic situation in Point Breeze definitely could stand to improve, for sure, that’s a huge thing.

Do you think the general public should be more involved in helping neighborhoods like Point Breeze? If so, how?

It could be as simple as getting out a couple times a week to sweep in front of your house, because you’re out there and you actually get to meet your neighbors. People definitely need to get involved on a very basic level.

As far as some of the problems in the neighborhood – with people who aren’t thrilled that expensive houses are being built, or people are moving into the neighborhood – they’re spreading fear of people losing their homes because they can no longer afford the taxes. There’s a lot of misinformation out there and it’s coming from a very small group of people.

Overall, I think people are for development, because what happens when a blighted neighborhood starts to develop? It starts to get cleaner, it starts to get safer. I think that’s what a majority of the people in Point Breeze want, and that’s what’s happening. It’s becoming safer, cleaner, friendlier, I think.

– Text and images by Miranda Greenberg and Santina Pescatore

Small businesses are no stranger to Chestnut Hill. Shops, boutiques and restaurants flood Germantown Avenue. Whether it is an upscale clothing boutique, a small frozen yogurt shop or a historical store a customer wants, their [Read More]

Poplar residents raised concerns about an influx of college students and the lack of adequate parking after hearing a proposal for a new six-story development at a neighborhood meeting last week. More than 30 people [Read More]

Bridal fashion receives a fun, new twist at Lovely Bride, an Old City boutique that specializes in non-traditional gowns featuring indie designers from Etsy along with the classic names in the industry. Non-traditional in bridal [Read More]