Phyllis Jones-Carter provides the magic behind the thriving consignment shop located on the 3800 block of Lancaster Avenue. Jones-Carter actively supports the neighborhood and works to strengthen the community in hopes of helping it thrive the way A Part of Me has.

“Having a business that hasn’t closed, a thriving business – being open, being here, in terms of wanting to help, I think about it all the time,” said Jones-Carter (above).

She explains having a presence on the avenue contributes to the neighborhood in more ways than one. No other shop like it stands in the area. In the past there have been similar shops, including a consignment shop focused on children’s clothing, and another focused on men’s. Neither of these shops are open today.

The Association of Resale Professionals known as NARTS estimates industry growth of approximately 7 percent a year, which takes into account the number of new resale stores opening each year minus the businesses that close.

According to First Research, the used merchandise stores industry in the U.S. – which includes resale shops, consignment shops, thrift shops and antique stores – includes about 18,000 stores with combined annual revenue of about $12 billion.

However, for Jones-Carter, her presence in the area has become about more than just making a profit.

“It’s not all about making money,” said Jones-Carter. “It’s about, for me, it’s more of a mission.”

Her mission focuses on support – support of her customers, support of the surrounding businesses and, most importantly, support of the community around her. The mission begins within her shop, which she explains provides a type of “therapy” program to all who come. Aside from the items for sale, the store features a sofa for people to feel comfortable coming in to talk and have conversation, drink wine, eat lunch and then shop. 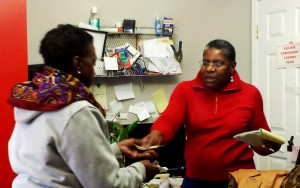 She finds community interaction and conversation has importance in a neighborhood. Aside from regular store hours, Jones-Carter provides workshops, book readings, live music and more to help bring people together in the community.

“It’s just nice to have a bunch of people come in, just to sit around and talk, just to get people together,” said Jones-Carter.

Linda Gumby, store manager of A Part of Me, explains Jones-Carter provides an enjoyable place where “you can forget about a lot of things you want to forget about. You just have a lot of people talking and laughing and telling stories.”

Within the store and in conjunction with the gatherings Jones-Carter provides for the community, she helps to support local artists. She brings in artwork, books, jewelry and clothing of theirs to either sell in the shop, feature at a gathering, or both.

“We try to help everybody out. It’s just a fun thing, like our mission,” said Jones-Carter. 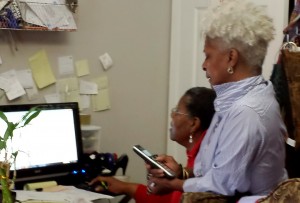 “When people come in and they have events, even if Phyllis can’t go she’ll buy a ticket,” said Gumby (right, standing).

“We’ll do anything, we’ll even take your kids for you,” said Jones-Carter, something she has already done. She shares a story that makes up her most memorable moment since opening A Part of Me in 2011. She would watch a woman with three kids pass by the shop every day on their way to and from school. Jones-Carter told the woman she could leave her youngest with her until she returned. Eventually, a day came where the woman asked a bit more of Jones-Carter, requesting to take on her three kids while she took care of herself through a two-week rehabilitation program. Jones-Carter happily accepted.

“It wasn’t through foster care, it was, ‘Can you take my children?’” said Jones-Carter.

Jones-Carter also provides a mentorship program in conjunction with the Philadelphia Youth Network for young girls to learn and work. The girls are often young single mothers who haven’t finished high school. Jones-Carter and Gumby share how they help to guide them back on the right track.

“We give them our mother wit, tell them what they need to do,” said Jones-Carter. 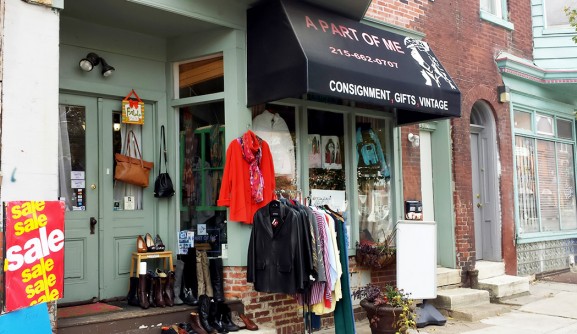 Other ways Jones-Carter works to support the community include providing clothing to those who need it. She places a box filled with clothing, jackets, shoes and more labeled “Free! Free! Free!” outside the shop, encouraging those in need to take what they need. The things inside the box are items she is unable to sell or can’t use. She has provided gloves and hats to shelters in the past and also grows a garden behind her shop to provide her customers and those in need with fresh produce.

Students at Saint Joseph’s University were hoping at best to catch a glimpse of Pope Francis as his motorcade traveled down City Avenue. Many students were planning to gather together to watch the festivities on television. [continue reading…]