Warren McMichael and Talmadge Belo of Sharswood say they have seen it all in terms of construction and development in their neighborhood. The lifelong residents retired from their careers in education and manufacturing, respectively, to bring as many resources they could get their hands on to their struggling streets. McMichael, the president, and Belo, the vice president, of the Brewerytown-Sharswood Community Civic Association, which works out of the neighborhood’s clubhouse at 1425 N. 23rd St., have grown their organization in its 16 years to 10 elected members, young and old, who are passionate about preserving their community.

What has changed about your neighborhood?

Warren McMichael (WM): When I was in elementary school, this was a middle-class neighborhood. You didn’t see any empty houses, Cecil B. Moore [Boulevard] was known as Columbia [Avenue] then. Businesses on Ridge Avenue were fully functioning. There were different racial groups living in the area. When I went to elementary school, it was a fully integrated elementary school at that time. Somewhere in the 1950s, there was the ‘white flight’ in the community, and of course the Afro-Americans were having difficulties prior to that getting mortgages and buying homes. There used to be knitting mills downtown, lumber mills.

Talmadge Belo (TB): All those mills closed down. This area — it devastated it. There’s a lot of folks like us that hung in there and suffered through the times that were tough. You have to have experienced North Philadelphia in the ’50s and saw what happened to it in the mid- to late-’60s and then see how, over a period of time … we ended up with a bunch of empty lots, trash strewn. We’re the dumping ground of the whole city. People have come through with their trash and dumped it, because this is the dumping ground. 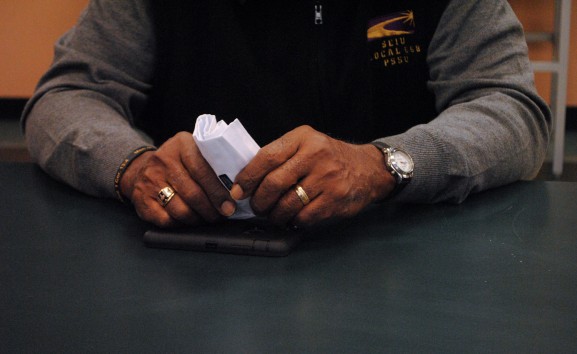 What does ‘Community Civic Association’ mean?

TB: We formed mainly to get information. It’s not like a community development corporation – that goes after money and builds houses and certain projects. We started off by just wanting to clean the streets, and moved on to getting presenters to come down and tell the community what’s going on in the city. Civic Association’s main mission was to get information from the hierarchy down to the community.

What are some of the things you’ve done to get that mission accomplished?

TB: We’ve established monthly meetings with the community. That includes presenters from all facets of life – politicians, clergy. We’ve done things like a bike share, which is the newest thing. We brought in a group of lawyers and judges at one time to talk about the legal system and the criminal justice system for people to interchange and talk back and forth and find out what’s going on out there. And we adopted four schools.

WM: And then three schools closed: Reynolds, Vaux and William Penn, which Temple [University] has bought that property. Reynolds was an elementary school and Vaux was a middle school, but it was changed to a Promise Academy high school. We thought it was doing pretty good. 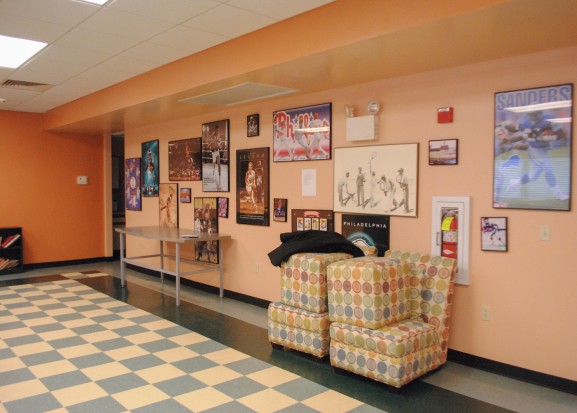 TB: One of the other things — we started a financial literacy program at Vaux. Vaux also had a medical program, also, that weren’t directly involved with, but we did promote it. And then Klein, we work with them.

WM: The Klein Wellness Center, I went down and made testimonies with city committees for them to get some of the funding they need. We were at the groundbreaking.

TB: We work with Habitat, we work with Project Home— gosh, in 16 years we’ve been doing a lot of stuff. 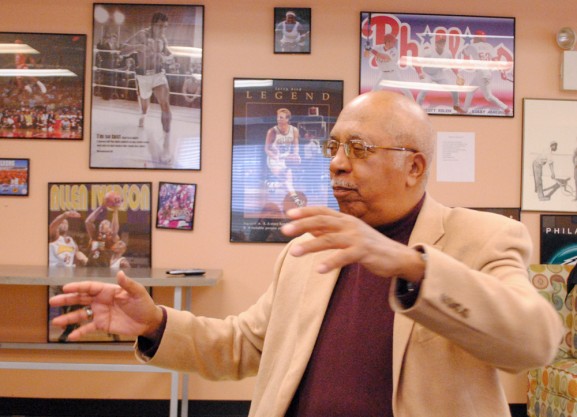 What do you hope for the future of this neighborhood?

TB: For me, what I’ve seen is that this area has been discovered. People have figured out what we knew all the time. When this neighborhood is discovered, people are going to come back. I see it being, and I hate to use this term, but I see it being gentrified. I think another five, 10, 15 years, we’re going to see all the business corridors reinvent themselves, new businesses coming in, just like Girard Avenue is having now. We’re going to see more housing at a higher-end than affordable. Some of what we are trying to do is make sure that some of that affordable housing does stay here and people that want to stay here can stay here. And that people who want to leave get a fair deal. I had someone say to me, ‘Your area is getting gentrified, that means a lot of people will be getting kicked out.’ And I said to him, ‘The alternative is what? To remain the same? To see the trash, the garbage just dumped, people just disrespecting us? Criminals doing their thing, unchecked?’ Something has to happen. This organization just wants to be at the table. We surely can have our voices heard and maybe make a change.

WM: What I don’t want to see is what happened in Francisville – they went in and built very expensive housing. We don’t want what happened in Northern Liberties, where it just turned right overnight. We’re afraid of that model, but we know it’s coming.

– Text and photos by Paige Gross and Victoria Mier

From an outsider’s perspective, Francisville has always appeared to be living in the shadow of its neighbor, Fairmount.  While Fairmount was developed with high-price townhouses and fancy restaurants, Francisville remained, for the most part, in [continue reading…]

Among the many interesting faces in Cobbs Creek, there are a few names to note. The neighborhood offers a variety of resources for community members, young and old, able-bodied and disabled. These interesting folks are [continue reading…]