When Steve Bandura gathers his baseball team, the Anderson Monarchs, at the Marian Anderson Recreation Center each year, his goal for them is to provide opportunity. The 54-year-old is known for being coach of Mo’ne Davis, the Little League World Series pitcher from the Taney Dragons in 2014, and notable alumni and NBA player Dion Waiters.

Each summer, the team travels across the region playing competitively, and every other year, goes on a barnstorming tour, where they learn about historical and cultural events while traveling the United States. In 2014, the team learned about Jackie Robinson and the Civil Rights Movement while traveling to 19 cities in 21 days.

When did you start your first barnstorming tour?

In 1998, I put together a team of 8 year olds. Five white, five black, and five latino kids from all over the city and called it the Philadelphia Stars.

You’ve been doing it every year since then?

No, I can’t. It’s too expensive. We’ve done four tours. This past year was the most unbelievable tour yet, the Civil Rights tour. A lot of the kids from the Little League World Series squad were apart of it.

Did you guys get a lot of money in 2014 after the Little League World Series?

No, it was mostly the MLB (Major League Baseball) and Chevy. We had a couple other local sponsors pitch in. It cost us about $75,000 to do (the Civil Rights Tour). 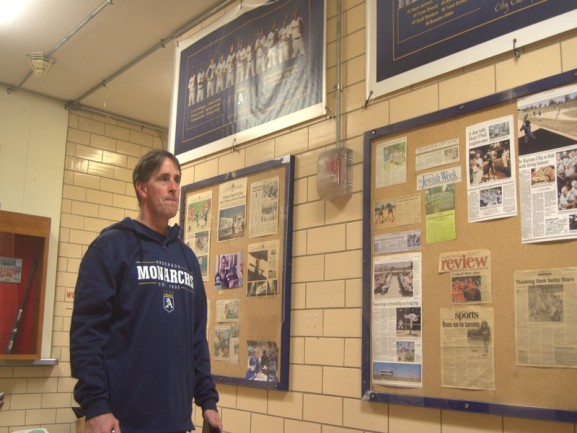 What do the kids walk away with from the tours?

I remember somebody asked Mo’ne, after all she’s been through, pitching in front of five million people on television, trending No. 1 one Twitter in the world, all these award shows, and the White House. They asked her what the most memorable part has been and she said the tour. It gives them a sense of identity and their place in the world now. If you understand the past, then you can understand the direction you’re moving in.

What is the most satisfying part of your job?

The most satisfying part to me, first, is when kids graduate from college. Every kid who came through our program from the time they were here and graduates from college gets a four-by-four sign. It’s got their name, school logo and the year. Most of them are the first people to go to college in their family. Second is when those guys come back with their kids and they’re good dads. That’s really satisfying.

How did you get the tour bus for the team?

So, the first year, a friend of a friend, whom I’ve never met, found out that we were doing this tour. He had a stack of these auto collector magazines called Hemmings, and he had thrown them all out except for two. In one, there was the only advertisement the guy ever placed for that bus. It was sitting, literally sitting, in a barn for 25 years. The next time in 2004 when we were going to do the next tour, the guy said he sold it to a bus company. And I thought, he probably maintained it and we could charter it. I called the bus company and they said, “No, we don’t do that.” Right before I hung up, he said, “It is for sale, though.” I said, “How much?” And he said, “$25,000.” Mitchell and Ness was sponsoring us, and I went in to talk to Peter Capolino, who was the owner then, and I told him the whole story. He asked how much and wrote a check. I talked the guy down to $22,000 and put the other $3,000 into the bus, and we own it now.

Are you proud of what you’ve done?

There’s so many misconceptions about inner-city kids who are African American in baseball, and it’s really incredibly satisfying to see these kids prove them all wrong.

What has surprised you during this process?

I really had high hopes for these kids when I started. This is where I’ve dreamed they could be and they’ve gotten there and even beyond. They set the bar really high. I can say this – it amazes me how kids can leave this environment and go to a Penn Charter private school setting and in no time become leaders in that community.

And college is always your plan for them?

Our goal is to prepare them for that, academically, athletically and socially. There’s signs on our fence outside facing the field, and people say to me, “Why don’t you put it on the other side so everybody on the street can pass by and see it?” I said it’s not for them. It’s for the kids on the field. We have six more college signs coming up this spring. We have a big ceremony for the families where we unveil the signs. When you sign up for this program, it’s not, “Am I going to college?” We’re trying to figure out where they’re going. It’s a done deal.

— Photos and text by Mark McCormick and Michael Guise.

The goal of the Philadelphia Youth Organization is to help educate kids in academics and athletics. The organization was founded in 1989 and is based at the Marian Anderson Recreation Center at 17th and Fitzwater streets. The PYO […]

https://vimeo.com/25104739] Providing instruction on playing baseball while also emphasizing the importance of education is the pitch of the Jackie Robinson League. This entity created in 1993 is apart of The Philadelphia Youth Organization that was […]

Although Ryan Howard‘s time with the Philadelphia Phillies has come to an end, his impact in Philadelphia is far from over. On a rainy fall night, more than a dozen aspiring baseball players worked on their swings at […]