“It was a total shock,” Mackenzie, 52, said. “I went for a Pap test at Planned Parenthood. They were checking my breasts and before I knew it, I was being tested for cancer.”

Mackenzie was diagnosed with stage 2 breast cancer in December 2012, before the Affordable Care Act was in full effect. The $8-an-hour-salary she was making at the warehouse was not going to allow her to afford the medical care she needed.

She had fallen into the Medicaid Gap along with 4 million other Americans, according to obamacarefacts.com. Her income was too high for Medicaid eligibility and too low to receive subsidies on the existing health care exchanges.

“I was at my wit’s end on how I was going to treat my cancer,” Mackenzie said. 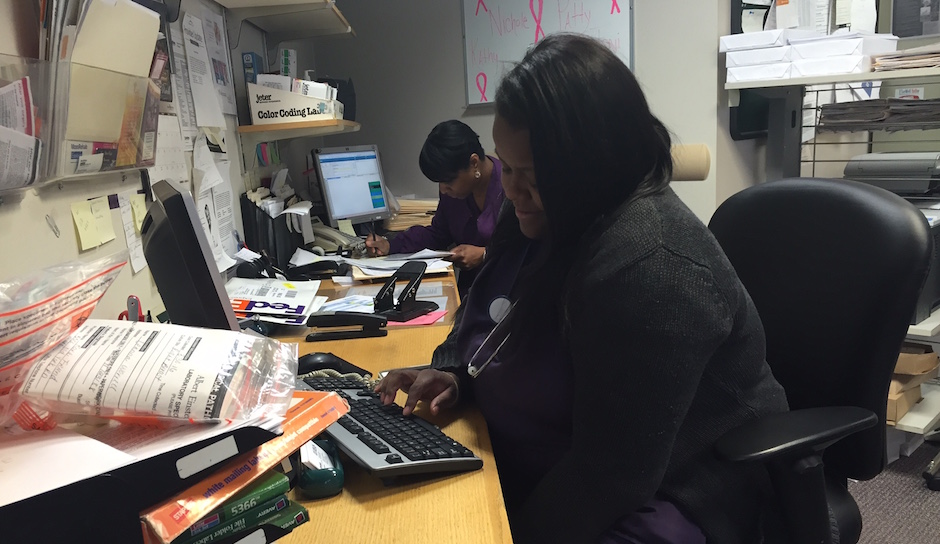 “Without health insurance, women are caught in a Catch-22 situation,” said Dr. Lisa Jablon, breast surgeon and project director of Einstein Health Network’s Women in Need (WIN) program. “Once they have a diagnosis of breast cancer, there are a number of programs offered through the state that provide them with access to treatment. But in order to get a diagnosis, they need a biopsy. And without insurance, getting a biopsy is prohibitively expensive.”

The mammograms and other extensive testing performed on Mackenzie at Planned Parenthood were not enough to confirm her prognosis. Mackenzie needed a biopsy and she simply did not have the means to receive one.

“I was stuck between a rock and hard place with the nation’s insurance problems,” Mackenzie said.

Within a few weeks, Mackenzie’s doctor had better news. The Planned Parenthood location had been in touch with Jablon who had a way to help Mackenzie.

Jablon is the head and founder of the Women in Need (WIN) program that runs through the Einstein Medical Center in North Philadelphia. As a grant recipient of the Philadelphia Affiliate of Susan G. Koman for the Cure, Inc., WIN provides care to women with breast problems, no matter their insurance status.

After hearing about Mackenzie’s situation, Jablon brought her in for a biopsy right away to confirm the diagnosis.

“Dr. Jablon saw me and treated me and did the biopsy even before I was ever approved for WIN,” Mackenzie said.

The American Cancer Society also found that those living without insurance or below the poverty line tend to have limited access to the proficient doctors. WIN breaks down the barriers preventing women from getting quality health care by providing them with access to expedient diagnostic care.

“Once they’re diagnosed with cancer, we help them apply for emergency medical assistance and help them get through that with health insurance,” Jablon said. “We never turn anybody away.”

After the biopsy confirmed her diagnosis, Mackenzie became part of the program and was referred to WIN’s financial counselors. The advisors set her up with an affordable insurance plan and doctors who were able to help her fight the disease.

“Financial counseling is probably a lifesaver, because I had no insurance,” Mackenzie said. “All you’re thinking is you’re gonna die. Why should people in this country die because they can’t afford medical?

“When I went down [to Einstein] they did counseling and told me that my treatment would be paid for through this WIN program and the funds provided by the Komen organization.”

The Komen Foundation provides the financial backing for WIN and other programs like it at other hospitals in the city. But Dr. Lori Jardines, also a breast surgeon at Einstein, believes WIN goes beyond the norm and stands out from similar programs in the city.

“We will pay for people to have biopsies, provide a thorough evaluation, offer financial counseling, do community outreach and provide uninsured women with free mammograms,” she said.

It took one biopsy, months of chemo and radiation, two surgeries and years of ongoing medical treatment to rid Mackenzie of her cancer. The North Philly native is one of 350 women being treated by WIN every year.

“This program was literally a lifesaver for me.” Mackenzie said, “If it hadn’t been for [Dr. Jablon] and the WIN program, I would probably still be out there with breast cancer.”

Since 1890, the Philadelphia Protestant Home has been welcoming residents into its doors as a non-profit senior living community tucked in Northeast Philadelphia. The facility currently holds more than 600 residents ranging from different levels [continue reading…]