The Chestnut Hill library has been around for over 100 years – 109 years to be exact. The library is located at 8711 Germantown Ave. and is a huge fixture within the Chestnut Hill community.

“People love the library because it has a lot to offer to the community, especially to all the different age groups,” said Daniel Ryan, supervisor and adult/teen librarian.

But the library was recently closed for about three weeks – from Sept. 19 to 0ct. 10 – because of a ceiling leak.

“I can’t say if it was present before I started in June ’15, but I first became aware of it in the fall of that year,” Ryan said.

According to Lynn Williamson, chief of the Free Library system’s neighborhood services division, many patrons were upset about the news of the library being closed.

“They really enjoy using the library and its location was convenient for them,” Williamson said. “However, they understand repairs needed to be done, so overall they’re OK with the closure.”

Williamson works at the Free Library’s central branch at 1901 Vine St. She explained that Chestnut Hill library members were able to use that location or any other branch while their community library was closed.

“Overall, I am very happy the repair is happening, because I was always nervous about the ceiling leaking on members,” said Williamson (below). 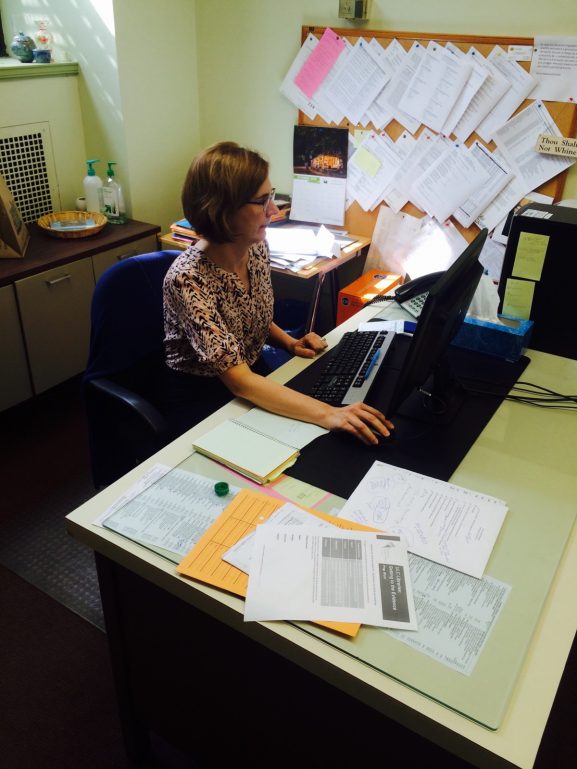 There are seven employees at the Chestnut Hill library and, during the time of the closure, they worked at different branches in the library system. Ryan worked at the Roxborough branch.

He was glad the problem would be fixed before it caused other serious issues, like a roof cave-in.

“Then the issue would no longer only be the leaking ceiling but much worse than that,” said Ryan.

Anne Kaplan, who has been a member of the Chestnut Hill library for more than 20 years, said she likes to go there every couple weeks for a new book.

“It’s a very pleasant place, and I love being there, although I am glad the ceiling is being fixed,” she said.

Amanda Bowman always imagined herself as a mother. When the time came for her to have children, she was presented with two surprises. The first: she would have to raise them as a single parent. [continue reading…]

We spoke with the Free Library of Philadelphia’s Northwest Area Coordinator Jeff Bullard, and Andorra Branch Librarian JoAnne Woods about how the Free Library serves the community in the Northwest, and also in what ways [continue reading…]

Over the past 30 years, Rebuilding Together Philadelphia has renovated neglected homes and assisted people earning low-incomes in specifically selected areas of the city. On June 1 and 2, volunteers, experts and neighbors reconditioned 10 [continue reading…]