Executive Director Wes Tudor and his group of instructors at Raja Yoga and Meditation Center of Greater Philadelphia are breaking down financial barriers and changing perceptions surrounding yoga one downward dog at a time.

In 2010, Tudor opened Raja Yoga after realizing Graduate Hospital was one of the few areas near Center City without a yoga studio. Located at 724 S. 20th St., in the heart of a gentrifying neighborhood, Tudor and the 11 other instructors offer 200-hour teacher training programs, guided meditations, and a variety of private and group yoga classes at this cozy, one-room studio.

“We specialize in the classic Hatha style, which focuses more on stretching, strengthening, and stress reduction,” said Tudor (below). “It’s become rare and hard to find these days.” 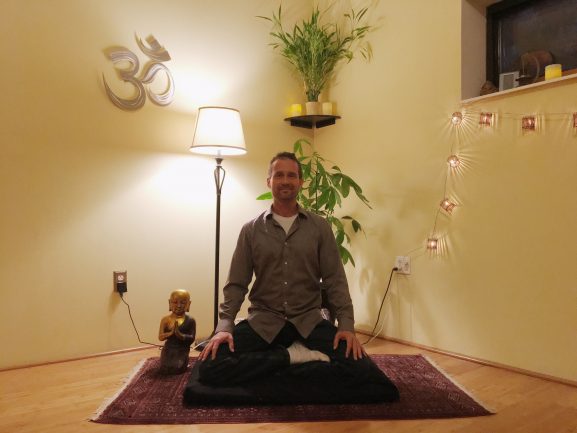 Emphasizing Hatha yoga as opposed to the more vigorous Vinyasa style is one of the main priorities for Tudor, as it makes yoga accessible to a broader range of people – but that’s not the only thing that sets Raja Yoga apart from other studios.

A year ago, Tudor collaborated with a like-minded instructor, Jennifer Riley, and other members of the yoga community to convert the for-profit studio into a tax-exempt nonprofit organization. Riley, now the secretary of Raja’s board of directors, hopes to spread the message of yoga and offer people a sense of community.

“The mission is to provide yoga to as many populations in the areas we can,” Riley explained. “Communities where yoga isn’t accessible, or as accessible, is the main premise for deciding where we take our programs.”

Raja’s current Nonprofit Outreach Programs reach a diverse range of populations: senior citizens at a low-income retirement home, students at Greenfield Elementary School and Chester Arthur School, international refugees in South Philly, cancer patients at the Hospital of the University of Pennsylvania, and Philadelphians with HIV, substance abuse or psychiatric disorders at The Community Living Room.

“Often the people who we’re bringing the yoga and meditation to are the folks who need it the most, but they either have financial limitations or physical limitations that prevent them from coming into a formal yoga studio,” Tudor explained. 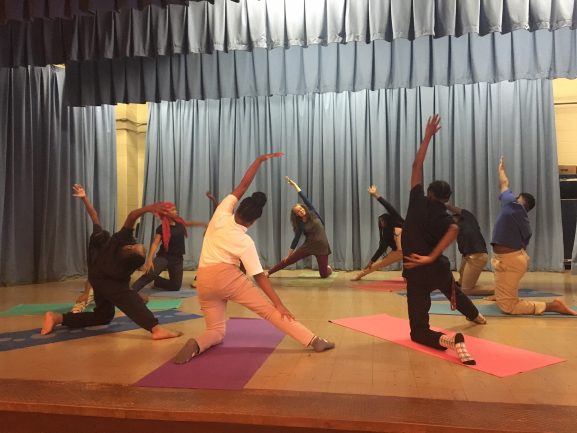 According to the 2016 Yoga in America Study, 75 percent of Americans believe that “yoga is good for you” and the number of people reaping its benefits has grown by more than 50 percent since 2012.

“We know now that there are over 40 million people practicing yoga in America, but it’s a shame what a narrow range of the population that is,” Tudor said.

Every Friday, middle schoolers at the Chester Arthur School in Graduate Hospital race to the auditorium to participate in a free yoga class, led by Raja Yoga instructor Kathy Revelle. She believes that exposing kids to yoga at an early age will encourage them to continue once they’ve moved onto high school and promote deep, belly breathing for the rest of their lives.

“Nobody really gives you permission to just sit and breathe that often in our society,” Revelle noted. “But now that the kids have re-discovered it, that’s what they seek out.” 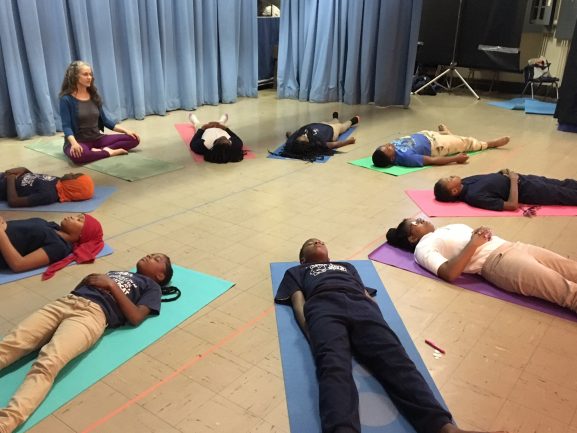 Tudor explained that infants breathe into their stomach when they’re born. However, as life becomes more stressful, their breath becomes more shallow, keeping the body in constant “fight-or-flight” mode. Harvard Medical School reported that upper-chest breathing contributes to anxiety, depression and a buildup of stress, which could lead to many serious health problems.

The faint snores heard around the room as the kids lay peacefully in savasana, the final resting pose, showed the true value of this kind of relaxation.

Given the mental and physical benefits of yoga, it’s no surprise that it’s turned into a $16 billion industry in America. However, with the average class costing $10 to $25, in addition to the perception that yoga is only for affluent white women, many people often miss out.

But who says you need to be able to afford three classes a week, $100 Lululemon yoga pants, or look like the women on the covers of Yoga Magazine and Yoga Journal to reap the health benefits of yoga and meditation?

Certainly not the folks at Raja Yoga.

Raja’s long-term goal is to raise more funds by expanding into grant-writing and crowd-funding so they can initiate more programs. Currently, outreach programs are funded by donors from the yoga community who believe in Raja’s mission.

“I think Raja Yoga is making a huge impact in the communities that it serves,” said Riley. “Ideally, we’d like to make it even bigger, but it’s something we’re accomplishing to some degree.”

Brewerytown: The Yoga Studio Opens Arms to Everyone

Emile Sorger, owner and founder of The Yoga and Movement Sanctuary at 26th Street and Girard Avenue, moved to Brewerytown in 2012. After witnessing the booming growth of his old neighborhood in Fishtown, he found similar [continue reading…]

Graduate Hospital: Climbing from Depressed to Head of the Class

“Up and coming” can describe many Philadelphia neighborhoods. Graduate Hospital is no exception. The southwest Center City neighborhood is bordered by South Street to the north and Washington Avenue to the south but one of [continue reading…]

Michelle Stortz has been practicing yoga for a little more than a decade but in 2008 found a new, profound purpose for the activity. Stortz’s husband, Jonathan Mark Lustig, was diagnosed with cancer. In an [continue reading…]