Jumpstart Germantown is a redevelopment program that was established in April, 2014 by Mount Airy real estate developer Ken Weinstein. The organization tackles the problems of blighted properties in the Northwest by training a new generation of developers how to invest in and revitalize real estate.

“I liked taking junk, something like old buildings, and doing something better with them,” said Weinstein about how he got into redevelopment.

The program is offered to approximately 20 new mentees four times a year: twice in the fall, and once in both the winter and spring. The course itself consists of three, three-hour training sessions (9 hours total) where Weinstein talks about how to maximize the opportunities of real estate development throughout the Northwest, before linking up each student with a mentor upon completion of the program.

Since its inception, Jumpstart Germantown has seen more than 150 mentees graduate from its mentorship program while redeveloping 35 properties. Interestingly enough, the majority of the mentees who go through the program are women and African Americans, not the typical white male developer.

With all of the success during its first two years of existence, the program has since expanded to several other neighborhoods throughout the city, including Kensington and Mount Airy.

The goal of the program remains simple: to improve the quality of life for current and future residents without drastically changing the current landscape of the community.

“An overwhelming number of people really like what we are doing and want us to do more of it,” said Weinstein of the reception he typically receives from residents.

But why the Northwest, when the neighborhoods that make up the coalition are stereotypically some of the whitest and wealthiest in the city of Philadelphia?

One reason that could be contributing to the increase in vacancy throughout the Northwest is that median housing prices have climbed over $150,000 in these areas, where the number of people below the poverty line is at 33 percent, according to the most recent census.

These figures can been taken two different ways. One is that redevelopment that has steadily been going on over the past decade or so in Mount Airy is causing property values to rise, and therefore pushing out residents who can no longer afford to live there (gentrification).

The other possibility being that newer redevelopment projects, like Jumpstart Germantown, are trying to improve a neighborhood that has become ridden with vacant housing units (below) for a more complex and deeper reason. 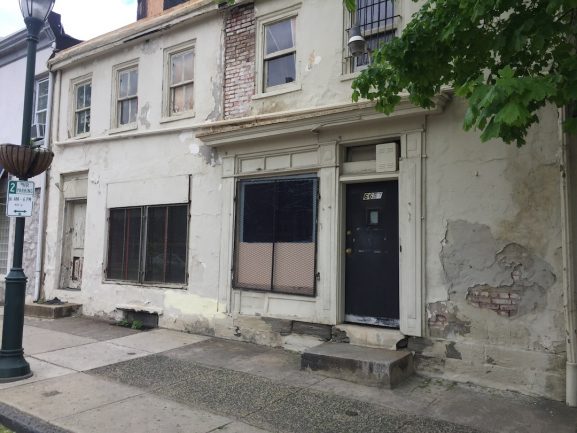 “We focus on using new developers to work on blighted properties in the area through the Conservatorship Act,” said Angie Williamson, the director of Jumpstart Germantown. “Then someone can apply to be the conservator of that property, fix it up and then either sell it or keep it. That’s a way to transform blighted properties into lively properties once again.”

The Conservatorship Act, enacted by the state of Pennsylvania on November 26, 2008, says that for the betterment of the overarching community, if a property owner fails to maintain accordance with municipality codes on a given unit for any reason (abandonment, deterioration, etc…), the Commonwealth has the right to “to appoint a conservator to make the necessary improvements before the building deteriorates further and necessitates demolition.”

In this case, by having mentees fix up properties that were already abandoned or deteriorating, Jumpstart Germantown is looking to revitalize buildings so that they can once again serve the community in a positive light, not push residents out of the area.

“Since I’m actually improving vacant and abandoned properties, and I’m looking to hold on to these properties [for rentals], I look to provide housing for people with low income,” said Doug Depte, a graduate mentee of Jumpstart Germantown. “I feel that I am not contributing as much to gentrification because I’m looking to get involved with agencies [Section 8 or veteran housing organizations] to help the community.”

Data from a Pew Charitable Trust report from May of 2016 confirms Williamson and Depte’s beliefs. From 2000-2014, there has been no significant “gentrification” in Northwest neighborhoods based on Pew’s income-based definition. In fact, the average income of people in many of the residential tracts of the Northwest remained the same or decreased.

“A key tenet of our mentorship program is that we are doing this [redevelopment] naturally and organically, and not wholesale knocking down a block, that way we are slowing gentrification,” said Williamson. “It’s not this extremely fast development. It’s doing it one house at a time so that the neighborhood can catch up and so it’s not displacing any residents that are there.”

As Jumpstart Germantown continues to revitalize neighborhoods in the Northwest at a careful pace that is not drastically changing the landscape of the community, there are however other regions of the city undergoing much quicker and harmful redevelopment.

Pew found that from 2000-2014, the 15 neighborhood tracts that gentrified throughout the city were working-class African American neighborhoods, like Graduate Hospital, old industrial areas, mixed-income neighborhoods in South Philadelphia, and some areas adjacent to Center City.

Other areas have also seen similar shifts, not only in the neighborhoods that gentrified, according to Pew, but in regions of the city where a lot of redevelopment is taking place, like Point Breeze and Templetown.

This large shift in demographics within a neighborhood can lead not only to displacement of longtime residents but also to a sense of disconnect between the newer and older members of the community, which is something that Jumpstart Germantown tries to avoid.

“There are always naysayers and haters,” said Weinstein. “As long as you know you’re doing the right thing and improving the communities in which you’re working, then you just have to stay focused and look straight ahead.”

Excited children, eager to raise their hands, are not characteristics often found in fifth-grade history classes. As Philadelphia is filled with much of the nation’s history, History Hunters was started as a way to involve [continue reading…]