“I was in high school working and one of the mailmen in the neighborhood mentioned karate,” Helmer said. “I was a big Steven Seagal fan, believe it or not.”

Helmer is now the owner and senior instructor at Amerikick Martial Arts in South Philadelphia, the same karate studio where he began training back in 1998. After a rapid ascent through the karate ranks, Helmer was a black belt by 2002, owner of Amerikick by 2003 and is currently a 3rd degree black belt.

“I became really good friends with the owner at the time [Michael Semeriglia], who is still my instructor to this day,” Helmer, 36, said. “He saw something inside me that shined out over the other students.” 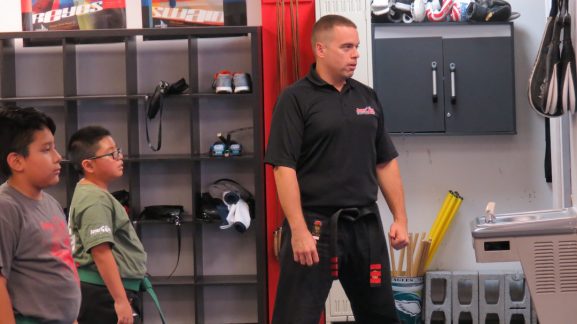 Semeriglia opened a second location in Haddon Heights, N.J. and named Helmer the head instructor for both locations. Then in 2003, Helmer took over full-time at the South Philadelphia location in his current roles.

“He took over when he was 23-years-old and he was a nervous wreck,” said Croseille Pongparnasena, a part-time instructor and long-time friend of Helmer’s. “We weren’t sure how he did it but he stuck with it.”

While he was always passionate about the art of karate, becoming an owner presented Helmer with an entirely new set of challenges. He spends most of the day doing the logistical work for Amerikick.

“I come in early, send out emails, answer the phone, book appointments, do all the office-type stuff,” Helmer said. “Teaching and office work can get a little stressful at times. I try to get my work done during the day so at night I can give all my time to the kids.”

Despite his busy schedule, Helmer still tries to continue honing his own martial arts skills. 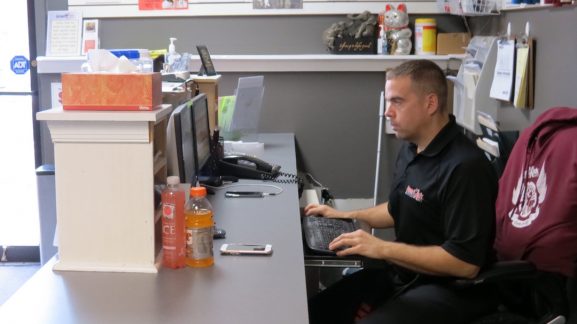 “It’s difficult to get to the proper classes I need to get to,” he said. “But I still train once or twice a week to stay on top of what I need to do for my students.”

Helmer is also conscious of the future of his business. He is looking to groom future instructors through his “S.W.A.T.” program. According to Helmer, the “Special Winning Attitude Team” is comprised of students who have showed “exemplary behavior and a love of martial arts.”

“We choose people who we see have an interest in others,” he said. “All my staff members are someone who I trained from a young age. I need someone that I can trust to work with kids of all ages.”

One of those students, 18-year-old Justin Yi, has now become a full-time instructor and Helmer’s right-hand man.

“Jason is very outgoing and he is not afraid to speak his mind which I think is very important,” he added. “You need that constructive criticism to keep [the kids] moving and keep them motivated.”

Spending time with his students was one of the main reasons Helmer transitioned to being an instructor early in his karate career. A South Philadelphia native, Helmer takes his role with the youth in the community very seriously. 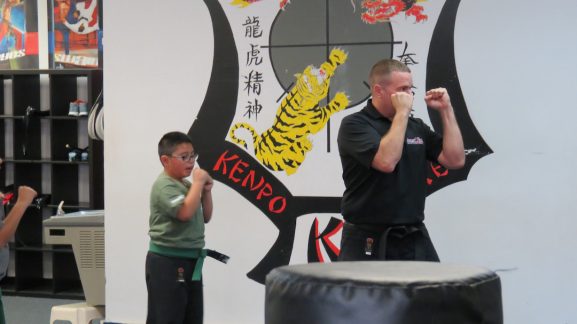 “Getting the kids off the street, especially in Philadelphia which can be very dangerous,” Helmer said. “We like to get the kids into a safe environment that can be very diverse. Male, female, Catholic, Jewish, all types of religions, all in one place, where they can be together as one.”

Since her nine-year-old son, Jaidon Hennessey, began lessons at Amerikick, Lisa Jackson has seen a change in him, particularly in his behavior.

“He’s taught me that we learn from mistakes,” Hennessey said. “I learned that fighting isn’t always the right thing to do.” 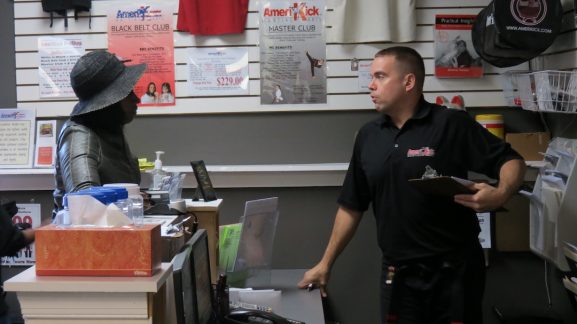 While self-defense and the art of karate is certainly at the core of Helmer’s teaching, he also understands the life skills that martial arts can teach his students.

“It’s unbelievable when people come back and tell me they feel more respectful, disciplined and courteous on top of being fit,” he said. “We try to instill confidence in all of our children, get them to be leaders and not followers.”

With roughly 150 students currently enrolled at Amerikick, Helmer’s plans for the future include expansion.

“I would love to see this facility have over 200 students and expand to possibly a second facility,” he said. “I want to expand my own personal knowledge for this community.”

-Text, images and video by Tim Merrick and Ben McWilliams.

When William Penn was designing Philadelphia, he mapped out his ideal city by using a grid system. Modern day Philadelphia greatly differs from Franklin’s plans but his first assigned plot of land remains in existence [continue reading…]

On Monday nights at The Irish Times, a small, intimate pub tucked away at 2nd and Bainbridge, Mike Dougherty can be found hosting his weekly open mic nights. Dougherty, a Mayfair resident, started the series [continue reading…]

“Well, the simple answer is for love,” said London native, Elena Brennan, explaining why she came to America in 1985. After getting married in London, she and her husband at the time moved to the United [continue reading…]