Beyond its popular and busy live music scene, Philadelphia has a number of small labels and record stores that stand behind heavy metal artists. These labels help to build artists, local and otherwise, from inside the city.

One such entity is metal label Horror Pain Gore Death Productions. The brainchild of Mike Juliano, the label has amassed almost 150 releases since its 2008 formation.

“In early 2008 I was attending a lot of local concerts and talked to many bands that were looking for a label,” Juliano said. “And as a fan of the local music scene, I decided that it would be a good idea to start a label.”

And where there are record labels, there are record stores. Vinyl Altar opened just off of South Street in fall 2014 and has been steadily growing and supporting the local community ever since.

Beyond helping local bands that he enjoyed find a home to release their music, Juliano would have the opportunity with Horror Pain Gore Death to reissue classic records from classic death metal bands Master and Deceased. Another advantage of starting a label was that he could release music from his own band, Mental Funeral.

Horror Pain Gore Death’s origins began before its official launch eight years ago. In 2005, Juliano was looking for film and video work, but having little success finding jobs. He ended up editing clips of old horror movies with metal songs from the 1980s, which eventually were released as the DVD collection Horror Pain Gore Death.

These DVDs ended up being sold by a variety of underground labels and distributors, which led to Juliano being exposed to a variety of new, underground metal bands. Combined with the fact that he was going to a large number of shows and meeting and hearing bands that needed a label, Juliano began Horror Pain Gore Death Productions. The first release on the label was Ex Dementia’s record In The Chapters of Horror in November 2008.

When Juliano started the label, the musical landscape was different for artists and labels than it is today. 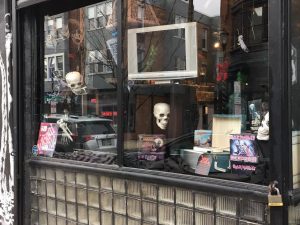 “I was lucky enough to start Horror Pain Gore Death at the right time before the digital boom hit and while several small labels were still around and trading,” Juliano said. “As time has gone on, I’ve learned the importance of Bandcamp and other digital outlets, which initially I was against.”

“Tape traders networked via the pen-pals section in English hard-rock magazines like Kerrang! and the now-defunct Sounds,” Lew wrote in the article. “There were few independent record labels at that time catering to the metal crowd; we traded demos and live tapes by dozens of bands who didn’t have a record out.”

As websites like Bandcamp – a popular online retailer for artists independent and signed, as well as labels, to sell their music – became more commonplace, Juliano had to adapt his label to fit the digital model.

As well as releasing certain pieces of music exclusively through Horror Pain Gore Death’s Bandcamp page, such as No Gods’s self-titled EP, Juliano has seen his sales of physical CDs increase by using Bandcamp to sell them.

Smaller, local bands like No Gods are able to benefit from labels, even through digital-only releases, because the label introduces the music to a much wider potential audience. 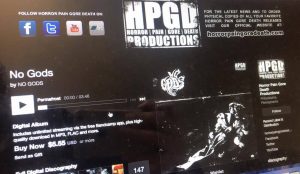 “Horror Pain Gore Death represents a healthy amount of extreme metal bands we consider ourselves similar to,” No Gods guitarist and vocalist Joey Torelli said. “So if someone knows of the label’s track record they can check on the new releases and find us.”

Though many have tried to sway Juliano into relocating his label to a city like New York, there is a special attitude that he sees in Philadelphia that he enjoys.

“I love the Philly mentality,” Juliano said. “It’s very tough to win over a Philly crowd, as we see through the bullshit and are passionate about music.”

Juliano does admit that he thinks punk and hardcore are bigger in the city — no surprise when Philadelphia hosts This Is Hardcore Fest, one of the most renowned hardcore festivals in the world. But there is an increasing number of metal shows happening in smaller venues and spaces, including bars like the Kung Fu Necktie and even basement shows.

“I have noticed a positive effect as the city is more open to heavy music now than ever,” he said. “The scene never really dies in Philly.”

– Text, images and video by Vince Bellino and Morgan Green

Waterfront: Penn Treaty Park is a Green Block in an Urban Landscape

Philadelphia folklore suggests the turn of the 16th century brought along the founding of peace between local Native American Lenape Clan and one of the city’s most famous icons. Legend has it William Penn brokered a peace […]

In 2011, Stanford Thompson created Play on, Philly! with the goal of changing the lives of Philadelphia youth through music. With the help of Carole Haas Gravagno and a few other dedicated musicians and sponsors, […]

For the past year or so, think pieces from publications such as The New York Times, Billboard and SPIN have been presenting a simple thesis – vinyl is back. But if you live in Philadelphia, you probably already knew […]