David Ertz peered out his office window at the evolving Center City skyline he is helping to create.

“It is kind of remarkable, what’s going on,” said Ertz, a partner and design architect at Cope Linder Architects, located at Market and 17th streets. The firm has designed buildings in the neighborhood like 1706 Rittenhouse Square and the W and Element Hotels, currently being built on Chestnut Street.

A record amount of housing was brought to the market last year between Girard Avenue and Tasker Street, according to a Center City District report. The organization calls the area “Greater Center City,” where 2,506 new units were completed, surpassing the 2013 high of 2,168 units.

“There has been a lot of discussion about whether it’s been too much. I don’t think it is,” said Ertz.

Over 5,000 housing units are on the way in Greater Center City, and 726 of those units are in large-scale projects in Center City West. That’s led some to speculate that there is too much building. The CCD report even asks, “Can the supply be absorbed?”

“I think it has serious momentum. Philadelphia has the second-largest downtown population,” said Ertz, referring to the Center City District report from 2015 that said the area was just behind Manhattan. “And that has, I think, hit such a critical mass that it’s going to keep on going.”

“I think that the prospects for Center City are really strong,” said Deborah Diamond, President of Campus Philly. “It’s always had a really good residential base and there is no reason to think that the growth is going to slow.”

Campus Philly is a nonprofit organization that encourages students to study and live in Philadelphia. Diamond said they also track Philadelphia’s college-educated demographic, which is contributing to the growing population of the city. 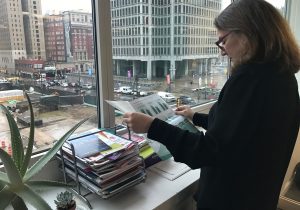 Campus Philly did a mapping study last year to figure out which neighborhoods saw the largest growth of 25- to 34-year-olds with college degrees. Diamond said the areas surrounding Center City saw greater than 15 percent increases in areas like Northern Liberties, Fishtown, East Kensington and Graduate Hospital. She also noted, though, that young people are in Center City.

“We know we see a significant mix of current students that live in Center City because of the easy access to the schools, along with maybe more professionally oriented recent college graduates – so they might be doctors and lawyers and be able to pay the slightly higher rents of Center City,” said Diamond.

But Pew Charitable Trusts, which cited the Census data in its 2014 report “Millennials in Philadelphia,” noted the Millennial generation is roughly twice as large as the generation before.

“It peaked in 2014, then fell off,” said Larry Eichel, project director of Pew’s Philadelphia Research Initiative.

There is more than just housing development underway in Center City West. A glass retail structure at 1428 Walnut St., which was completed in 2015, houses a large Verizon store and the Cheesecake Factory, The June 5th Memorial Park project at 2140 Market St. is set to commemorate the six people killed in the 2013 building collapse that destroyed the Salvation Army Thrift Store. A mixed-use building at 1911 Walnut St. is slated for 55,000 square feet of retail space along with 342 apartments and 64 to 75 condos.

The most notable change to the Philadelphia skyline is also a part of the uptick in building. The Comcast Innovation and Technology Center on Arch Street at 1,121 feet high will provide 1.33 million square feet of office space, 222 hotels rooms and 2,682 square feet of retail space. It will be the tallest building in Philadelphia, far above the hat of William Penn.

Two hotels are on the way, too, in Center City West, including the Cope Linder-designed W and Element Hotels. The site of the project, on Chestnut and 15th streets, has been through a tumultuous building process period of 17 years, an unusually long time for a project. 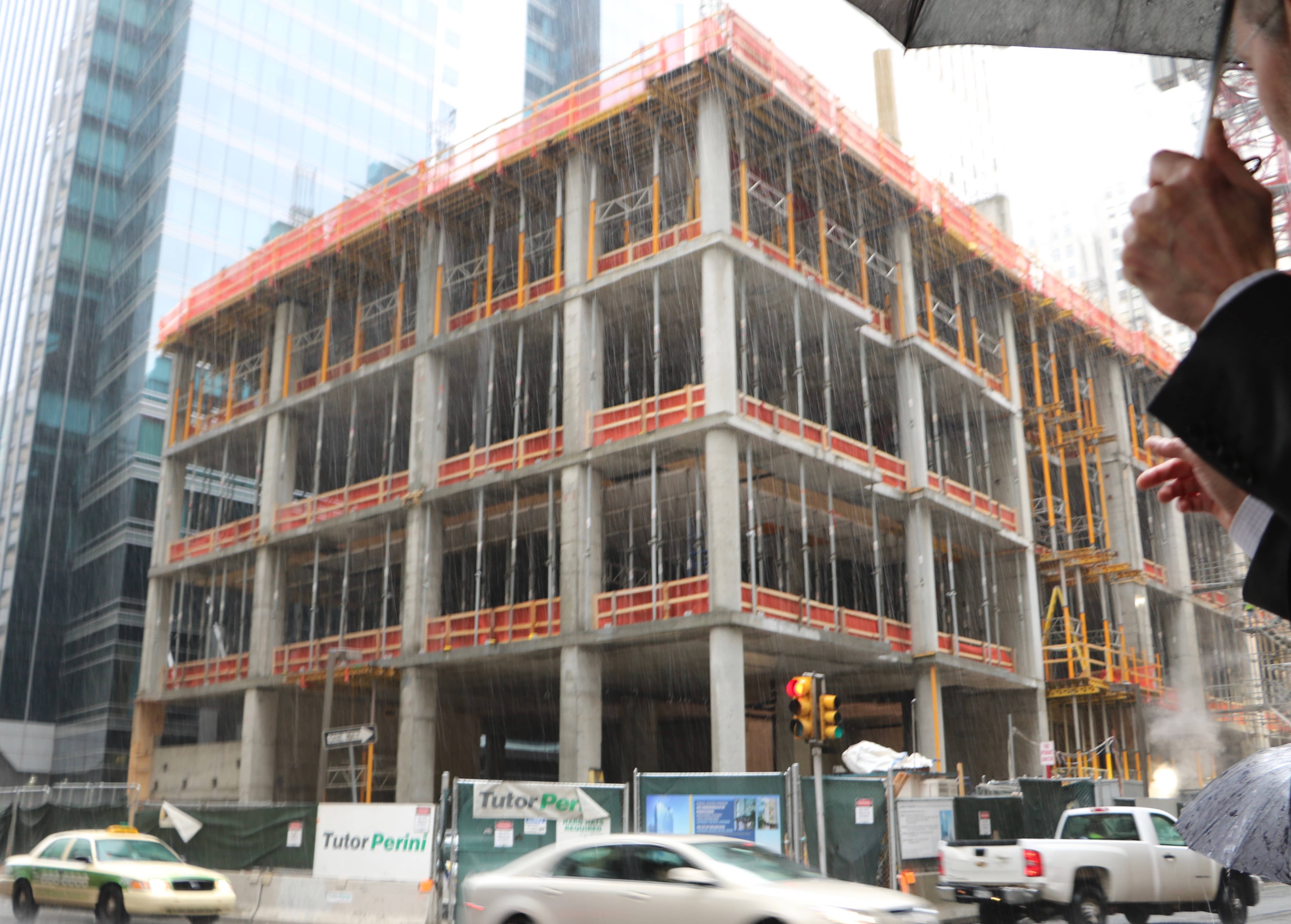 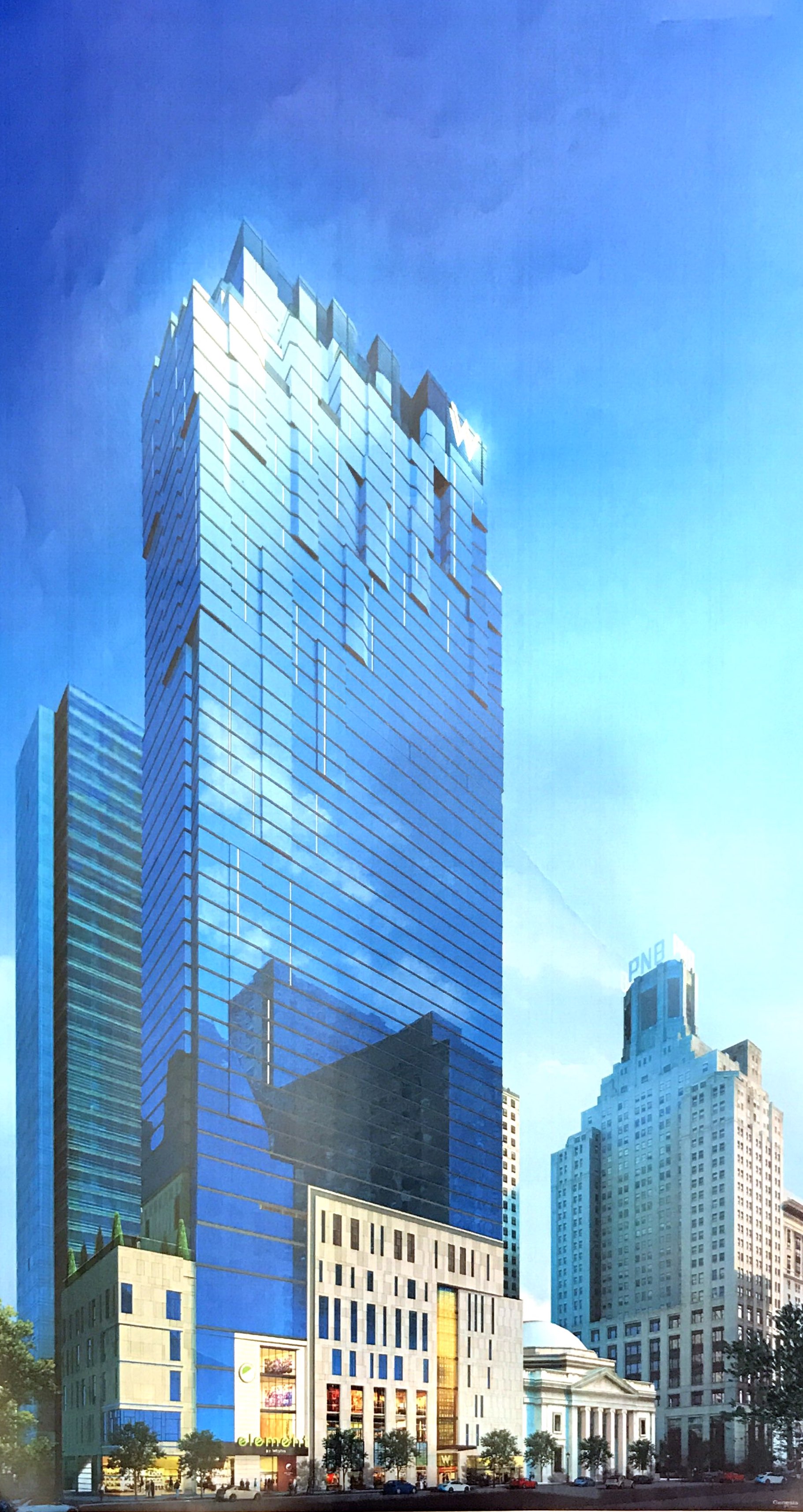 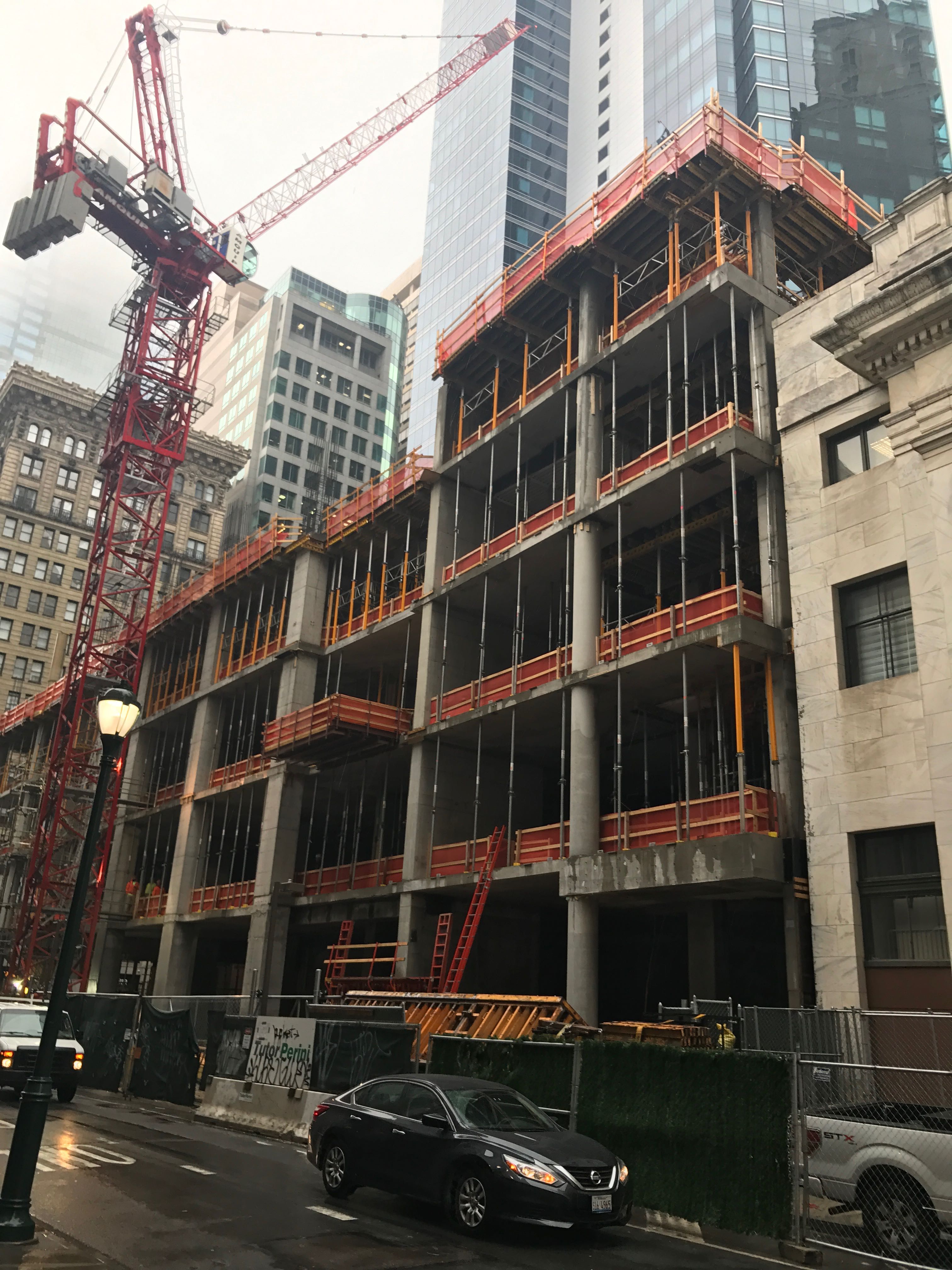 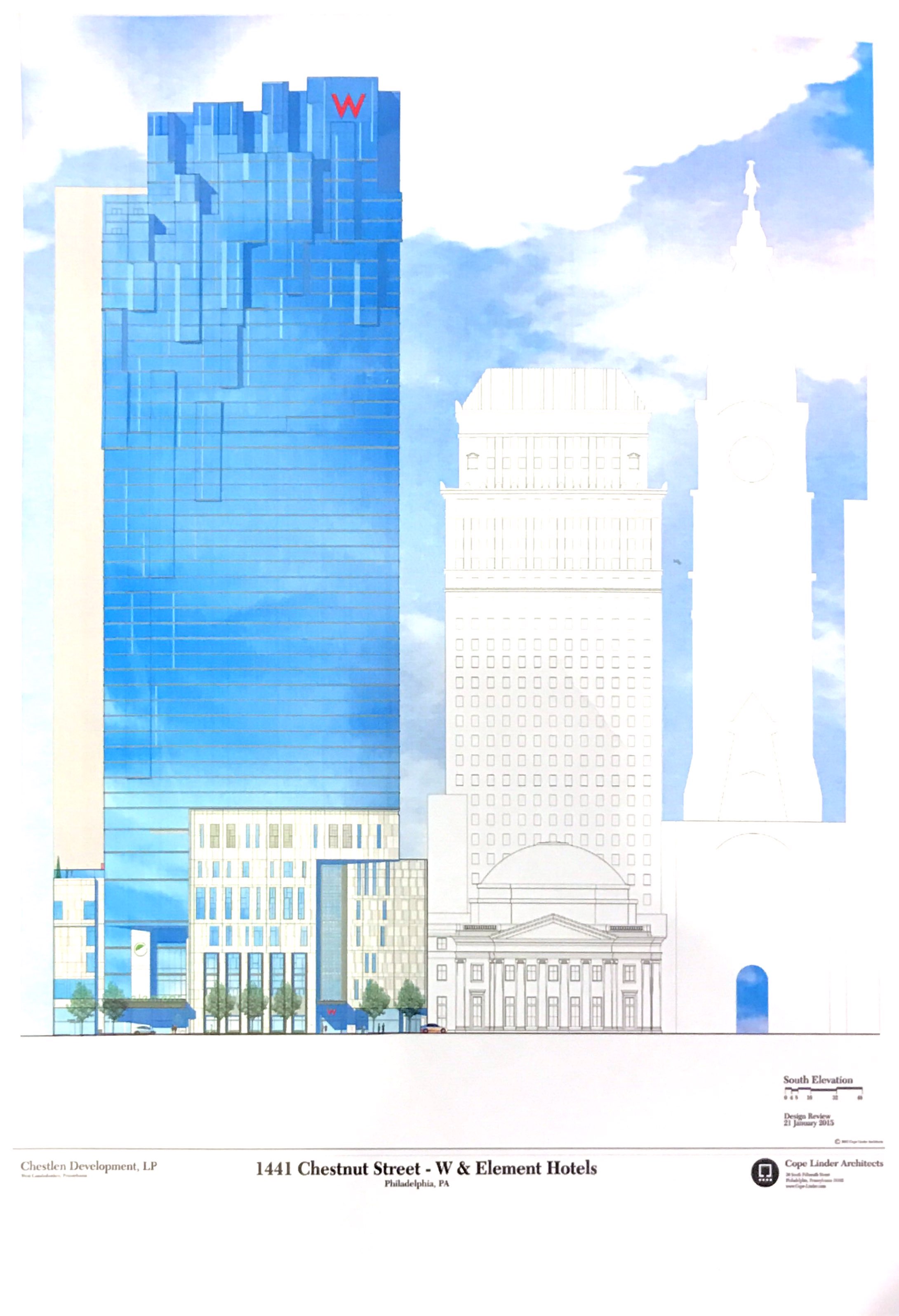 The building was intended to be all-condominium back in 2000, but it had a number of setbacks including going through litigation and weathering the recession. By 2012 it was settled on being all hotel rooms. The 51-story building will be an Element Hotel with 460 rooms in the middle floors and W Hotel on top with 295 rooms. It will feature an “eroding of the top [that] is like the cliffs going up Wissahickon Drive,” said Ertz.

The architect is optimistic about the future of the city, but he does say he is a little worried about it getting overpriced. Diamond doesn’t share that concern. 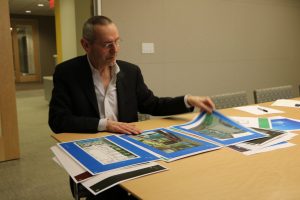 “We’re not going to be pricing out young people who are coming here from elsewhere, who are graduating from college,” said Diamond.

She sees Philadelphia as a unique place, different from other big cities like New York and San Francisco with high housing costs that make it seemingly impossible for those with a middle-income to live in those cities.

“I see a future for Philadelphia where regular working people with college degrees will be living and working in the city,” said Diamond. “And there is really not another big city in the country like that, or has that opportunity, and I think that is kind of an extraordinary thing for a future.”

Local artist Kevin Colden’s comic, Fishtown, chronicles the events of the 2003 murder of a 16-year-old boy, an act that shocked Philadelphia for the brutal nature of the murder and the lack of remorse by [Read More]

Sports Beat: Five of the Best Places to Catch a Game

Philadelphia’s vibrant bar scene may seem like too much too handle. So, we searched high and low for the five best sports bars in the city. Buffalo Billiards (118 Chestnut Street) Buffalo Billiards is located [Read More]