Edi was attending Temple University on a Fulbright scholarship when he found out about opportunities to be more of a part of Philadelphia’s African immigrant community.

“You had an increase of immigrants in Philadelphia and the needs of all those immigrants became obvious,” Edi said.

In late 2000, Leigh Swigart, then of Boston University, was commissioned to do a study on those African immigrants in Philadelphia. During her studies, Swigart commissioned an African advisory group to help guide her research.

Edi became part of the advisory group after attending a meeting in July of 2000. The advisory group meetings later developed into the formation of the Coalition of African Communities, or AFRICOM, which launched itself officially in May of 2001.

“The idea [was to] strengthen our relationships in order to come up with an umbrella organization that advocates for all of us and strengthen our voices,” Edi said.

Edi has been a part of AFRICOM in the years since its inception and today serves as its executive director and chief operating officer.

Today, AFRICOM serves as an umbrella organization for more than 40 member organizations serving 15 different nationalities from Africa to the Caribbean. 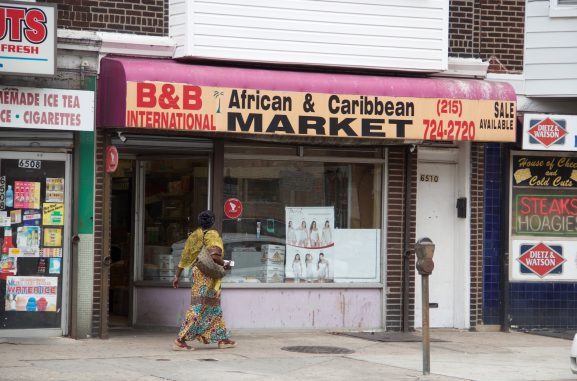 Andrew Batchelor, who is a leader of the Coalition for Jamaica, was looking for a credible organization to partner with in order to provide newly-arriving Jamaican immigrants with services to help them adapt to their new lives. He found AFRICOM in 2007.

“Ever since we found AFRICOM, they have been our number one partner,” Batchelor said. “They welcomed us with open arms. By teaming up with them, we didn’t have to re-invent the wheel.”

AFRICOM has also established connections with local business owners who have emigrated from African or Caribbean countries.

This includes Abdarhamane Diop, who operates African Small Pot in Kingsessing, just around the corner from AFRICOM’s new office. The 6500 block of Woodland Avenue, where African Small Pot is located, is full of African restaurants, markets and hair salons.

African Small Pot has been open for four years and serves dishes from a number of different African countries. The restaurant’s slogan says it all: they serve “original food from the motherland cuisine.” 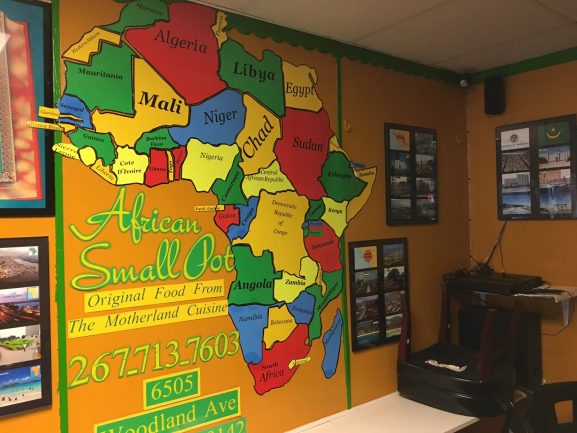 Immigrants such as Diop rely on AFRICOM for a variety of services.

Most of AFRICOM’s work is centered around immigration and providing immigrants with legal services as well as resources to access health care, education and employment.

“The African immigrants who are here are coming from countries where the public benefit and health care systems are different,” Edi said.

Each year, AFRICOM organizes a health fair where immigrants can learn about different health care services. Last year, the organization conducted a city-wide campaign to raise awareness about autism, a disorder which Edi said is an issue not spoken about openly in the community.

Health care has been a flagship of AFRICOM’s work since its inception, but they have expanded their services outside of health care to include helping families find ESL programs as well as helping teenagers get into college.

AFRICOM has developed a volunteer program through the University of Pennsylvania to help high school students with their applications and the college acceptance process.

The organization has also worked with the Penn Law Immigrants Rights Project (PLIRP), a student group at the University of Pennsylvania Law School which offers opportunities for law students to provide legal services to immigrants in the Philadelphia area.

Tu Le, a former director of PLIRP who assisted AFRICOM in counseling immigrants and doing research about immigration law, said that working with AFRICOM was among her most meaningful experiences during law school.

“Working with AFRICOM has provided me with the unique opportunity to get away from the books and apply the skills I’ve worked so hard to acquire,” Le said. “For me, these legal clinics introduce a human component to the law. I can’t tell you how refreshing it is to be able to talk to people and try to understand their problems during these clinics, and hopefully provide a path forward.”

In recent months, AFRICOM and its partner organizations have also worked to combat amplified anti-immigrant rhetoric around the country.

“The immigration atmosphere has tremendously changed,” Edi said. “There has been a sense of fear. The fear isn’t new, but it has increased with the current administration being very open and bold about what they want to do about immigrants.”

Within the African immigrant community, there is fear about the recently-expired temporary protected status granted to immigrants from Liberia, Sierra Leone and Guinea due to the Ebola health crisis. In September 2016, the Department of Homeland Security announced that health conditions had improved in those three countries, allowing immigrants to return in safety.

The temporary protected status that they were granted due to the health crisis expired in May 2017.

“This leaves quite a number of people in limbo. They don’t know what might happen,” Edi said.

There is also fear among the Jamaican immigrants of Philadelphia which is impacting many walks of life.

“Folks don’t come out to church as much because they think immigration [enforcers] could come to the church,” Batchelor said. “Other people go to work outside of Philadelphia to avoid being accidentally picked up.”

Despite this fear, Batchelor and the Jamaican community feel supported by organizations like AFRICOM.

Both Batchelor and Edi have realized that part of what makes AFRICOM so successful is the desire for immigrants to be among those who have shared experiences and backgrounds. AFRICOM often seeks out already-established ethnic communities to place newly-arrived immigrants.

“With the help of AFRICOM, the leaders and members of the community have signed up with PICC (Pennsylvania Immigration and Citizenship Coalition) to take immigration classes to learn more about what’s going on in the community and ease the fear of our constituents,” Batchelor said.

Although many of the benefactors of AFRICOM’s services are fearful for their futures in America in a turbulent climate for undocumented immigrants, AFRICOM’s network provides a crucial support system for immigrants to successfully start their lives in a new country.

Mantua: Shop Owner Gives A Part of Herself to the Community

Phyllis Jones-Carter provides the magic behind the thriving consignment shop located on the 3800 block of Lancaster Avenue. Jones-Carter actively supports the neighborhood and works to strengthen the community in hopes of helping it thrive [Read More]

As the daughter of immigrants, Councilwoman Helen Gym has dedicated much of her time in public service as an at-large member of Philadelphia City Council to advocating for the city’s immigrant and refugee communities. Gym [Read More]