On most summer Wednesday evenings, in the upper part of Mayfair, residents can hear faint sounds coming from the woods. Not the sounds of nature but rather some of the most iconic music songs ever performed. Billy Joel, The Rolling Stones, Led Zeppelin, Van Halen, John Mellencamp and Pink Floyd are just some of the Rock & Roll Hall of Fame inductees whose songs cut through the trees and humid air for a couple of hours.

“We do tribute bands, not covers,” said Steve Hartzell, vice president of the Pennypack Park Music Festival and the announcer for the shows. “We’re very particular about that. Well, except for Mike LeCompt. But he’s a local guy.”

The show has been going on for decades, started by Ed Kelly. He passed away five years ago but now the volunteers he recruited keep it going in his honor.

“If they paid me to do this, I’d probably quit,” said Hartzell, who guessed he’d been doing the show for around 14 years.

More than just good music, the festival serves a good cause. 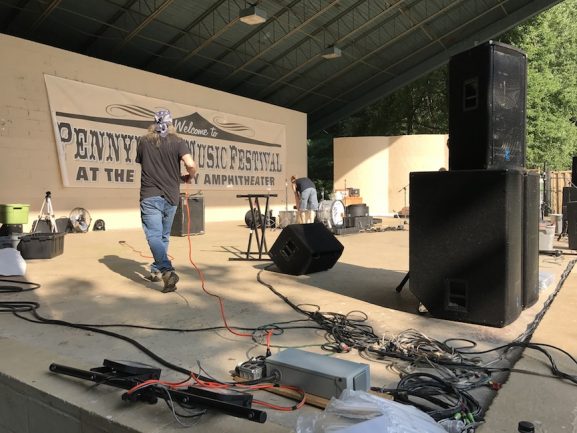 Hartzell estimated the show costs about $2,000 before even paying the band, so volunteers ask for donations and organize raffles with prizes from sponsors. However, not everyone can give and that doesn’t matter.

“Every now and then, someone says, ‘If you didn’t have this I would have nothing to do with my family in the summer,’” he said. “That’s the best compliment [we can get].”

They also receive other donations for the show, ranging from lawn care equipment to storage boxes to keep supplies and tables safe and dry. 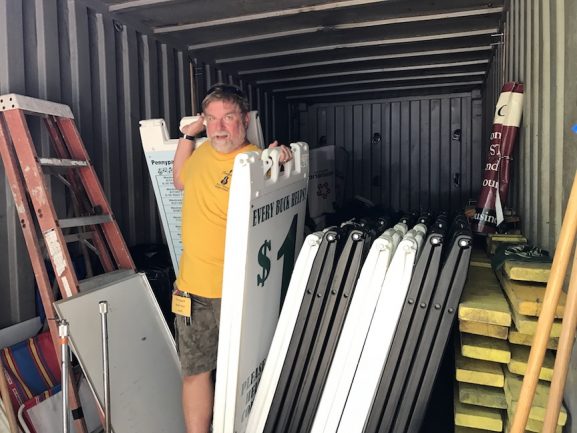 Sponsors of all different levels make up the difference.

Other volunteers who brave the elements each week to set up sponsor’s signs, tables and barricades. But one man gets a special nod.

“We probably wouldn’t have the show without Norm,” Hartzell said.

Norm Jadczak is the president of the Pennypack Park Music Festival. And more importantly, the sound board technician.

Jadczak shrugged off the praise and continued to run wires for speakers and lights in the 95 degree heat. He received help eventually. A student intern from the Art Institute of Philadelphia joins him for each show. Jadczak (pictured below, right) teaches that student, Eric Gatling (pictured below, left), how to run the board during the show. 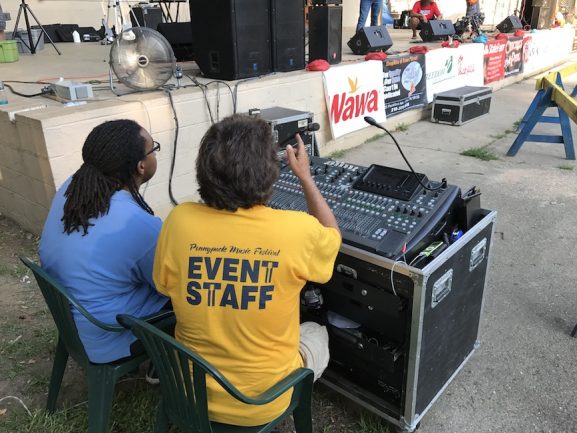 Gatling, who would like to work on professional concerts someday, noted the Pennypack Festival provides a great experience and also counts as an internship.

The organizers make it a point to connect outside organizations.

“It’s another part of fulfilling our mission statement which is to assist with musical education,” said Donny Smith, who is president of the Mayfair Civic Association but also pitches in on the music festival too. “The T-shirts that we sell are designed by students from the Art Institute [as well].”

Participating organizations contribute in all sorts of ways.

“We also work with the Philadelphia Police Explorer program by using their cadets to assist with national anthem, crowd control and various other duties,” Smith said.

Cpl. Bryan Coyle of the Philadelphia Police Department oversees the explorer cadets, who range in age from 14 to 20, while they’re at Pennypack. 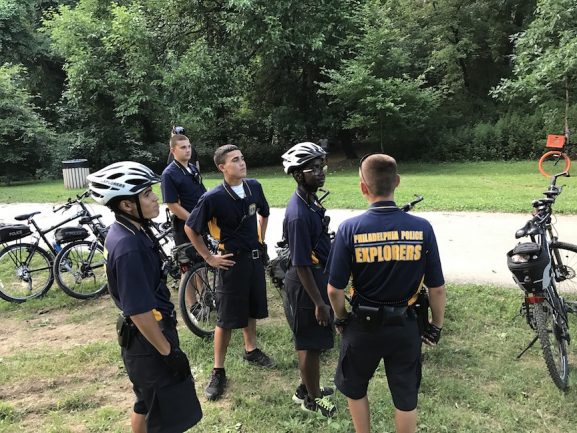 “They’re learning a lot here,” Coyle explained. “Controlling the bikes … balance and control through the crowd, communication skills, understanding how to deal with someone who’s disorderly.”

A cadet alerted him to two ATV riders nearby. While Coyle radioed that information in, another cadet stood by while a concert-goer explained he’d found a suspicious package. Coyle assessed the package, a white tarp with red stains and a rope tied around it. After determining it was not a body and the stains were just rust, he disposed of the tarp. But he brought the rope over to the festival volunteers.

Cadet Nelson Hernandez noted the concert time counts toward the required community service hours. The cadets need 300 of those hours in addition to 700 hours training over a few years.

The teenage cadets make up the lower end of the age scale of volunteers, but nearly all decades of ages are represented. Gracie Bucher, aka Amazing Grace, will turn 89 in August. Bucher’s specialty is selling tickets for the raffle drawing.

As the band plays, a reveler noticed something wrong one of the speakers. He told Jadczak about the issue. He and Gatling made some adjustments on the fly and the band didn’t miss a beat.

With Jadczak on top of the sound, Smith stood on stage and looked out at the crowd. 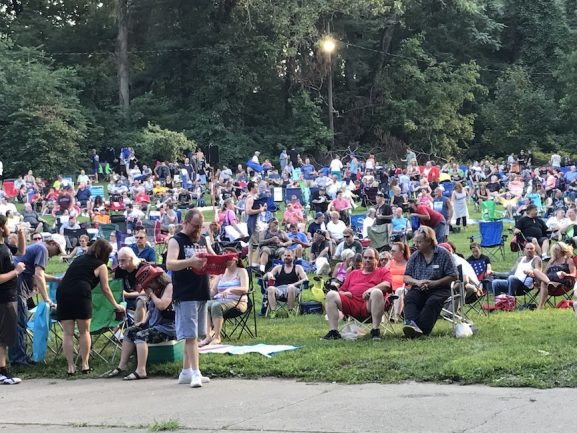 “We rarely have any problems here,” Smith said. “Occasionally someone gets rowdy. We usually just talk to them.”

But soon enough something drew Smith offstage toward the band’s parking area where a park ranger and the Explorer’s were tending to something.

“A raccoon had his paw shoved through the can, through the mouth hole,” Smith explained. “I was able to get it and cut the can off. I couldn’t get it to the part where the mouth part was … without him trying to nip me.”

The Explorers stood by for the assist, some more sheepish than others.

“I wasn’t going near that thing,” Hernandez admitted.

Coyle and the park ranger got the animal into a box to transport it to a facility in Roxborough. Coyle secured the box with rope given to him by a festival volunteer. Coyle gave a long look at the rope.

“Yep, that’s the same rope from the suspicious package that I gave them,” he said with a smile.

The shows must end at 9:30 p.m. for noise reasons. This thwarts the traditional encore most bands give, but no one wants to upset the neighbors.

For locals Dan and Annie Tansey the concerts mean more than good music.

“I used to bring my daughter here [as a child],” Annie Tansey said. “I could hear the music in my backyard anyway. So why not come down?”

“This is our very own Central Park,” he added.

Black Dog’s lead singer, Rob Malave, said the Pennypack show is a highlight of the year. 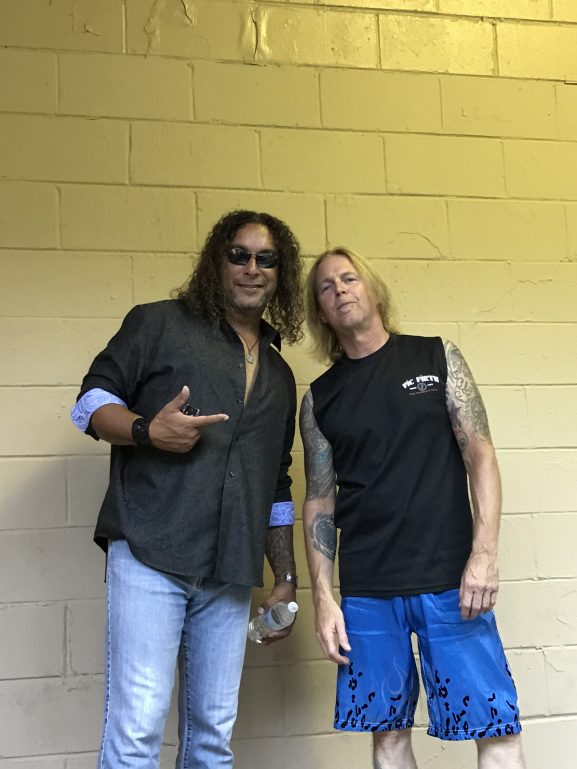 Black Dog faced a problem of that weekend when their drummer’s mother-in-law died. The band found Steve Werner, better known in music circles as Budgie (pictured above, right), to fill in.

“He locked in beautiful,” Malave said. “I mean playing Zeppelin is tough enough, but subbing, and doing John Bonham with guys you’ve never played with before … it went off without a hitch.”

As the band set off for home, the volunteers continued to break down speakers and barricades. Several set off to where the crowd was to clean up trash. Jadczak found two wires that needed servicing. 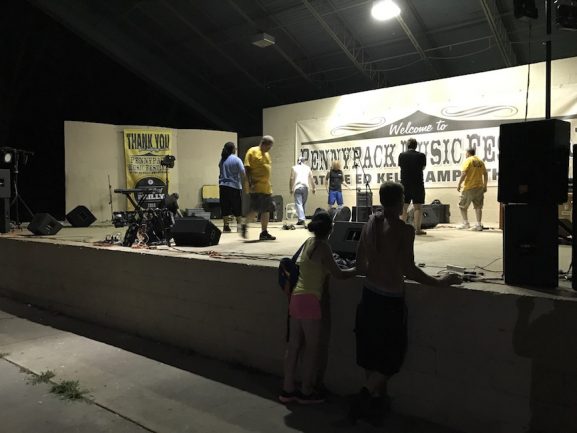 When they’re done they get a treat from a sponsor. The owner of the local Chick-fil-A sent chicken tenders, fries and cookies for the crew. With all of the signs put away, the portable toilets locked up and the tents and table broken down, the crew reminisced. They talked about shows, Ed Kelly, the heat, new and old sponsors and just about anything else.

One by one they filter out, explaining how early they have to get up in the morning, promising to be careful getting home, but most importantly adding a promise to see each other again next week.

Donnie Smith shuffles his papers atop a folding table in the white cinderblock-walled multipurpose room at the Mayfair Community Center. The clock reads just after 7 o’clock. The room is about half-full of chattering residents [Read More]

Looking to find out what’s going on in Mayfair this week? Our calendar round-up lets you know what’s happening in your neighborhood. BenePhilly Mobile Office– July 18-20, 10 a.m. – 2 p.m.:  Find out about [Read More]