The recent surge in value of Bitcoin led many people to look it up on the internet.

According to Google Trends, the search-term “bitcoin” was one of the most-searched terms in the third week of August 2017. Just a year earlier it only had 12 percent as many searches as the most searched term in the same time period.

For those familiar with the word but uncertain of its meaning, Bitcoin is one form of cryptocurrency. Instead of having a central bank control the creation and transfer of money, cryptocurrencies use technology to marry currency with cryptography to electronically generate digital funds and verify the transfer of the funds, independent of any banking system.

Some folks in the business try to keep it simple though. Luke Demi, a software engineer at Coinbase, a company that serves as an exchange for cryptocurrencies, likens Bitcoin to a more well known form of value.

“When you buy into Bitcoin you are essentially buying like a hunk of gold,” Demi explained. “You’re buying a finite amount of an asset class.”

Cryptocurrency could be thought of as commodity, but one that also has potential purchasing power.

Bitcoin ATMs are popping up at places such as Liberties Parcel in Northern Liberties and several local businesses have taken notice and now accept Bitcoin as payment for products and services. Business isn’t booming just yet though.

“To date we have had three clients that have wished to pay with Bitcoin,” said Darryl Brown, owner of Helping Hands Movers, via email.

Philadelphia Scooter also accepts Bitcoin, but have had only two purchases with it –by the same person on two separate occasions. 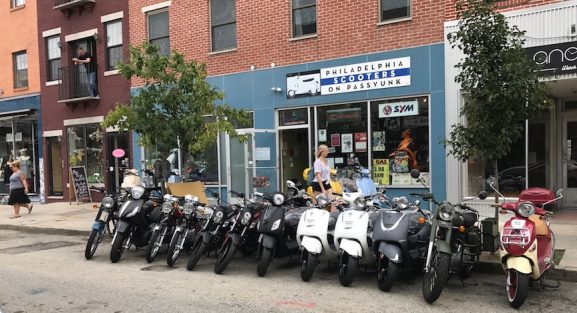 Brown has had similar experience as far as frequency.

“[We’ve had] two within the last month, another a year and a half ago,” he said of Bitcoin payers.

The ground floor of Bitcoin investment is long gone. The 2010 purchase of two Dominos pizzas with Bitcoin has been immortalized. If someone had purchased $100 of Bitcoin on Jan. 1, 2011, when the price was about 30 cents, they would have more than $1.6 million in September of 2017.

But backers of cryptocurrency believe it still has plenty of potential to rise in value. The founder of Snapchat said Bitcoin could hit $500,000 by 2030. If true, $100 today would equal more than $102,000. Part of the reason for the uptick in interest is the draw of a potential new way to make money.

But another reason is the mystery surrounding what Bitcoin is. Getting deeper into cryptocurrency reveals concepts like blockchains, mining and mnemonic recovery phrases. Even folks into Bitcoin and other cryptocurrencies have a difficult time explaining the idea to the uninitiated. Particularly if the uninitiated are not tech-savvy.

“It’s a little complicated,” admitted Luke Demi, a software engineer at Coinbase, a company that serves as an exchange for cryptocurrencies. “[But] if you trust the laws of math, and therefore the laws of cryptography, it is very simple to see that this is cryptographically sound.”

There are several ways to buy cryptocurrency. The simplest way is to go to an exchange like Coinbase and sign up. After linking a bank account or credit card, Bitcoin or other forms of cryptocurrency can be purchased, usually for a small fee.

Another way to acquire them is to download a “wallet” to a computer or smartphone. Companies such as Copay, Airbitz and Mycelium all offer different options to buy, sell or store cryptocurrency. The choice depends on an investor’s goals, concerns and the operating systems on their phone and computer.

Given cryptocurrency’s complexities, one way to learn more about buying them is to talk with people. Local groups like Bitcoin Philadelphia has regular meet-ups.

Sam Weinrott, owner of Pirate Printing, accepts Bitcoin said talking to other locals using cryptocurrency is the way to go.

“That’s probably the best way to learn,” said Weinrott, who makes and sells T-shirts, including a Bitcoin one.

He recommends starting small at first and not putting money into cryptocurrency that can’t afford to be lost.

“I think that crypto as an investment is risky, especially currently,” Brown said, though he is looking forward to the future. “Like Uber, decentralized technology allows folks myriad options and allows the human community to grow organically and freely.”