For many, owning a first home is a big part of the American Dream.

In Philadelphia, that dream is less of a reality than other cities in the country. According to public data sources gathered by Data USA, only 52.6 percent of homes in Philadelphia were occupied by their owner in 2015, more than 10 percent less than the national average of 63 percent.

The New Kensington Community Development Corporation (NKCDC) is looking to help that through its First Time Homebuyer Workshops, sponsored by the Pennsylvania Housing Finance Agency. These free workshops are designed to effectively educate first time buyers. Topics include the steps to purchasing a first home, resources available and the potential dangers of a large investment.

Joe Filipski, who coordinates the program for the NKCDC and been with the organization since 2008, has worked in housing counseling since 1994. He believes in the benefits of the workshops.

The workshops aim to provide not only valuable information regarding financing and maintaining that first home, but guest speakers are brought in to answer any questions that the attendees may have. In addition to the free workshops, the NKCDC also offers paid online workshops that can be used to qualify for Project Reinvest downpayment assistance loans and one on one counseling services.

Darrell Hendricks and his wife bought their first home at the beginning of this summer near Temple University’s campus, culminating in a home dedication on June 24.

“To be able to have a home of my own that I can have my family in that’s quality-built, great pricing, it’s affordable for us, it just brings a certain comfort, security, pride,” said Hendricks. “Just a place I can call home, my own.”

After going through some difficult renting experiences, Hendricks decided it was finally time to own his own place.

Hendricks went through the online workshop and received a grant through Project Reinvest while receiving assistance from Habitat for Humanity to help finance their future home.

He also met with housing counselors in NKCDC face-to-face through its one-on-one appointments.

“In the whole process I would say the most helpful was the one-on-one with the counselor,” Hendricks said. “I think just being able to go to the actual office down in Kensington and Frankford Ave. and just being able to sit with someone and have them answer questions and ask questions. I actually liked that a lot and my wife too also.” 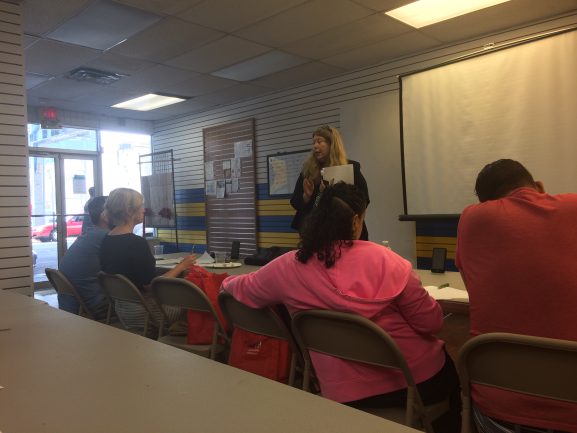 The workshops often serve as a gateway to other services available to first time home buyers.

“I think they’re absolutely amazing,” said Janet Krauss, a guest speaker and realtor with Realty Mark Associates who has worked with the NKCDC for 10 years. “Anytime you’re a first home buyer, I think they should all go through one of these workshops.”

The speakers provide not only valuable experience and information for the attendees, but also excitement.

“A lot of speakers come with a lot of passion,” Filipski said.

The workshops are geared toward those looking to buy their first home, providing potential buyers with information they need, even if they are still in the beginning stages of the process, like Maura Adams.

“I learned a lot of information here that I didn’t know before,” said Adams, a first time buyer. “Now I know where to start.”

For many of those looking to purchase their first house, it is the financial information that is so vitally important.

“I know what grants are available,” Adams said. “I feel confident that I’ll be able to start by the deadline that I gave myself.”

Sorting out the financing possibilities and options can be daunting.

“I know the grant programs are big, and lenders,” Krauss said. “They come in with the idea that all lenders are the same, it’s the same across the board and it isn’t.”

Krauss believes these workshops, although geared to first time homebuyers, provide great information even for those who already own.

“I don’t care if you have good credit or you think you know what you’re doing because there’s so much information in these,” Krauss said. “I think it helps you to become a better consumer. Even people who have bought houses don’t know half this stuff.”

Beyond the financials, buying a house can be a big step in a person’s life from an emotional standpoint as well, something the NKCDC understands and addresses. 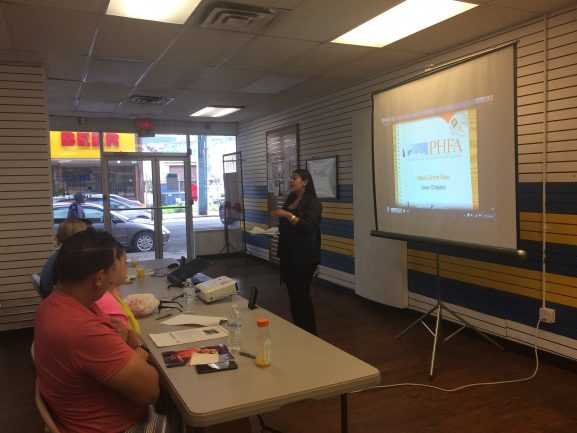 One lesson taught during the workshops is gaining awareness of who, and how, to deal with in the home buying process.

“This is just the first step in a long journey,” Filipski said. “It’s very helpful and very important because there are individuals who can take advantage of individuals and we want to avoid them. So they’re well armed and well educated, informed, so they can make the proper decisions so they don’t find trouble when they finally get that house.”

“I’ve been renting since I can remember, since I was 18,” Hendricks said. “Just house to house and apartment to apartment.”

He may have purchased a house, but he will make it his family’s home.

“[This is] a place that I can just let family come and just have a good time with meet ups and get togethers,” he said. “It’s awesome man, it’s kind of what I always wished and hoped for. To see my family just enjoy it, it means the world to me.”

Hendricks saw NKCDC as an important community resource overall, hoping others can find the same help that his family received.

“They’re doing some great work down there,” he said.

-Text and images by Jared Phillips.

Many neighborhoods in Philadelphia are considered underprivileged “food deserts,” low-income areas that lack regular access to grocery stores and fresh markets. They battle with consequences such as early childhood obesity and an overall decline in [continue reading…]

Kensington: A Block of Love Along Kensington Avenue

https://vimeo.com/69314980] Tucked in the center of a community that has been battling drugs and violence for generations shines a block filled with hope and love. As of March 23 of this year, the Kensington section [continue reading…]