Donnie Smith shuffles his papers atop a folding table in the white cinderblock-walled multipurpose room at the Mayfair Community Center.

The clock reads just after 7 o’clock. The room is about half-full of chattering residents whose volume begins to fade as Smith strokes his beard and leans back in his chair. 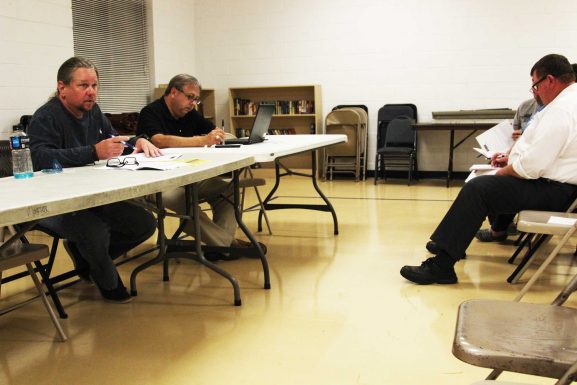 It is the Mayfair Civic Association’s monthly meeting. Smith, 51, serves as the president of the Association. He has called Mayfair home for his whole life, even though he was technically raised in Tacony.

“I always thought that was Mayfair growing up. It wasn’t until I started coming to these meetings that I realized the boundaries didn’t go over the other side of Frankford Avenue,” Smith said. Although technically he was born-and-raised a Taconian, Mayfair is where his heart is.

“You know, it’s cool. It’s a community neighborhood. You’ve got all different kinds of homes and businesses,” Smith said, smiling. “You got row homes, you got singles, you got twins. The avenue is taking off and we got businesses off the Avenue doing well too.”

His job as Civic Association president is quite time-consuming and often thankless. Smith talked about his career in neighborhood politics and what keeps him coming back. 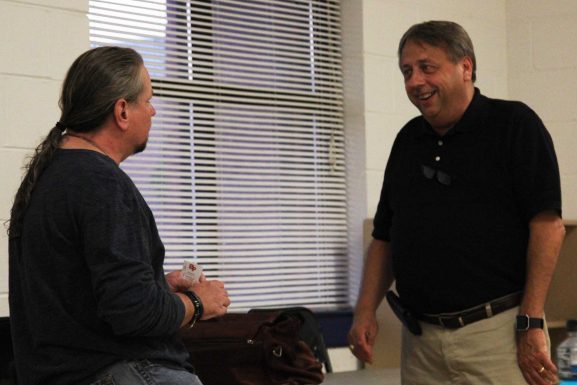 What are your ties to Mayfair?

I have been here my whole life. Well, yeah, my whole life. I got involved in the Civic [Association]. You know, I was just the guy sitting in the back of the room. And Joe the president needed some people to fill the board, so he asked me and I came along as the sergeant-at-arms and went from there right to president.

What do you think sets Mayfair apart from other neighborhoods in Philadelphia?

It has got a pretty tight community. Everyone is pretty involved in it and they want to see it improve for the better. There are people who are involved in the library, in the parade, in the music festival. Ya know, everybody is involved in doing something to make the neighborhood better than it was. There was a time where things kinda got a little distant. People were allowed to sit on their pockets for a while, so to speak.

What do you personally get out of all of this civic involvement? It seems like a lot of work for little return or recognition.

Would you describe it like that–as up-and-coming and doing well, thriving?

I think it’s on its way, yeah, for sure. We have a business approved district now that we didn’t have a few years ago. Which has been focusing all of its attention on the Avenue. We used to have a CDC [Community Development Corporation], which we still have, that had to cover all of its attention on everything like businesses off of the avenue, residential properties and different playgrounds. Promoting businesses on Frankford Avenue, trying to create events, and make things happen on the avenue. 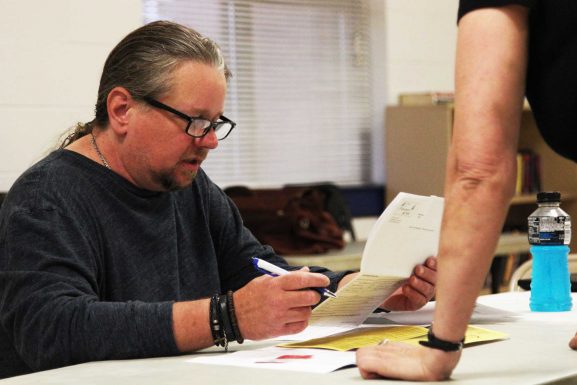 What would you say is the Civic Association’s role in the community? And what’s your role in all of it?

We are, for the most part, the voice of the community. We hold our meetings. The community comes. They can hear about anything–the good, the bad, the ugly. This is the town hall. Sometimes it gets pretty unruly and crazy, other times it’s awesome. It is all the zoning that goes on in Mayfair residential and commercial. We are where all the applications come to and the community has to vote on it.

What is it like for you to see the community come together, whether at a community event or here at these meetings?

I like to put them [events] all together and hopefully find someone to hand it off to so I can go into something else. That’s the hard part. It is hard and easy at the same time. It’s fun to build it, but to continue to have to maintain it––that’s work. So it’s on to the next thing for me.

– Images and text by Rob DiRienzo and Jenna Faccenda.

Joe DeFelice is a true Mayfair man. Living in the city his entire life, DeFelice moved back to the neighborhood after graduating from La Salle University and began his role as a community leader. Even [Read More]

Mayfair: Abandoned Home And Disputed Back Lot Give Neighbors Headaches

On the 3400 block of Ryan Avenue in Mayfair, residents are becoming increasingly concerned with the quality of their community. One boarded up home is bringing down morale and a disputed plot of land behind [Read More]

Pop-ups throughout Philadelphia have been gaining popularity. These small, usually short markets come for all sorts of reasons: a beer garden in the summer, to promote a corporate brand or, in the case of Mayfair, [Read More]