Pop-ups throughout Philadelphia have been gaining popularity. These small, usually short markets come for all sorts of reasons: a beer garden in the summer, to promote a corporate brand or, in the case of Mayfair, to bring a sense of unity to the neighborhood.

In 2015, Uwishunu, a tourist destination website, reported more than 20 pop-ups in Philadelphia in just the holiday season. Changing over time, pop-ups have ranged from political rallying points, to marketplaces and movie theaters to today when the pop-ups host live entertainment and food for people to visit.

In a 2012 article, D. Grahame Shane, an urban design scholar, attributed the rise of pop-ups to forward thinking in city design, where walking and bicycling are better options than driving or commuting.

2016 is the first year Luka Lakuriqi has been in charge of the Mayfair Community Development Corporation, the local CDC. The first objective he was tasked with was creating a pop-up event in about a week’s time. Lakuriqi has since organized a number of summertime night markets and a Christmas village for the neighborhood. 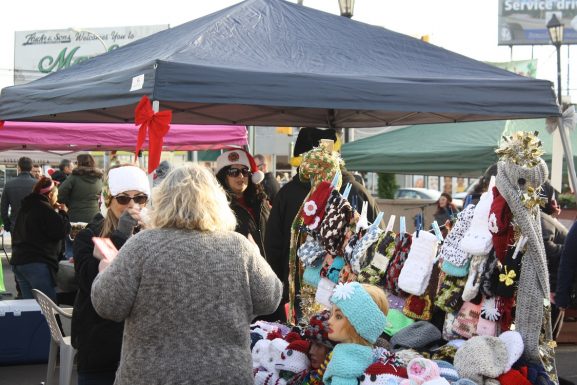 “I cannot downplay the work of the volunteers and the board members,” Lakuriqi explained, the day after the final community pop-up for the winter season. The CDC might be one of the most prominent of the involved organizations, but they all come together to create a vibrant pop-up community.

For Mayfair community organizations and business owners, the creation and sustainability of the pop-ups on the block of Ryan Avenue between Frankford Avenue and Leon Street offer a way to connect to their neighbors in a way they haven’t been able to without the pop-ups.

Although the temperature dropped steadily through the evening of the Christmas Village, warm feelings pervaded as local musicians sang popular songs along with classic holiday tunes, and neighbors reveled in good times over a beer from the local Grey Lodge. An event as intricate as a night market or a Christmas village doesn’t just come together on its own.

Pulling together any pop-up event takes money, time and resources. Insurance and permitting costs can go into the thousands for an event shutting down an entire block according to Siegel. Local businesses help out, such as the Republic Bank which offers a grant to the organizing agencies.

Other costs include decorations, furniture such as tables and chairs and even the music played. Where they can help it, the CDC will recycle old decorations and furniture. For Lakuriqi and the CDC, which primarily funds the pop-ups, the cost is absolutely worth the benefit the neighborhood receives from each pop-up. 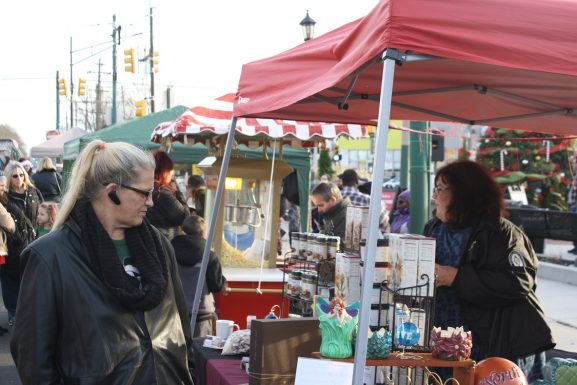 “That’s what the community is all about: Coming out and getting together,” Lakuriqi explained. Having about 12 of the events a year, averaging one every month is bound to run up the bill though. Any money made goes right into the CDC’s budget for future events or other expenditures Siegel said.

“We’re sort of trying to double down to really make it a destination for people,” said Sam Siegel, executive director of the Mayfair Improvement District, the local BID. In that, the pop-ups have been successful.

Mayfair as a destination is a primary goal for Donny Smith, president of the Mayfair Civic Association. For him, one of the main reasons Mayfair continues to hold successful pop-ups is organizers being mindful of what exactly the locals want.

“It’s because of this attention to detail that residents of and visitors to Mayfair continue to come to these events time and time again, and are spreading the word that Mayfair is a happening place to be,” Smith said.

Not including repeated events, such as the multiple editions of the Night Markets, organizations in Mayfair hosted 11 events throughout 2016 according to Smith.

According to Lakuriqi and Siegel, the pop-ups have largely had the same vendors throughout the pop-up season. To them, returning vendors is the sign of success.

But a thriving event isn’t the only thing Lakuriqi and his cohorts want out of the pop-ups though.

“The main idea is to get people out of their homes and interacting instead of sitting on the couch watching television all day,” Lakuriqi said. When Lakuriqi began the pop-ups at the beginning of his tenure, they worked like a drive up market where people searched for parking, looked over the vendors’ wares and left.

The early pop-ups were a monetary success, but the organizers yearned for more. By the end of the first season, established tables in front of live music played host to jovial residents sipping craft beers and talking about the upcoming holidays.

“This is something that sticks with me and something that I am very proud of,” Lakuriqi said in reference of the transformation from marketplace to social gathering spot.

For Lakuriqi, success isn’t determined by the amount of money the community organizations make but by how long residents stick around and enjoy their neighbor’s company.

“The goal, most generally,” Siegel said in echo of Lakuriqi, “is to bring the community into the public space.”

-Text, images and video by Erich Martin and Dan O’Neill

Along the historic Frankford Avenue sits a furniture store that directly deals with pieces that are both historic and contemporary. Although many faces are new to Fishtown, Michael Tonuci and his son Steven have been [continue reading…]

Lisa Greco (above) has lived in Northeast Philadelphia her whole life. And for 16 years, she has been a Mayfair business owner. Greco owns Bella Lisa Hair Studio on Cottman Avenue, near Frankford Avenue. She [continue reading…]

Joe DeFelice has a mission. The chairman of the Mayfair Community Development Corporation is using a weekly farmers’ market in the heart of Mayfair to kickstart that mission. The market will be running every Sunday [continue reading…]