For Joe Wise to buy fresh fruits and vegetables, he has to walk nearly a mile away to the Fresh Grocer of Progress Plaza on Broad Street near Oxford.

Wise, who lives at 21st and Jefferson streets, often gets food from Wendy’s or Burger King. He calls himself a “fast-food junkie.”

But in the next few years, that may change. As part of the organization’s Neighborhood Transformation Project in Sharswood, the Philadelphia Housing Authority (PHA) plans to build an 18,500 square-foot grocery to help create a business corridor in the neighborhood as well as alleviate inaccessibility to fresh food.

“It’s good to eat healthy and everything and watch my weight and blood pressure and everything, but I’m just happy for the neighborhood,” Wise said of the building of a grocery store in Sharswood.

Kelvin Jeremiah, the president and CEO of PHA, said that one of the things that became clear early on in the transformation project was the need for a grocery store.

According to a 2009 study by the United States Department of Agriculture, 23.5 million people lack access to a supermarket within a mile of their home.

The overwhelming lack of supermarkets and the overreliance of corner stores in urban areas has impacted the health of the people in low-income communities, according to the Food Trust, a nonprofit that makes affordable, healthy food more accessible in the U.S. This lack of supermarkets is accompanied by a lack of fresh produce available in the city.

As part of the transformation project, PHA engaged in discussions with a number of grocery stores, and ultimately decided on Save-A-Lot as an affordable option for the community. 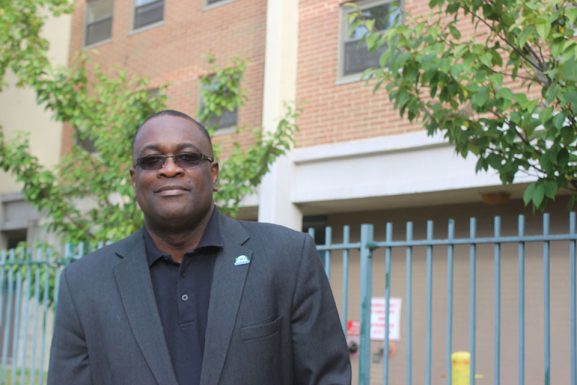 Jeremiah said that healthy food options were one of the most vocal areas raised in PHA’s engagement with the community. Sharswood residents said they wanted access to fresh meats, fresh fruits and vegetables and the same variety of products that can be found elsewhere in the city.

The terms and design around the grocery store development with Save-A-Lot are currently being finalized. As of yet, there is not a planned groundbreaking date.

Jeremiah said that in the beginning of the transformation project when they were taking recommendations from Sharswood residents, it became clear that many people in the community felt that the neighborhood was a food desert.

A food desert is an area, often in a city, where there is poor access to healthy foods. In some parts of Sharswood, people may have to walk up to 20 minutes to the closest grocery store.

“Of the families that live and lived here, they didn’t have sufficient options,” he said. “We wanted to give them an opportunity to shop where they live,” Jeremiah said. 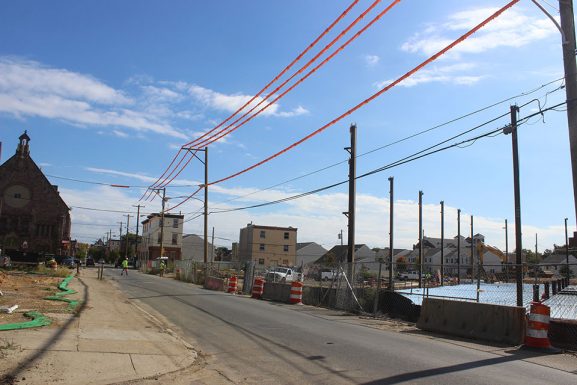 Kamaryn Norris, the project coordinator of the National Campaign for Healthy Food Access at the Food Trust, said that oftentimes in communities, corner stores can be the only shop people can access for blocks.

“When you walk past all of these corner stores with unhealthy foods displayed right in the front with Cheetos and sugary fruit drinks to start your day … your child isn’t going to be able to do as well as the kid who is getting nutritious food to feed their body and their brain,” Norris said.

“It’s about having access and having the opportunity to do that,” Norris said. “Why do you get to have a grocery store in your neighborhood, but we don’t? We aren’t experiencing the same thing. I think it’s really about providing that basic human right for people to thrive in life.”

Jeremiah added that he hopes the new grocery store will enable families to get the fresh fruit and vegetables they need through a shop closer to their home. He also hopes it will stabilize and create a commercial corridor for the neighborhood.

There are no community food initiatives by PHA currently, but many churches in the area have food pantries.

The population in Sharswood has dwindled since the demolition of two high-rise public housing towers in 2016 as part of the transformation project, but Jeremiah said he’s hopeful the population will rise once the project is finished and with a place for people to do their food shopping in the neighborhood.

“The families that we serve are not unlike any other family,” Jeremiah said. “They want to live in a community with the same amenities you would expect in Center City or Chestnut Hill or the far Northeast.

-Text, images and video by Emily Scott and Michaela Winberg.

Warren McMichael and Talmadge Belo of Sharswood say they have seen it all in terms of construction and development in their neighborhood. The lifelong residents retired from their careers in education and manufacturing, respectively, to bring [Read More]

During the Brewerytown-Sharswood Community Civic Association’s (BSCCA) meeting on Thursday, Sept. 20, tensions arose around residents’ concerns about the lack of public transportation, as well as a perceived garbage problem. “This area is a transportation desert,” [Read More]

The neighborhoods of North Philadelphia are home to a number of historical landmarks. Reminders of the area’s 17th- and 18th-century history are scattered across the changing neighborhoods of Francisville, Sharswood, Spring Garden and North Central. [Read More]