Nolita goes by the artistic name Dj “Dame Luz” – which translates to “give me light” a phrase in Dominican slang that can mean anything from “what’s up” to a sense of encouragement in the dance scene.

The Afro-Latinx Dj has had a successful creative trajectory revolving the LGBTQ+ community in the city.

While she is known for her Holy Trinity (Beyonce, Nicki Minaj, and Rihanna) parties held at The Dolphin Tavern, her contribution to the queer community through the past Cutn Paste events approached an issue that many weren’t talking about – the lack of inclusivity the community has for POC as well as gender non-conforming people. 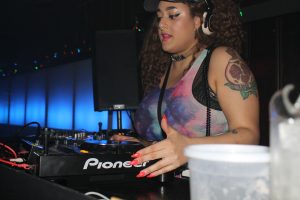 “Some mixed-queer people didn’t fit in the mainstream LGBT culture,” Nolita said. “Cutn Paste was created as a space for them so that they can dance freely.”

According to the City’s of Philadelphia Action Guide, Philadelphia’s LGBTQ Protections, more than 60,000 Philadelphia residents identify as lesbian, gay, transgender and queer.

The same report stated that “transgender individuals face violence, discrimination and lack of access to essential resources at rates far exceeding other members of the community.” 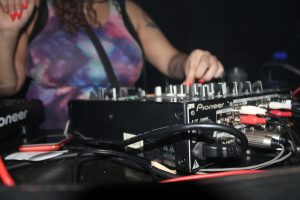 “I believe in spreading awareness throughout the black and brown community, as far as how we are represented as gay,” Beau said. “There is racism, racial bias and lack of inclusion.”

Beau has been a drag queen for the past nine years.

“When you think about the Gayborhood, it has an identity scene that relates more to white people – there aren’t much black and brown representation in the area,” Beau said. 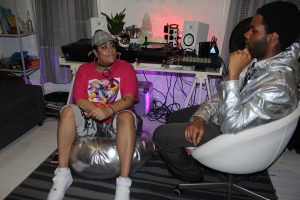 Nolita curates events in dive bars like The Dolphin Tavern because she feels a better connection with those who admire her and her music. Although her events attract 300 to 600 attendees monthly, it’s hard as a woman of color to produce events in the community.

“In other cities, there’s more of a presence,” Nolita said. “In Philadelphia, it feels disconnected. It is a little harder to get people to come out and convene together compared to other places.”

When the sun goes down, the transformation of Drew Gaver begins. “I started drag, in earnest, about three years ago,” said Gaver, who performs as BEV. “I dabbled around with just kind of goofing off [continue reading…]