The Nationalities Service Center at 1216 Arch St. helps more than 5,000 immigrants and refugees every year adjust to their new lives in Philadelphia. They offer a range of services including English classes, legal services and connecting people to health services. Gretchen Shanfeld has worked at NSC for more than eight years and currently serves as the director of the Health and Wellness Program. The program aids immigrants, refugees, victims of torture and asylum seekers with finding case management, health care, mental health and wellbeing services. 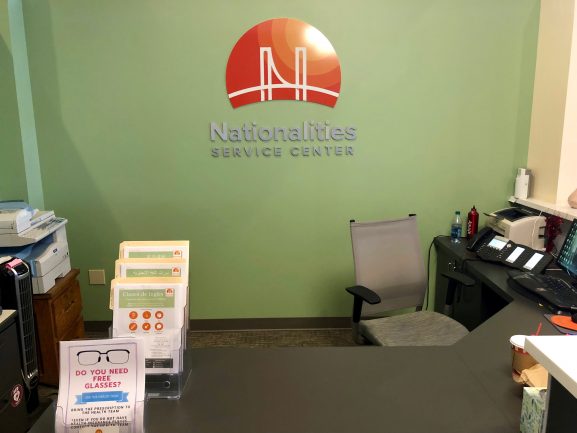 What are the goals of the Nationalities Service Center?

We’ve been around for almost 100 years. We were originally created out of the YWCA movement and our original mission from the beginning has been to support immigrants and refugees as they build a new life here in Philadelphia and the surrounding regions. Currently, we have four main focus areas. One is our legal services, so we have attorneys and immigration representatives and paralegals here to do all different types of immigration law. Anything from asylum to deportation defense to family reunification to citizenship.

We have a number of joint legal and case management services under our survivor services, which is our second focus area. We provide specialized services to immigrant survivors of human trafficking and survivors of domestic violence, and our refugee resettlement and employment programs are housed under those survivor services areas. Obviously, refugee resettlement has been one of the areas that has been most impacted by the administration. We have a very large, robust resettlement program, usually resettling several hundred people per year. But this year we’ll probably resettle just over one hundred people.

Then we have our Language Access and Proficiency Department where we offer English classes as well as translation and interpretation for other community members and organizations. That acts as a revenue generator for the agency, so we actually create partnerships with businesses and nonprofits to offer them support in language access in terms of translation and interpretation.

Last but not least is our Health and Wellness department. That focuses on health access work, mental health and professional case management for individuals with high medical needs.

Are there specific communities you work with or is it more broad spectrum?

It’s really broad spectrum. We’re serving about 5,000 individuals from more than 120 countries every year. It’s a really incredible diversity that walks through our doors in a given year. Our dominant language groups are Spanish and Arabic speakers, but there is a huge mix of other languages from across the world.

Could you tell me about some of the programs and initiatives that fall under the Health and Wellness department?

Health and Wellness was created out of a plan we launched in June 2015, so it’s been around for about three years. It was developed out of the recognition that immigrants have a set of really unique and complex needs. It’s for health and mental health services. Under that umbrella, NCS is the founder and leader of Philadelphia Refugee Health Collaborative, which is a network of refugee resettlement partners and 12 clinics that are providing initial refugee training and ongoing primary care to refugees. That has been around since 2010.

In the last several years, we’ve expanded those refugee-centric health connection services to other populations through our health access programs recognizing those who are coming through other mechanisms, not necessarily as refugees but maybe who are survivors of domestic violence or who, for other reasons, have pretty significant health needs. An initial study we did for the program found that about 70 percent of clients who walk through our doors had no regular source of primary care and at the same time would be hesitant to use the emergency room if needed due to cost. That’s a pretty dire situation where people literally feel like they don’t have anywhere to go for care.

So we’ve expanded that work that connects people to federally-qualified health centers and other resources in the community as well as determining insurance eligibility under the Affordable Care Act or other types of insurance coverage they might be eligible for. Under that program we’ve also piloted bringing health services to people, so we have a partnership with the Villanova College of Nursing. We actually bring nursing students supervised by nursing faculty who provide basic health screening and basic health education at our site here and that’s been very successful in engaging people. Everybody likes having their blood pressure taken and having a free checkup and starting that conversation about finding regular access to care. 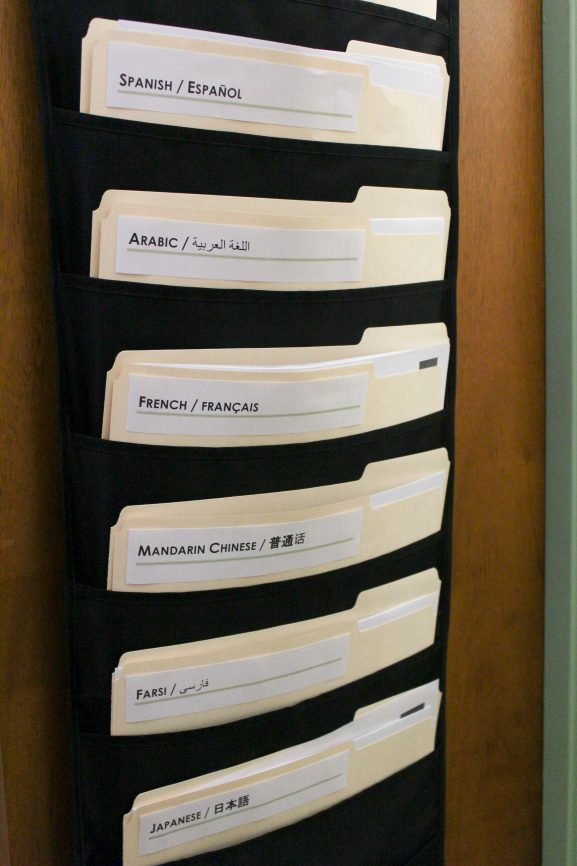 What would you say are the main barriers to immigrants getting healthcare in the city?

Certainly insurance status. I think there’s a lot of confusion or lack of knowledge about the resources you can access when you’re uninsured, which are actually relatively accessible. There are federally-qualified health centers, there’s the city health center. So just having a good understanding that you can go there while you’re uninsured, that you can utilize those services I think is really important. It’s not just the emergency room. Access to preventive care and continued care on a regular basis is really important to [immigrants] and their families.

I think the other big barrier in that is mental health care. Not only the barrier of their current status, but also the barriers around stigma and language access.

Would you say immigrant populations you work with have the same stigmas around mental health we do?

Yeah, I think in many communities there are stigmas around mental health services as well as the Western model of talk therapy or medication for mental health challenges may not be familiar to people. We really try through our wellness programming and other initiatives to have a wider understanding of how people meet their wellness needs. It’s not just, “Ok, so you feel down and you should go see a therapist,” but many of us when we feel down connect with a friend or family member, we choose exercise. We have a breadth of coping mechanisms at the ready. Or sometimes we forget about those and we need a trusted friend or advisor to remind us of those.

We’ve done some interesting work for the last several years using a nationally recognized screener, the Refugee Health Screener-15 (RHS-15), which is really a mental health screening tool with clients enrolled in our case management program. It’s been really helpful in opening up that conversation. We’ve actually added on some questions as part of that screening to engage people with coping mechanisms and to talk to people about coping. We found that even for our immigrant populations, a lot of the same coping mechanisms that you and I might use are used in the populations we’re serving. The top three that we found in conducting more than 300 assessments were religion, friends and family and exercise. For immigrant communities and for many communities those are the things people rely on in times of stress and when times get tough.

How would you say the challenges and stressors associated with immigrating into the city might take a toll on mental health?

I think there’s always stress in that it’s such a major change. That’s often compounded for many of our families with the reality of having to start over. They may have to redo any training or professional experience. Many immigrant families have to start over. That process, as you can imagine, is really daunting. Unfortunately, right now with this moment we’re at in our country, that’s always hard and the current political situation has heightened that for people and raised the stakes.

How would immigrants go about getting healthcare if they don’t have insurance? Are there avenues they can turn to?

For general primary care there are a lot of options. City health centers, federally-qualified health centers. There are a growing number of health centers that are open to those who are uninsured that have expertise and awareness and a bilingual staff to serve immigrant and refugee communities. I think clinical mental health services is the next frontier where we need more avenues and access. That will be good for when other coping mechanisms aren’t enough and stress levels get so high there’s availability in talking to a professional and getting that level of support. It’s really imperative that when people reach that point when they say “Yes the stress is impacting me so much that I need to talk to someone” that we have that at the ready and we have language access and cultural competency and are ready to meet that person’s needs.

What would you say are the main health or mental health issues that concern immigrant populations?

I think it’s as varied as the communities are. I think on the surface level just having access to primary care to know what the particular health challenges are is really important. We have found through our work with the Philadelphia Refugee Health Collaborative that the number of new diagnoses for diabetes and hypertension after being connected to primary care in the U.S. is pretty high. People have chronic conditions they’re able to get support in managing for the first time and that’s really important.

What other issues that affect immigrants would you like to see more coverage of in the media?

Right now it feels like the moment we’re in, the things coming at the communities we serve are pretty fast and furious. Just in the last week and a half we’ve had a pretty major change around asylum and the adjudication of domestic violence cases. We’ve obviously had the family separation stories and an emerging wave around the issue of public charge and access to public benefits for immigrants.  I’ve been at NSC for eight and a half years and it’s an unprecedented moment in the ongoing attack on immigrant communities.

I think a lot of the media is covering many of those, I don’t know that we’re often getting to the level of how it really impacts people. I heard a colleague from another organization describe it as psychological warfare against those communities. I think when you’re in the midst of that kind of thing it’s hard to even reflect because you’re just in that mode where you need to be prepared, respond and be ready for the next [thing].

-Text and photos by Laura Smythe.

Matt Desmond and Alec Palmer have built a support network among sports media professionals, offering a safe space to talk about the professions stresses and uncertainties in the wake of coronavirus. [Read More]

Olney: New Healthcare Facility Aims to Connect With The Community

Christopher Smith is the assistant manager of environmental services at Jefferson University Hospital. In his spare time, Smith educates and trains his fellow community members about nutrition and physical fitness at his Hunger Games Fit [Read More]