Didier William is originally from Port-au-Prince, Haiti, and came to the United States in 1990 at the age of 6 with his father and brother to seek asylum. His mother and another brother arrived just a year prior.

The political instability at the time that caused many Haitians to come to the U.S. during this period stemmed from the collapse of the dictatorship of Jean-Claude Duvalier, also known as “Baby Doc,” who fled Haiti in 1986.

In the aftermath of this collapse, the newly elected government who replaced Duvalier was overthrown and protests ensued. Regimes changed quickly and political turmoil ensued in the following years. It’s at this time that William and his family began their new life in Miami, where a sizable Haitian community formed.

Once in the United States, William became interested in art at a young age. His second grade teacher noticed his talent and convinced his parents to send him to a magnet school in south Miami that had an arts program.

William remained active in the visual arts throughout his schooling and eventually went on to receive his Bachelor of Fine Arts degree in painting from The Maryland Institute College of Art. He then received his Master of Fine Arts in painting and printmaking from Yale University School of Art. Today, he is the chair of the MFA Program at the Pennsylvania Academy of Fine Arts.

Currently, William has work on display at PAFA alongside artist Nestor Armando Gil in their joint exhibit “SWARM.” The artwork in the exhibit explores community building, constructed ideas of immigration and the artists’ respective Haitian and Cuban heritages. 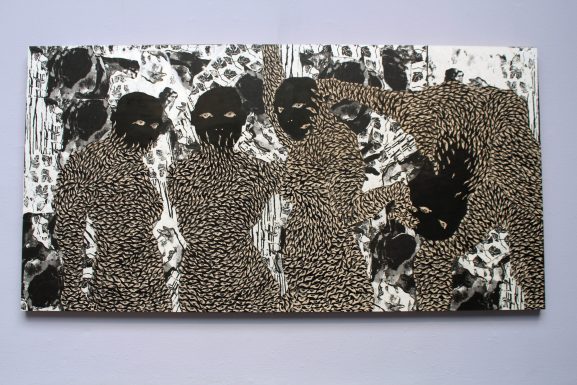 What would you say connects you to art? Do you have a favorite part? What initially drew you to art?

Formally, I would say painting. I’ve always been drawn, attracted to painting. But even more broadly, I think because I left Haiti so young and the circumstances under which we left Haiti, I think forced us to have to leave a lot behind — a lot of family history, a lot of clothing, I mean most of our lives we left behind in Haiti. So my memory of Haiti is a combination of oratory, my own very slim experience and then my own research. I think there’s a [power] in that imaginative space.

And that’s really where my artwork comes in. So the space and the history that I’m tapping into in my paintings, I really do think is called together from a sort of polymorphous system that many of us in the diaspora rely on for stability. It’s a space where everything is present all at once and the ground is constantly shifting. 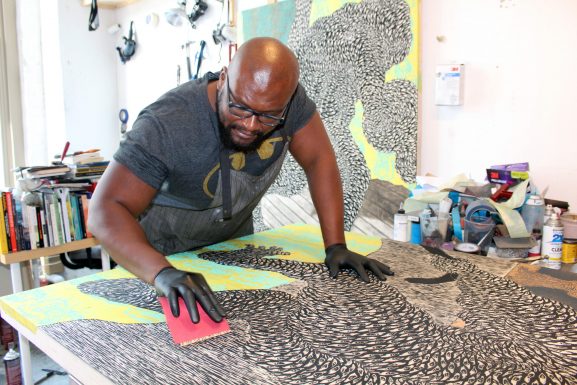 It seems like you explore themes related to your background in Haiti through your art, and more particularly in the exhibit “SWARM.” Could you talk about what some of the specific themes are and what ideas you’re thinking about?

What you’ll notice with the paintings is all of these bodies are sort of carved and covered in eyes in an effort to really return the curious gaze that many of us who occupy unconventional bodies are subject to, the same gaze that often costs us our lives. Now, how do I then take that and form a narrative around it? For me, that narrative is coming from my own lived experience, it’s coming from personal family anecdotes, it’s coming from Haitian history that I sometimes bring into the work. It’s also coming from Haitian mythology and worship systems in the form of Vodou. It’s a combination of all of those things that kind of come together and playfully antagonize one another in order to come up with spaces and landscapes that in some ways are otherworldly, but are also at the same time very familiar.

I tried to expand the container of the body beyond race, beyond gender and sex, beyond ethnicity, to really interrogate the container itself. What kinds of containers do we frame for one another, do we compose for one another, that’s embedded in this idea of the gaze? And if we think about expanding and contracting those containers, what do we end up with? And for me the eyes serve as a visual motif to articulate that, but also as a kind of topographical intentionally abstracting element too. 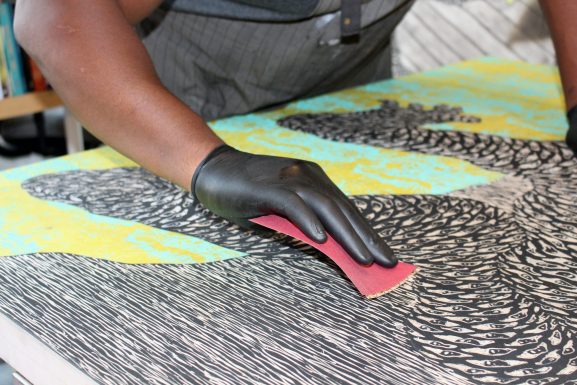 What are some of the points you try to make through your art about colonialism?

I think Haiti is one of the prime sites for black self-actualization, the first independent, free black nation and the only group of slaves to stage a successful rebellion. And in that way there was a kind of refusal of the colonialist gaze. One could even argue that one of the reasons why Haiti is in the condition that it’s in is because it has constantly refused the colonialist gaze, the white gaze. And it has never been ashamed of its deeply, deeply African roots. And so that element of refusal I think gets embedded with blackness in my work, necessarily so, and becomes a condition in which I try to reframe the landscape, I try to reframe the body, I try to reframe gravity. And imagine if we jettison all those ideas about what a “black body is,” what kind of agency can I then embed the body with? So I take that thread and weave it into every part of the practice, the materials, the images, the colors. 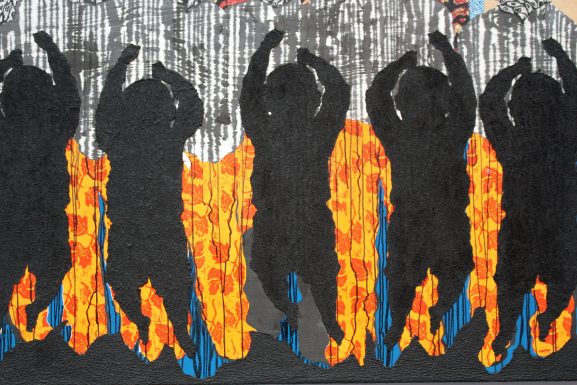 Can you explain what you mean by this thread of thinking involving the materials you use? 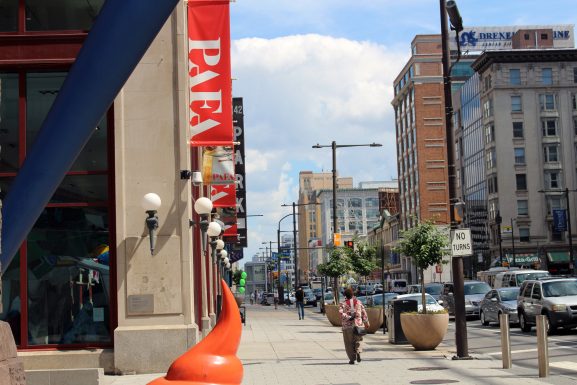 When you’re working with MFA students, do you see that it’s natural for them to explore parts of their identity and parts of their background, or is it something that you sometimes find yourself encouraging students to explore?

I think it’s natural for young artists to begin with the personal and sometimes remain with the personal. I think it’s hard, particularly in this moment, to deny oneself the opportunity to interrogate the self. Especially when notions of the self are being relentlessly attacked and diminished and vilified if that self deviates from conventions of white supremacy.

I think young artists of color and young artists more broadly are becoming hyperaware of the ways in which they make and create and contribute to the cultural landscape. If I think about my time teaching, I’ve had to do very little prodding to get students to consider their own personal narrative in their framing of the world.

You mentioned this idea of mythology being incorporated into your work. Are their specific narratives that you find yourself returning to?

Not really. I move across the cultural spectrum a bit. Currently I’m thinking mostly about Haitian Vodou as a worship ritual, as a cultural entity, as a pantheon of gods and goddesses and characters that shape a tremendous part of the history of the country. And it’s providing a tremendous amount of clarity for how I want to frame the narratives in the work. So right now it’s specifically that, but I do move back and forth. 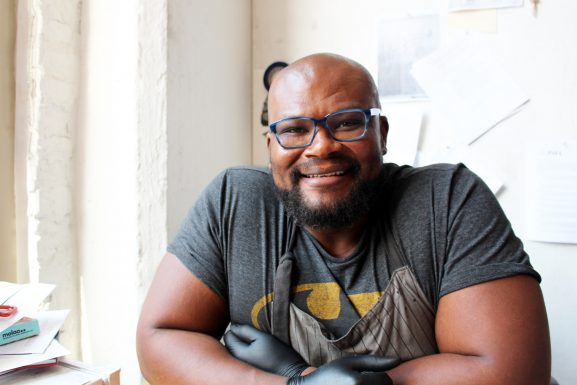 There’s meaning behind the title, “SWARM.” Could you speak about that?

Nestor and I developed a really beautiful friendship over the years. We’re both thinking about how we re-situate our relationship to the histories of the countries that we’re from, to the spaces that we occupy here and to the potential futures that we wanted the work to point to. And we’re thinking about, ‘What is the framework that sort of colors that condition for us? What is the way in which we want to think about that process, that very elastic process of shifting spaces, of shifting narratives, of shifting histories?”

And “SWARM.” in it’s kind of allusion of a polymedial, nomadic, constantly shifting entity that is never really settled and is sort of constantly re-shifting and reshaping itself and readjusting itself to the environment. There was something really powerful about that for us, particularly since there’s a kind of relentlessness associated with the word as well. And I think it wouldn’t be far fetched to say that we wanted to reclaim some of that narrative that I think the [political] right has used to diminish and dehumanize immigrants. We wanted to take that narrative and turn it back into a form of agency for ourselves. 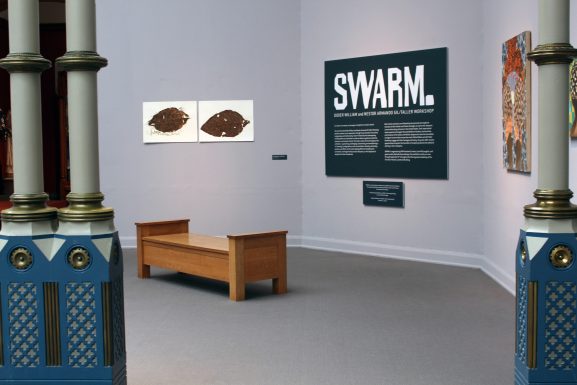 — Text and images by Jenny Roberts.

How To: Apply For A Green Card (Adjustment Of Status)

It’s hard to understand immigration without understanding the process that immigrants have to weave their way through in order to maintain a stay in another country. “It is a serious process,” said Jane Cowley, public [Read More]

Eugene Desyatnik is the president of the Bella Vista Neighbors Association. Desyatnik, a naturalized citizen hailing from the former Soviet Union, has lived in Center City for more than 12 years, recently moving to Bella [Read More]

Immigration: As Flow Of Refugees Slows, Those Already In Philadelphia Settle In

Amnah Ahmad is the associate director of the Arab American Community Development Corp. at Al-Aqsa Islamic Society in North Philadelphia. Ahmad, along with a handful of other volunteers, works with refugees and immigrants from Middle [Read More]