Arriving at her third empty newspaper box of the day, editor-in-chief turned delivery-woman Mary Sweeten (above) pulls bundles of her newsletter from the back of her husband’s Volkswagen. She loads the box with copies of The Shuttle, the official publication of the Weaver’s Way Co-op, careful to recycle the plastic binding afterwards.

“That woman back there that came and said ‘Oh, there’s a new Shuttle? That never happens. I swear, I didn’t plant her there,” Sweeten said, taking a sip from her turquoise travel mug.

The humble 64-year-old has been the editor-in-chief of the Weavers Way Co-op’s monthly newsletter for six years. What once began as as a newsletter covering co-op meetings now features articles about community events, new products at the store and area social justice issues. Weavers Way opened its doors in Mt. Airy in 1973 and is a major hub of events and information in Mt. Airy Village, the collection of businesses and community organizations along the intersection of Green Street and Carpenter Lane. It has since expanded to Chestnut Hill and Ambler, which marked its first anniversary in September. 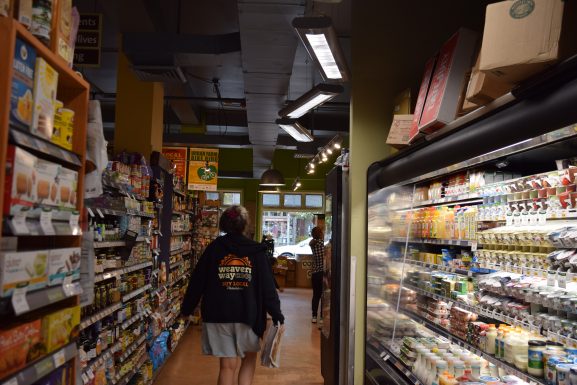 How did you get started at The Shuttle? `

Early on [the founders of the co-op] decided they needed some kind of newsletter or something to distribute the news about stuff they were doing in their meetings and stuff. Over the years it’s morphed into a fairly robust product. Although now, in 2018, like other paper products, it has had its problems. People don’t read on paper as much as they do. We don’t charge for it, so people get it in the mail whether they like it or not. Back in the old days, people used to have trouble telling whether or not people were reading the paper, which was whether or not they bought it, and that problem hasn’t been solved.

The paper used to be, for a long time it was like a newsletter, mimeograph newsletter. At some point they actually started printing it, probably in the 2000s, maybe in the 1990s. It got settled down to be about every other month and then they got it up to every month. And the whole time, this is being edited by a guy who’s not here anymore, who really was the guy who founded it, was really good, named John McGoran. And John basically cooked up the idea once all the local papers were starting to fold, that maybe we could turn it into a local paper that would substitute for those local papers. It was sort of hard to figure out how that would be paid for and how that would work, but if there’s any place you could do something like that, that would probably be Mt. Airy and it might be with the co-op.

But, the problem is that the co-op sort of went in a different direction and he decided he wanted to write more and so he left. And he left me with this paper that had a lot of legacy, but was hard to figure out how to pay for.

What is a typical day working on The Shuttle?

I basically work a normal schedule, because it’s not like we have breaking news, and The Shuttle isn’t the only thing I do. We have a weekly electronic newsletter which is basically events, stuff that was too late to get in the Shuttle, stuff that we wanna promote and neighborhood stuff if I can get it together. That’s basically once a week and takes me about a day.

Basically, the whole time I’m working, I’m collecting stuff. I’m talking on the phone or by email with people that wanna contribute to The Shuttle. Some of those people are regular contributors, some of them have been doing it for years, and some of them are business people or neighborhood people who want stuff in The Shuttle or in the e-newsletter. And twice a month we have to do another thing called the E-Shopper, which is all about what’s on sale and what we’re promoting. 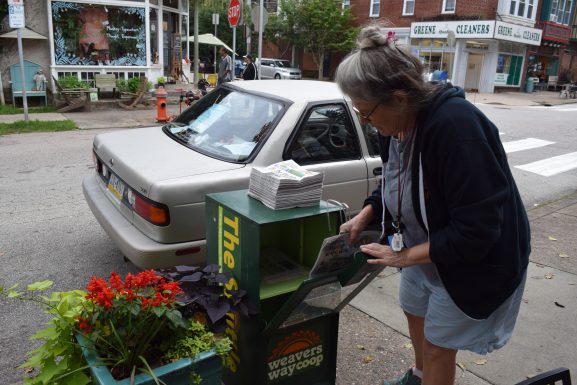 How would you explain Weaver’s Way to someone outside of Mt. Airy?

And the paper, you know, the idea was always that we were out to educate people. That was the use for it anyway. It wasn’t just a newsletter for members, although that’s certainly a thing that you want. It’s a way of spreading the word about stuff. And that’s been a co-operative thing and it’s what people in the neighborhood want to do. What they used to want to do, anyway. Well, I think that they do, but for many of our members it has been around for so long that I think for most of our members it really is a grocery store to them. I think they go other places and realize they’re lucky to have such a responsive and responsible grocery store. And maybe that’s all they care about. We had member appreciation weekend this last weekend and I was helping to hand out cake, I was up in Chestnut Hill but, still, it’s not that different out there and no one even knew it was member appreciation week. They didn’t care, they wanted to shop anyway. They were getting five percent off and they didn’t even care.

I don’t want to underestimate how much of it is about the food, and that people like the idea of having a good place, that they live in a neighborhood that has a good place to go grocery shopping. So, from that point of view, it is community because it is the kind of community you live in. One community has the best disco, our community has the best grocery store, and a grocery store where you can have some input into what’s being sold there. So, that does say a lot about what kind of community it is. 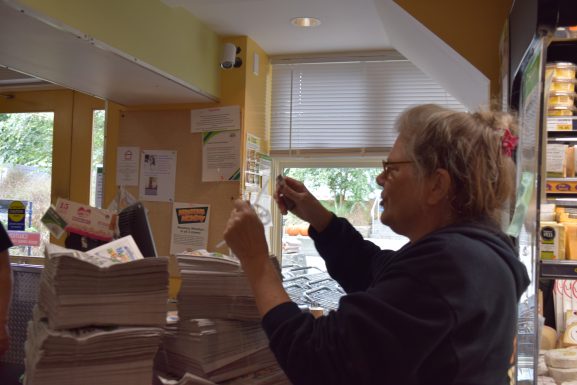 What, in your opinion, is the connection between Weavers Way and the community?

My boss uses this thing that he picked up somewhere, he calls it third place. Your first place is your home, and your second place is your work. Your third place is someplace you go that you feel like you belong and that you know people there, and it’s the place where you can get stuff done. And he wants the co-op to be your third place. That’s kind of the way I see it, too. It’s not a substitute for your family, but it’s a place that embraces a wider group of people.

A lot of people make the mistake of thinking there’s a lot of things we shouldn’t be doing because we’re the co-op. And, at the end of the day we’re a grocery store, so there’s things we do because we’re a grocery store. People say ‘Well how can you sell soda?’ and we say, ‘Well, we don’t sell soda, we sell biodynamic cane sugar blah, blah, blah,’ and yeah, it’s soda but people like it. But, Weavers Way had these seven principles, the International Co-operative Principles, P7 I think, is about being welcoming to all, and I think that’s partly where [embracing a wider group of people] comes from. It’s baked into the notion of the national co-operative’s principles. 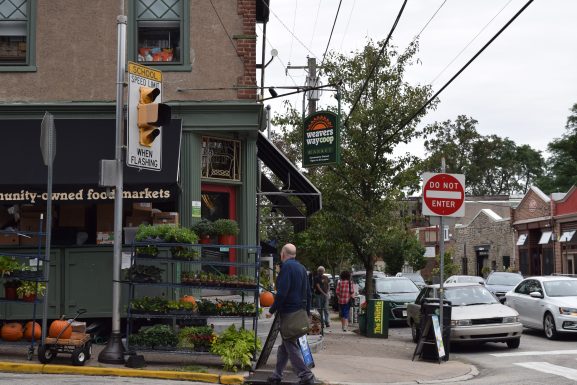 What is the relationship that The Shuttle has with the community as one of the only publications for the Mt. Airy neighborhood?

When they first started the paper, it was, you know, to tell people what happened in co-op meetings. Then they started creeping other stuff in it. People said ‘Can I write a story on what I think about on the grape boycott?’ and I said sure. So that’s over on the community side of it, definitely. And, you know, we spend money on it. The paper doesn’t make money. We’re not trying to take a specific point of view except that we’re trying to support the co-operative principles.

We’re kind of in transition right now. People really like it, people like that the co-op has a newspaper. People like that the newspaper isn’t just about co-op stuff, but it’s hard to figure out what it should be about. Our next problem is figuring out if it should be a different kind of newsletter, like one that really focuses on food and just do co-op business online like a lot of organizations do. One where you can subscribe to it and find out what happened in the meetings. So, this is what we’re sorting out right now.

How does this community mindset reflect in the content of the paper?

Well, the community partly drives what we do and the fact that we’re here makes people think about the community.

The answer to how dare I put this in the paper is that this is what we as a community are discussing. I knew it was going to cause a scene, she knew it was going to cause a scene. I’m not just trying to gin up controversy, but now people on the other side of this controversy have the opportunity to say ‘What this woman said is absurd.’ And it also fits into the topic of a grocery store because we’re talking about boycotting oranges, you know? She chose to bring it up, she’s a member and everything, she chose to bring it up because it was something that the co-op was doing. It’s not, like, way out of left field. I’m not going to let somebody start ranting about Trump unless Trump has done something, like, say we all have to eat papaya because they’re GMO, which they are. If somebody wanted to rant about Trump for that reason, I would be happy to. 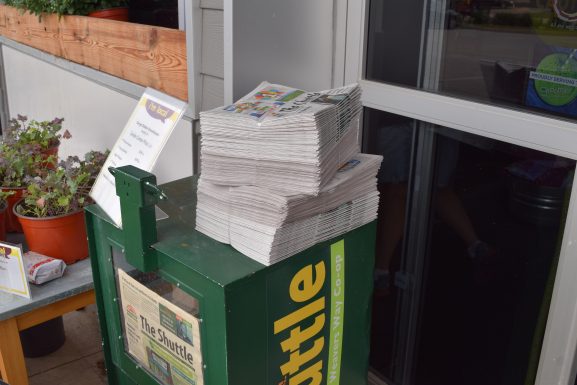 As the voice of many Mt. Airy residents, what are some issues that you see are central to the area?

Mt. Airy is a fairly nice part of Philadelphia. A lot of people there have the option of moving to the suburbs, and a lot of them have because of their kids. I think people who stay here take seriously the issues of poverty and schools and stay to try and do something about it. Sometimes they work harder at it than others, sometimes just being here they think ‘Well, we’ve gotta make it a little better.’ We have people in the co-op who have run for office. A guy who used to be the city housing director, his name is John Kromer, ran a Weavers Way workshop explaining how the committee system works. Like, who your committeeman is, because most people don’t know. Most people don’t understand how this works. So he had this thing, and 50 people came and did charts and graphs and stuff and, you know, what the divisions are and how it works and how they decide what they are and what committee people get elected and what committee people do. It was great.

– Text and photos by Michaela Althouse