Sheila Avelin, owner and manager of Big Blue Marble Bookstore in Mount Airy, strives to maintain a cozy and accessible literary space within the fast-paced technological world. Located at 551 Carpenter Lane, Big Blue Marble is nestled in a central part of town, neighboring the Weavers Way Co-op and Moving Arts of Mt. Airy.

Avelin, a former English teacher at Friends Select High School, has lived in Mount Airy for nearly two decades. As a long-time resident and educator, Avelin wanted to create a community-oriented business that could host events for people of all ages. In 2005, she made her dream a reality and opened Big Blue Marble Bookstore, which proudly houses a café and community room available for book groups, classes and events. Avelin fosters a place where residents of Mount Airy and beyond are able to connect and unwind. 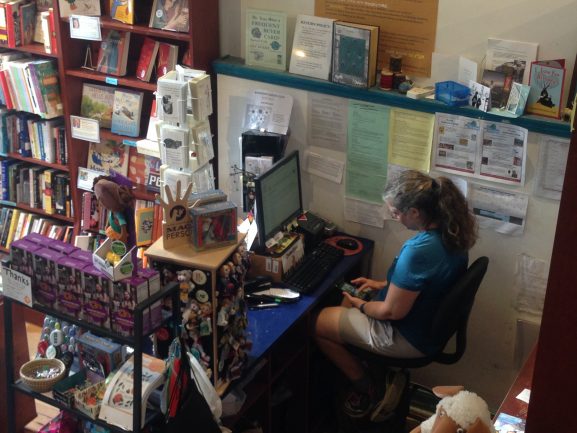 Where did you first get the idea to open a bookstore in Mount Airy?
I quit my job teaching English to spend two years in Madison, Wisconsin, while my now-wife was getting her graduate degree, and I realized while I was out there that I didn’t want to go back to teaching. I knew that Mount Airy would support a bookstore, and I had worked in bookstores and libraries before. But I knew there were things about running one that I didn’t know, so I volunteered at Rainbow Bookstore to learn sides of the business I hadn’t been exposed to as floorstaff.
What are some of the biggest obstacles you have had to overcome in opening and maintaining Big Blue Marble Bookstore?

In what ways do you believe Big Blue Marble Bookstore helps bring the community together?

Our events are a huge part of what we do, and Elliott batTzedek, my event coordinator, does a fabulous job, not only in bringing authors to the store for readings, but also writers who teach classes, doing movie showings, launch-day parties for big titles, and our Kids’ Lit Fest every spring, a writing camp in summertime, and more. We even host board game nights and a Dungeons and Dragons group. People are really looking for that “third space” that’s not home or work or school, where they can just go and be, and we try to be that place for bookish people. 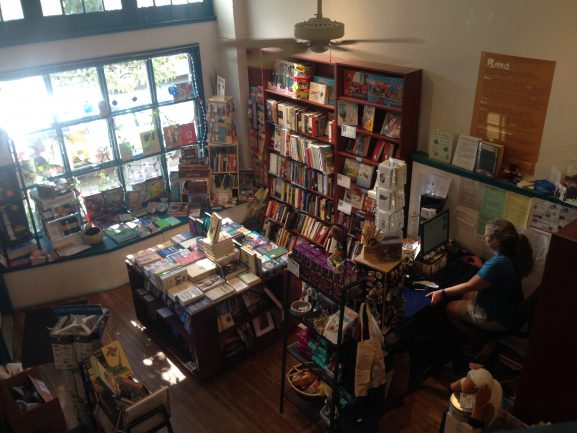 How does Big Blue Marble Bookstore give back to the community?

We have given back to the community by sponsoring various book drives over the years to benefit schools, by donating to fundraising auctions, and by making our meeting space available to community groups, among other things.

We haven’t been involved so much in work on adult illiteracy. What we could do would be limited, like offering space to volunteer tutors to meet if someone approached us about that, but no one has. 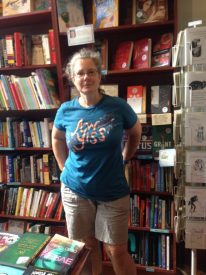 Bookstores and libraries have different missions and it’s really crucially important to keep libraries open because we truly can’t reproduce the work they’re doing, not just in adult literacy but all sorts of areas: internet access, after-school programs, job-search support and more. Because they’re publicly funded and we’re not, they are able to work toward goals that don’t end in an exchange of money for a product. This actually makes bookstores a terrible choice for combating illiteracy because a bookstore can’t afford to open in a neighborhood with a high adult illiteracy rate. But that would be a critical place to open a library or to have a tutoring program in a school or community center. The best way anyone can make a different in this city in terms of adult illiteracy is to advocate for public funding of libraries and expanding access to tutoring programs.

— Text and images by Cynthia Ferraz and Taylor Schwartz.

Since 1984, Philabundance has been operating out of South Philadelphia with one goal in mind: ending hunger in the region. Today, the nonprofit organization serves approximately 90,000 people per week. Glenn Bergman, a former health […]

The Big Blue Marble Bookstore, located at 551 Carpenter Lane in West Mount Airy, is the place where a group of women meet monthly to discuss books about women. The Women of the World Book […]

Arriving at her third empty newspaper box of the day, editor-in-chief turned delivery-woman Mary Sweeten (above) pulls bundles of her newsletter from the back of her husband’s Volkswagen. She loads the box with copies of […]