Esperanza is a nonprofit organization that aims to strengthen the Hispanic community in Hunting Park through education, economic development and advocacy. 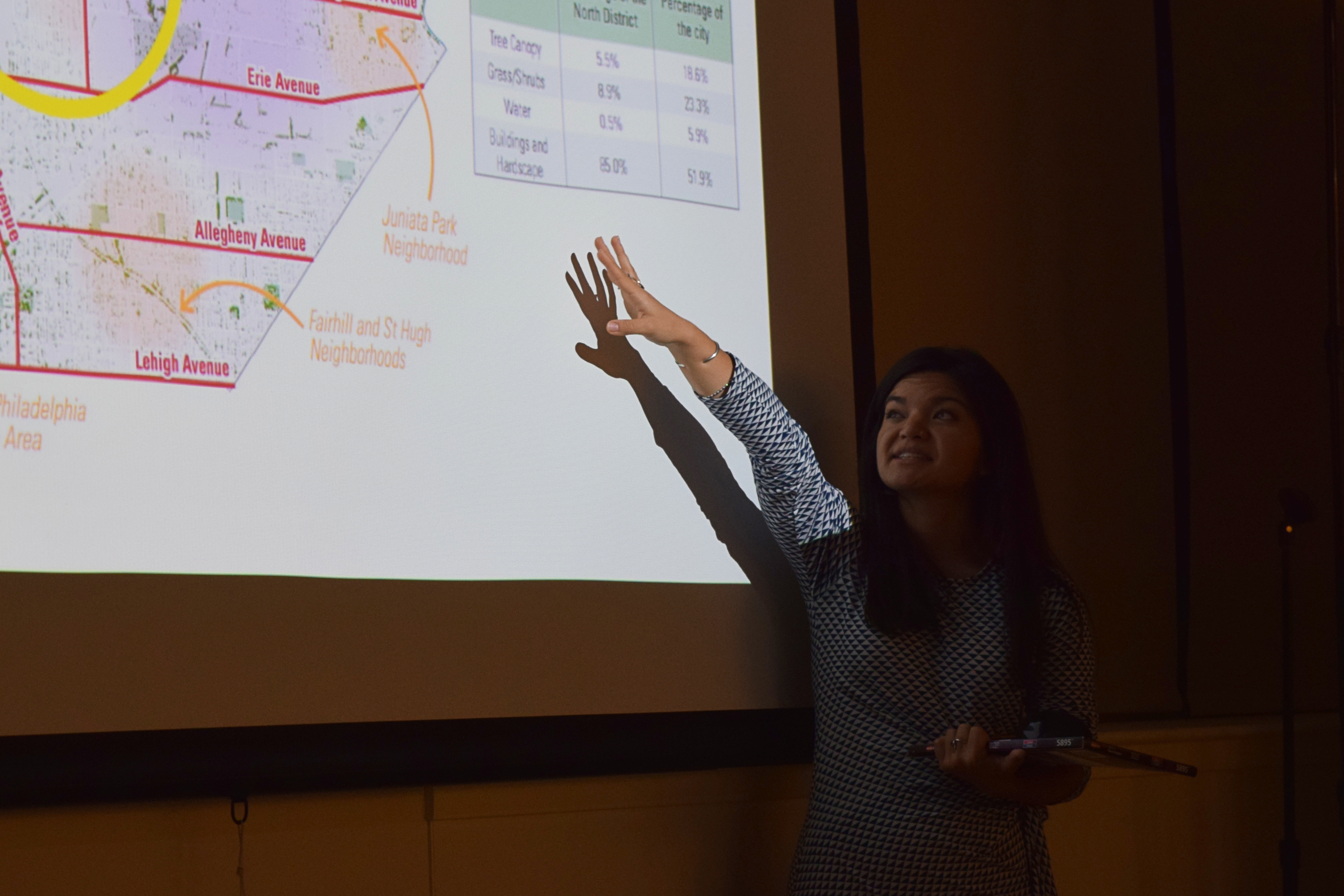 “Heat is the most dangerous extreme weather event,” Sarkar said. “There are more hospitalizations due to heat than any other type of extreme weather.”

She presented a slideshow about rising temperatures in Philadelphia and disparities in heat levels across different areas of the city.

“There are neighborhoods that will experience that heat more severely than others,” Sarkar said. “So it’s definitely something for all of Philadelphia to be concerned about.”

According to research by the Office of Sustainability, Hunting Park is one of the hottest neighborhoods in Philadelphia. Surface temperatures in the area reach up to 20 degrees higher than those in other parts of the city.

Climate change is expected to worsen the problem. Since 2010, Philadelphia has experienced its three hottest summers and most days over 90 degrees on record. Climate scientists project that residents could experience as many as 52 days-per-year of temperatures above 95 degrees by the end of the century, Sarkar said.

Residents split up into small groups to label maps of Hunting Park with symbols and stickers that identified cooling resources in the neighborhood, such as parks and public pools; barriers to accessing those cooling resources; and potential sites for cooling solutions like trees, green spaces and cooling roofs. 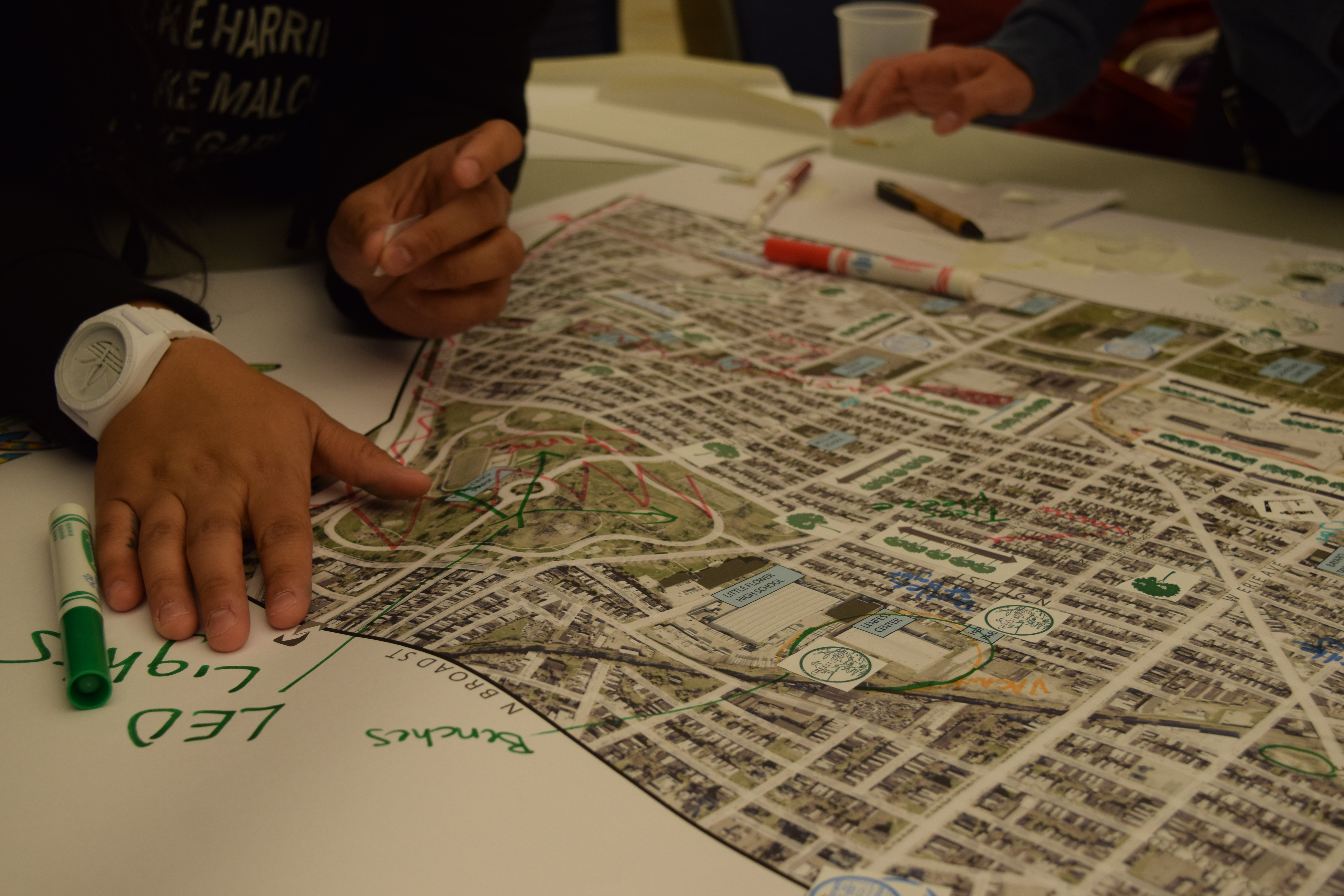 Residents named the lot behind The Lenfest Center (3890 N 10th St), the parking lot for Cousin’s Supermarket (4037 N 5th St) and abandoned homes throughout the neighborhood as potential sites for tree planting and green spaces.

They also named violence and crime as two deterrents for leaving their homes to access cooling resources during hot days.

The workshop was part of the Office of Sustainability’s Beat the Heat pilot project, which began on June 25. The project aims to study how heat is experienced in Hunting Park and work with residents to implement solutions.

The Department of Public Health, Parks and Recreation, Water Department and Office of Emergency Management are also partners on Beat the Heat. They work in collaboration with Hunting Park community organizations like Esperanza, The Lenfest Center, Hunting Park United and North 10 CDC.

Over the summer, resident volunteers called “heat ambassadors” tabled at events and went door-to-door in order to give out hand fans and water bottles to neighbors and ask them to fill out surveys how they cope with heat. 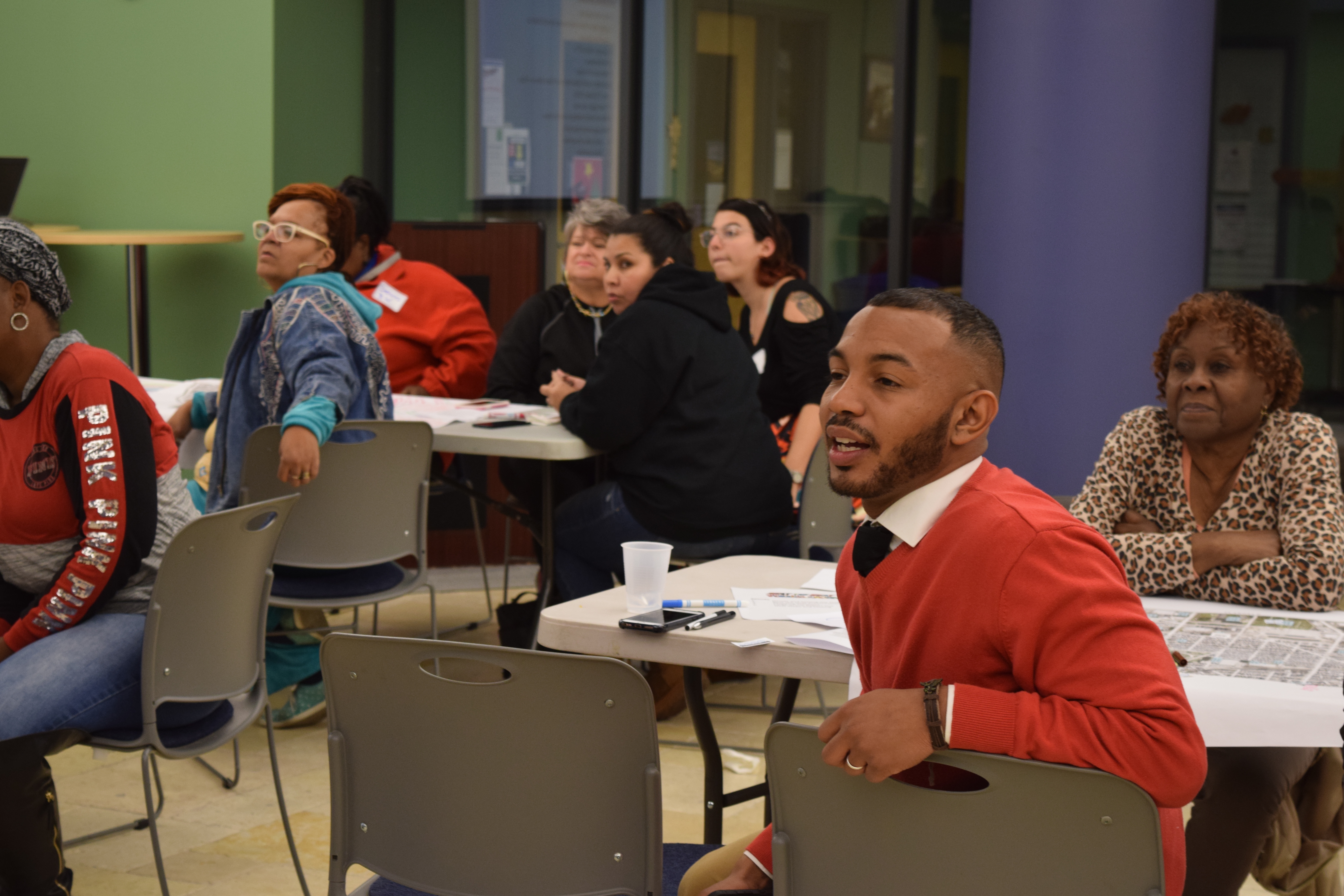 Jose Ferran (above) is one of those heat ambassadors. He said that fighting heat needs to be a collaboration between experts and community members.

“I learned a lot from residents that I didn’t know about Hunting Park,” he said. “What I thought could be possible solutions, they had better ones.”

Esperanza has already taken steps to combat heat by increasing tree coverage, as part of its Hunting Park 2022 Strategic Plan.

The organization has worked with TreePhilly, a city initiative, to give out 700 yard trees to the community. It also planted 15 sidewalk trees in collaboration with Pennsylvania Horticultural Society’s Tree Tenders program. Forty-eight more trees will be planted in November.

— Text and images by Brianna Baker and Greta Anderson.

https://vimeo.com/44871433] Along with an experienced bilingual staff, heath and wellness programs, and a connection to the Christian faith, the Esperanza Health Center has added a medical dispensary to its growing list of patient amenities. The [continue reading…]

https://vimeo.com/25050173]   With prices on the rise, residents in Hunting Park look for ways to stay cool this summer. Most homes are not equipped with central air, a technology invented long after many homes were [continue reading…]

Specks of sawdust shimmered in the sunlight as the shrill of power tools echoed throughout the skeleton of a body shop. The sight is no longer uncommon along the 5th Street Corridor of North Philadelphia, [continue reading…]