Cresheim Road resident Ginny Barnwell had no idea she needed to be concerned after a local construction company bought two homes a few doors from her in February. Barnwell, who’s lived on the 7000 block of Cresheim for more than 20 years, was out walking her dog in May when she saw a sign on the door of the homes announcing their scheduled demolition.

“I immediately got ahold of what neighbors I could — Lillian, Nona — and went to our WMAN [West Mt. Airy Neighbors] neighborhood association meeting and that started the ball rolling to go to the zoning committee,” Barnwell said. “It was unbelievable that something like this could happen.”

Barnwell’s initial shock about the impending demolition turned into a monthslong conflict between residents and Tester Construction Group, setting the stage for a larger public debate around development in Mt. Airy.

Unlike other neighborhoods in the city, Mt. Airy has not been a target of developers’ attention until recently. When Tester Construction Group bought 7000 and 7002 Cresheim Rd. it served as a rude awakening for folks who haven’t had to think about the impacts of development and zoning in their tight knit community.

An area full of historical homes, azalea bushes and greenery, Mt. Airy has appeared safe from development due to its higher-than-average real estate costs.

“The thing that I tell everyone about the Northwest is it’s been a generation or two since it made sense, economically, to buy a building just to tear it down and build something different,” community planner Ian Hegarty (pictured standing below) said. 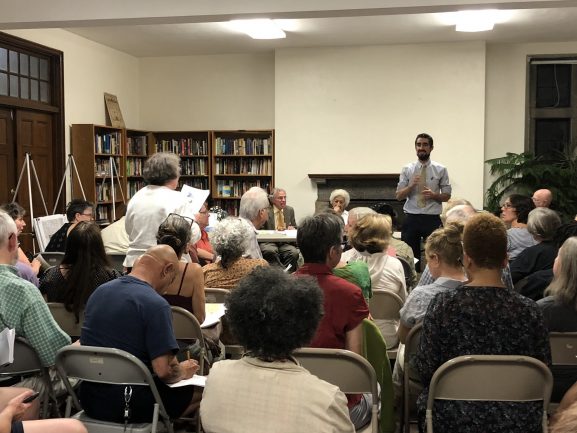 The last few years, however, have seen the construction of two mid-rise apartment buildings on Germantown Avenue with more on the way. Elsewhere in the neighborhood, developer Bancroft Green bought an empty parking lot at the corner of Emlen Street and Mt. Pleasant Avenue and has spoken openly of building a multi-unit apartment building with underground parking garage.

The projects have been an unwelcome change for many neighborhood residents who express their concerns to each other on neighborhood listservs, Facebook groups and Nextdoor threads.

“Zoning is a set of rules that say what you can and can’t do with your property, so it’s something that gets challenged a lot,” Hegarty said.

Linda Jarlett grew up at 7004 Cresheim, where her mother still resides, and now lives just two blocks away.

“This is a neighborhood where you can come in and feel like you belong, you can feel happy here,” Jarlett said. “If you had a home here, it would do good, but if you have an apartment beside someone’s home, it wouldn’t be a good thing.” 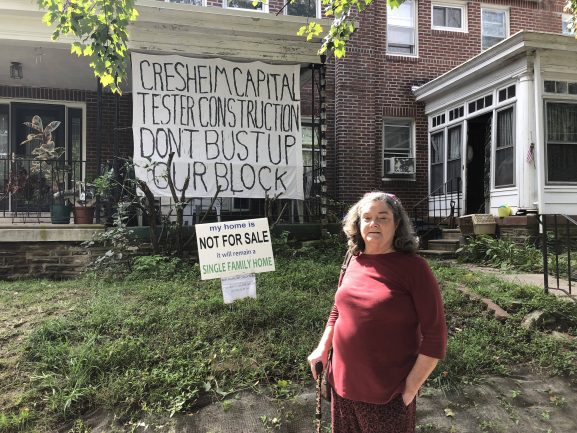 Tester Construction Group’s Cresheim Road project, which proposes an eight-unit apartment building at the corner of Cresheim Road and Sedgwick Avenue, sparked a wave of community outcry. The residents of the 20 or so connected rowhomes have been protesting since March in their attempt to halt the project and the change that is imminent on their block.

One of the most active members of the group mobilizing against the construction is Nona Wright (above), a resident of 7006 Cresheim Road for 30 years

“This is a block of totally intact, totally livable row-houses and they are going to just rip them down,” Wright said. 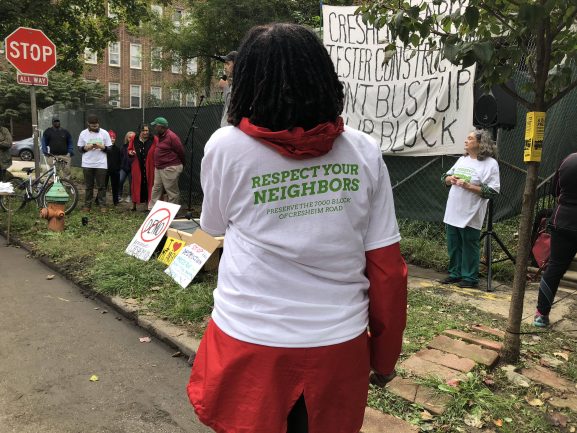 The Consequences of a Zoning Error

Tester’s purchase and plans for an apartment project would not have occurred had it not been for zoning issues on Cresheim Road. Tester was allowed the proposed demolition due to a zoning mistake made by the city in the 1980s. The even-numbered side of the 7000 block of Cresheim Road, which is comprised of connected single-family row houses, had been zoned as multi-family. The opposite side of the street is correctly zoned single-family and residents are petitioning to correct the error.

“People who pay attention to stuff like that knew, but it comes as a surprise to homeowners who don’t have to think about it every day,” Hegarty said.

Councilwoman Cindy Bass turned to the Philadelphia 2035 Plan to remedy the zoning mistake and prevent similar events in the future. The plan proposes specific changes in development and transportation to accommodate growth in the city expected in the next 15 years. Philadelphia has not made a serious effort to create a comprehensive strategy for the city’s development since the 1960s.

The 20-square blocks surrounding Cresheim Road have been accelerated for zoning recommendations, whereas the rest of the Northwest District is one of the last to receive a development plan. The city suggested rezoning 13 areas within the accelerated region.

“The zoning piece is a recommendation that’s holistic for the whole district, but we can’t, realistically, do the whole district at once because we want to make sure that people are informed about what’s happening,” Hegarty said.

After recognizing existing zoning allowed the project, protesters drew attention to oversights in Tester’s plans for the complex as a strategy to prevent construction. Tester’s intention to build the complex up to the sidewalk to was brought to the attention of the Philadelphia Licensing and Inspection Board. As the area requires setback, Tester’s permits were revoked by the Zoning Board of Adjustment after residents pointed out the violation and applied for an appeal. 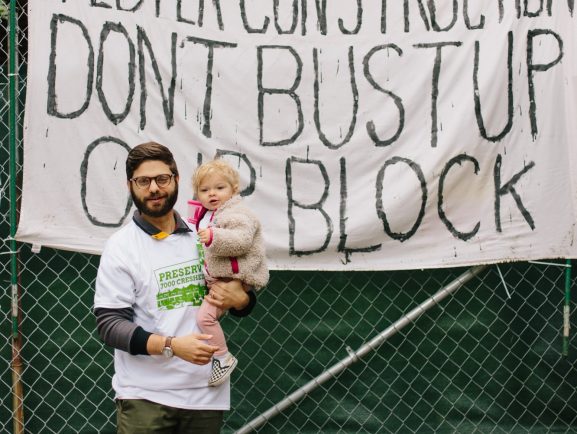 According to Joshua Kleiman (above), who lives at 7010 Cresheim Road, the judge immediately revoked the permit without asking for an appeal due to the large amounts of oversights in the development plan.

“There were some really obvious errors,” Kleiman said. “[Licensing and Inspection] never should have approved the original plans.”

Tester adjusted plans to include the setback, though the revision retained the number of units. Residents then claimed the project violated the Steep Slope Protection 14-704(2) of the Philadelphia Code and again applied for an appeal. A hearing occurred on Sept. 25, which favored Tester and construction was permitted to begin on Oct. 3.

On the morning of Oct. 3, though, local residents and Councilwoman Bass showed up to protest construction. With the help of the councilwoman, the group filed for an emergency restraining order that was approved the following day and is still currently holding the construction off.

“We had a meeting on the street and Councilwoman Bass was here,” Barnwell said. “She made it very clear to Mr. Tester that she had no problems laying down in front of a bulldozer and that she’s right there with us.” 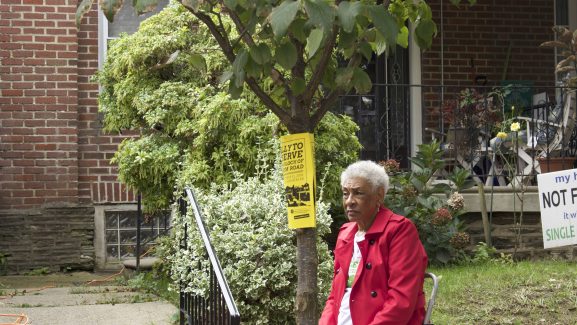 On October 13, nearly two weeks after the morning confrontation, Preserve Cresheim, the neighborhood group devoted to the cause, held a rally with Councilwoman Bass to build awareness and show solidarity between neighbors. It was announced at the rally that the group held a meeting with Tester and that the developer had tentatively agreed to stop plans.

“They don’t know who they’re wrangling with,” Wright said. “We got a lot of angry grandmas and aunties.”

A representative from Tester said they were trying to work with the community to be sensitive about the needs of the residents and find the balance of character and charm that the neighborhood is looking for. Residents say that while Tester is still in talks with Councilwoman Bass’s office, communication with local neighbors has dwindled significantly since the rally.

Nafisa Watson lives at 7004 Cresheim with her grandmother Lillian Scott (above), a resident of more than 30 years. Both fear the potential damage the construction could have on their home as construction efforts already caused damage to the retaining wall on the property behind 7000 Cresheim. The wall was hit by trucks as they installed fences around the two contested properties.

“These homes are connected by the hip,” Watson said at a rally, “All we can think of is: what’s going to happen?”

Her question is on the minds of many local residents as they reflect on whether or not this conflict signals a trend toward increased development in the area and what this would mean for the neighborhood.

Roman Strakovsky moved to Mt. Airy from Fishtown two years ago. He is less opposed to development in the area, mentioning the multiple apartment complexes adjacent to the Cresheim Road site.

“It’s not like there is no multi-family housing in the neighborhood,” Strakovsky said. “There’s apartments all over the place and they don’t have any negative impact on the quality of life.”

Some residents and activists, however, are more concerned with the impact development will have on the community-centered ideals of the neighborhood. Heather Pierce is the president of West Mt. Airy Neighbors, a local organization crucial in the Preserve Cresheim efforts.
It has held multiple meetings to support the community members and assist in providing resources such as opportunities to speak with the developer and information about the status of the project.

Pierce was a speaker at the Oct. 13 rally where she stressed the vitality of the community activism in this conflict and maintaining that approach on future development issues.

“Don’t just look at what’s happening on this block, ’cause guess what?” Pierce said. “Two blocks over it could be happening too. You want them to support you and they want you to support them. That’s how we develop this community.”

– Text, images and audio by Michaela Althouse and Morgan Slutzky

South of South Street: Five Improvements in the Works

Residents living south of South Street have witnessed rapid change over the last decade. From Ori Feibush’s new construction and rehabilitated homes to closing shops and bars, the area has been in a constant state of flux. According to census [Read More]

Lynn Dorwaldt has always loved puzzles. “Word puzzles, crossword puzzles, logic puzzles,” she said. “I love the journey of trying to find the answer to something.” Dorwaldt, the librarian at the Wagner Free Institute of [Read More]

Drexel is bringing a new community center to 35th and Spring Garden streets through a gift from alumni Dana Dornsife and her husband David. The aim of the Dana and David Dornsife Center for Neighborhood [Read More]