It is not exactly common for a Philadelphia neighborhood to be served by two registered community organizations (RCOs). Members of EFCC and EFF often find themselves in conflict with one another, reflecting persistent clashes around zoning and development that tend to characterize life in the neighborhood.

“There seems to be three or four different factions,” said Ralph Spiegel, a manager at East Falls Farmers’ Market. “There’s territorialism between all these groups.”

EFCC has been active since the 1960s, but some residents became frustrated with its proceedings in 2014, believing it to not be adequately transparent and overly aggressive in nature, with attendees and members regularly shouting at each other in meetings. EFF was formed in 2014 as a response. While it engages in other activities such as planning events for the neighborhood, the primary function of an RCO is to work with the city to make decisions about zoning. Both organizations work cooperatively with East Falls Development Corporation on zoning issues.

The relationship between EFCC and EFF, as well as the newspapers, is virtually nonexistent, but it has not always been that way. EFF was started by younger individuals in the community who moved to the neighborhood more recently, while EFCC is largely made up of older “Fallsers,” many of whom have lived in East Falls for decades or their entire lives. This disparity in background and ideology has fueled tension from both parties in regard to how exactly the community should be developed, and even over who is allowed to speak in meetings.

Frustration with the outcomes of certain zoning variance requests led some members of the community to form a second RCO as they felt their voices were not being heard by EFFC’s leadership. 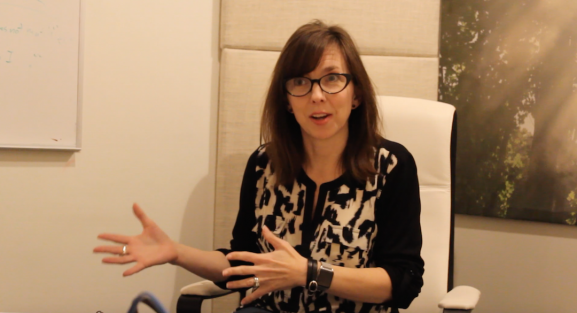 “My experience was not easy,” said Felicite Moorman (above), the current president of EFF and a five-year resident of East Falls. “Zoning in Philadelphia is not easy, and so East Falls Forward came about when some neighbors found the process in East Falls to be more onerous than it had to be.”

Zoning is hot topic in East Falls because, along with frustrations surrounding traffic and parking, many residents are frustrated with the number of empty buildings along Ridge Avenue and feel it could thrive with business were they occupied. While East Falls is one of the least densely-populated neighborhoods in Philadelphia, many residents have an interest in zoning issues and regularly attend the EFCC’s zoning committee meetings. 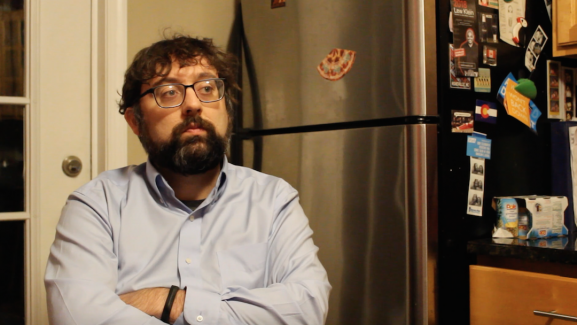 “I would say parking and traffic is generally a major concern,” said Chris Rooney (above), a four-year resident of East Falls who serves on EFCC’s zoning committee. “Some people are more pro-density, subscribe to a more urbanist outlook that values higher density uses, and there are other people in the neighborhood that like the current density and do not want to see any increased density.”

Moorman said she grew frustrated with EFCC and the zoning process when she was moving to East Falls. She needed to obtain a loan to renovate a home along Ridge Avenue, where she planned to move her family. The loan stipulated she would need to be able to generate income from the property if necessary, which required a zoning variance. When she applied to EFCC for the variance, it was denied. Moorman felt the process was not transparent and did not understand why the request was turned down.

“When I first came in, there were a lot of very vocal people,” she said. “They were members of the Community Council, but not necessarily leadership, who were just really driving this closed door process. So behind closed doors, 10 or so people would vote on whether or not you get your variance. You don’t know what happens back there.”

Bill Epstein, the current president of EFCC, denied the voting process was not transparent.

“I don’t remember the Community Council doing anything that was not transparent,” Epstein said.

Chris Rooney agreed, though he said he could only speak about the last four years he has been a part of EFCC.

“As far as I’m concerned, the Community Council operates pretty transparently, but people who have lived here for decades have all sorts of stories about the way things used to be,” he said. “I guess I just haven’t been around long enough to comment in detail on those. I will just say that the Community Council is a group of volunteers who are just trying to do their best for the community. Nobody’s perfect, but everyone’s trying their best.” 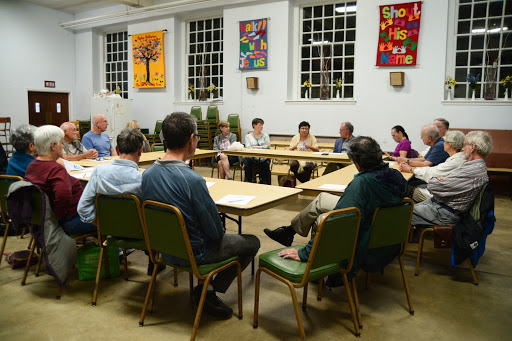 Still, Moorman said aside from a perceived lack of decision-making transparency, negativity and antagonism prevailed in EFCC meetings (above) for a long time, which eventually led to a group of individuals breaking off to form EFF in response.

“I saw a couple of people not treated well at meetings,” she said. “There was a meeting where I went and presented a coed scouting troop and I was met with unabashed anger. And I simply couldn’t place it. I had no idea why.”

Sullivan and Fillmore (pictured below) started to record EFCC proceedings, as well as passive-aggressive encounters with leadership, on film and posted those on Facebook to make the content of the meetings more accessible to the general public, as well as raise awareness of the tensions between EFCC and certain residents who felt they were not heard.

“I would never imagine a zoning meeting would be what people want to read about,” Sullivan said. “But you know why? Nobody wants to go.”

Before launching the paper, they created a blog about Moorman’s house renovation process, documenting the history and evolution of the house. Eventually, when Sullivan began collecting more human interest stories from around the community and recording community council meetings, the two started East Falls Local, both an online and print newspaper. 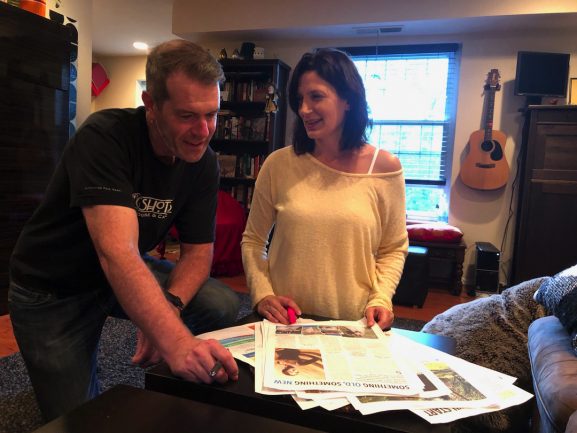 Eventually, Fillmore was elected secretary of EFF in a second round of elections.

“The Community Council was, like, yelling at people in meetings and people were really stressed out about it,” Sullivan said. “And the newer people weren’t feeling they were heard.”

In order to help those who felt as if they were not being heard because they were new to EFCC meetings, Sullivan began posting their comments online as well as talking to them and arranging meetings with Gina Snyder, the executive director of East Falls Development Corporation at the time.

Before East Falls Local began publishing, a more traditional, privately published local paper called The Fallser served as the community paper. When the editor, Julie Camburn, retired in 2015, East Falls Local went into print. Before that, Sullivan said, they held off because they did not want to create unnecessary competition.

Two and a half years later, EFCC brought back The Fallser under a different name: East Falls Now.

“In fact, the community very much missed The Fallser,” Epstein said. “It was founded as a central point for discussion and for news, for news of the organizations in the community, for a calendar. And we decided it was necessary that we print it, so we came up with the name East Falls Now.”

Though their styles, voice and coverage could not be more different, Moorman and Sullivan took the decision by the EFCC to circulate another monthly print paper as an antagonistic act toward the East Falls Local, a small business.

“Then just recently, a significant period of time since East Falls Local was established and had been serving the community … a new newspaper gets formed,” Moorman said. “I may have shared my disdain, and I think that definitely impacted our relationship. We haven’t had friendly words in a while.”

Epstein said the formation of the new newspaper was strictly a response to The Fallser closing in 2015.

However, Moorman said Epstein himself was a key figure in helping her secure the loan she needed to renovate her home in 2014.

“I will say, 100 percent, I would not have my house without Bill Epstein working hard and helping me through the variance process,” she said. “I have been a huge fan of his until the newspaper, and that just kind of broke my heart because my friends are the small business owners who have the other paper. I just don’t get it.”

Both organizations said there are no controversial zoning issues being considered at the time, and the relationship between the RCOs and their loosely-affiliated newspapers has been relatively peaceful lately.

“I would say that the current leadership of East Falls Community Council is very welcoming,” Moorman said. “And frankly we worked together with the East Falls Community Council for the last 18 months, maybe even two years, fairly well. We haven’t had anything ridiculously onerous come between us. I think that their current leadership is very progressive, trying to be more transparent and trying to cooperate with multiple organizations.” 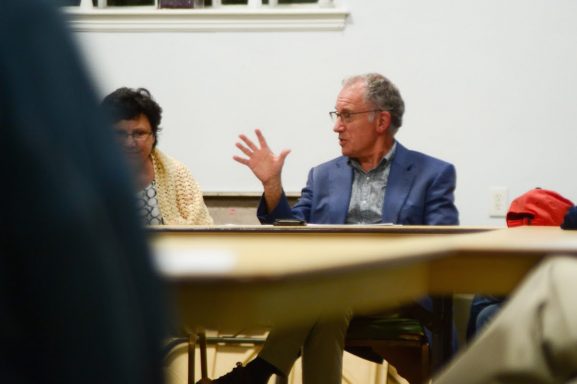 Epstein (above) said the peaceful climate likely stems from a lack of pertinent issues in the community, as fewer people are attending meetings to voice their opinions.

“People are more likely to come out to meetings when they’re angry about something, or they disagree and they wanna complain,” he said. “I don’t mean that in a negative way, but people come out to meetings to complain and voice their opinions. And I think they have a right to do that.”

While he declined to comment on EFF, Epstein said any effort to improve the community is welcome.

https://vimeo.com/40912126] The development of Philadelphia seems to be well underway under the careful guidance of the Philadelphia City Planning Commission. Despite the many changes that have occurred in Hunting Park, the commission has a lot [continue reading…]

The Cunningham Piano Company donated a digital organ for the Papal services that concluded yesterday with Pope Francis leading a mass on the Benjamin Franklin Parkway.  “I’m a musician, and, of course, I’m a business [continue reading…]