The students of Emlen Elementary School were hard at work on Nov. 15 at tables cluttered with art supplies like fabric, glue, and colored pencils. They finished their latest masterpieces with the help of the art teachers from Mt. Airy Art Garage.

The student artists weren’t just enjoying any regular Friday afternoon art class. These fourth and fifth graders are part of the Community of Pride Mural & Literacy Project (COP), a collaborative project between Emlen Elementary and Mt. Airy Art Garage (MAAG). The goal of the project is to bring art and literacy enrichment into Emlen Elementary via a yearlong art project that culminates in a permanent mural at the school. 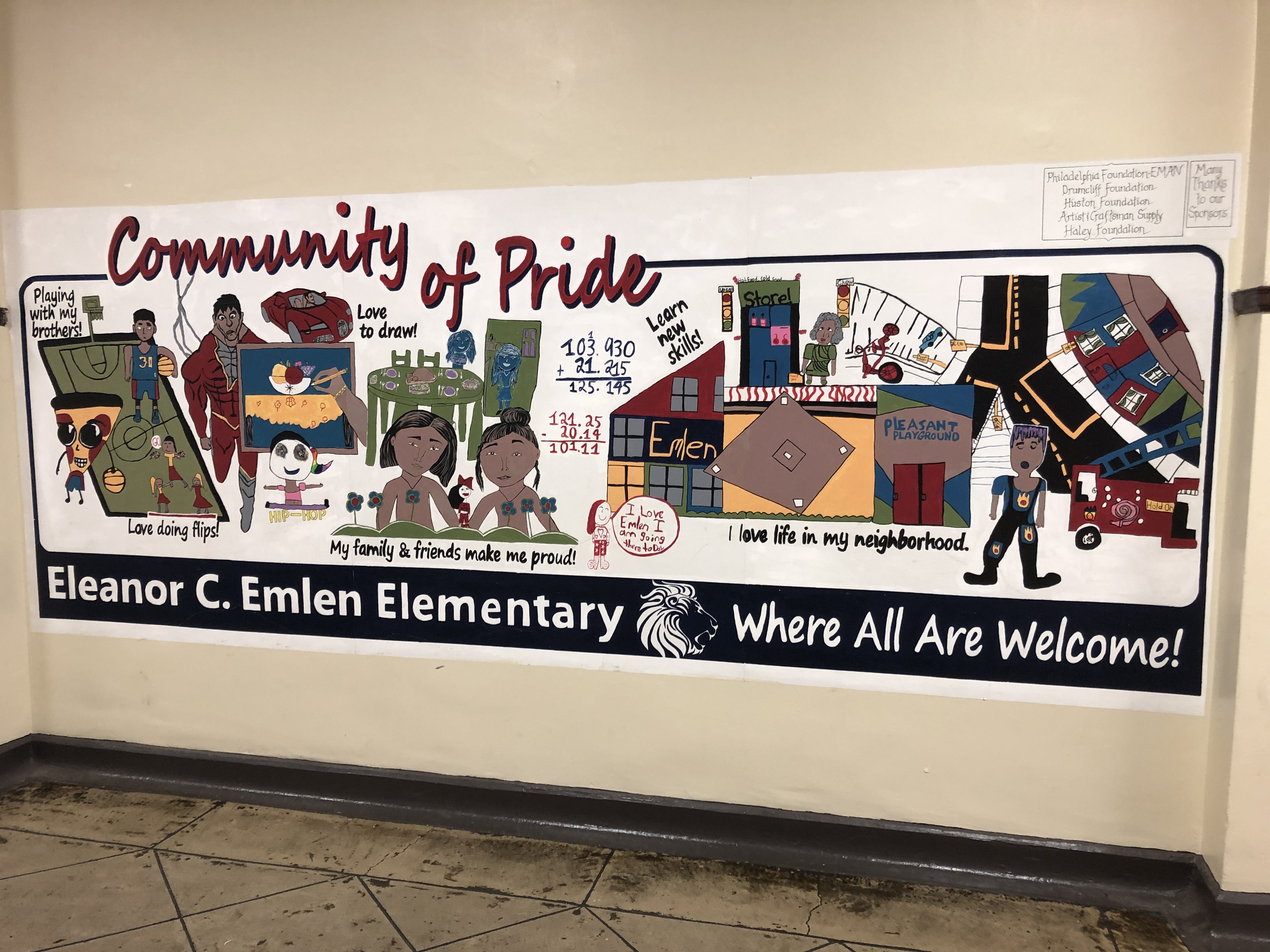 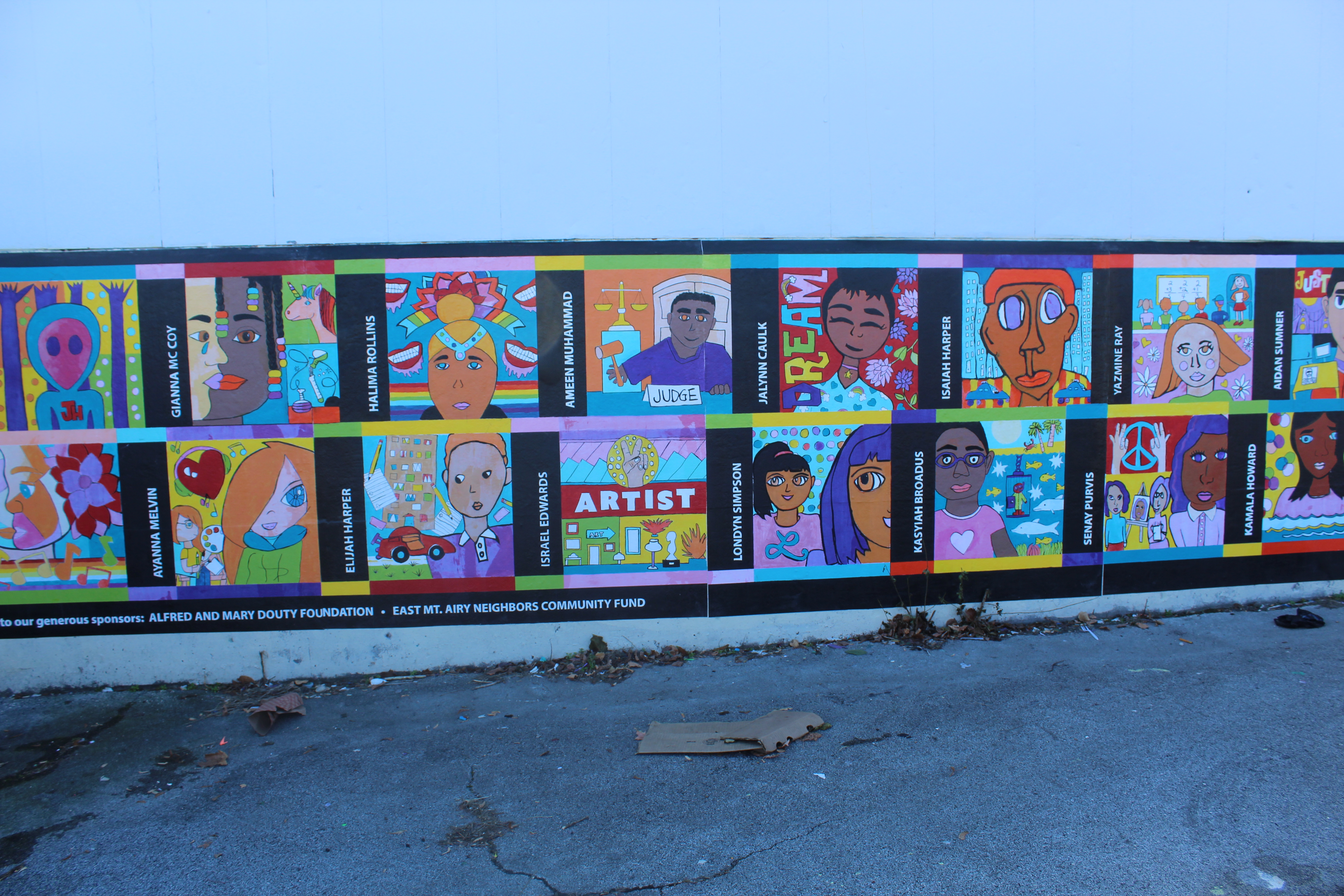 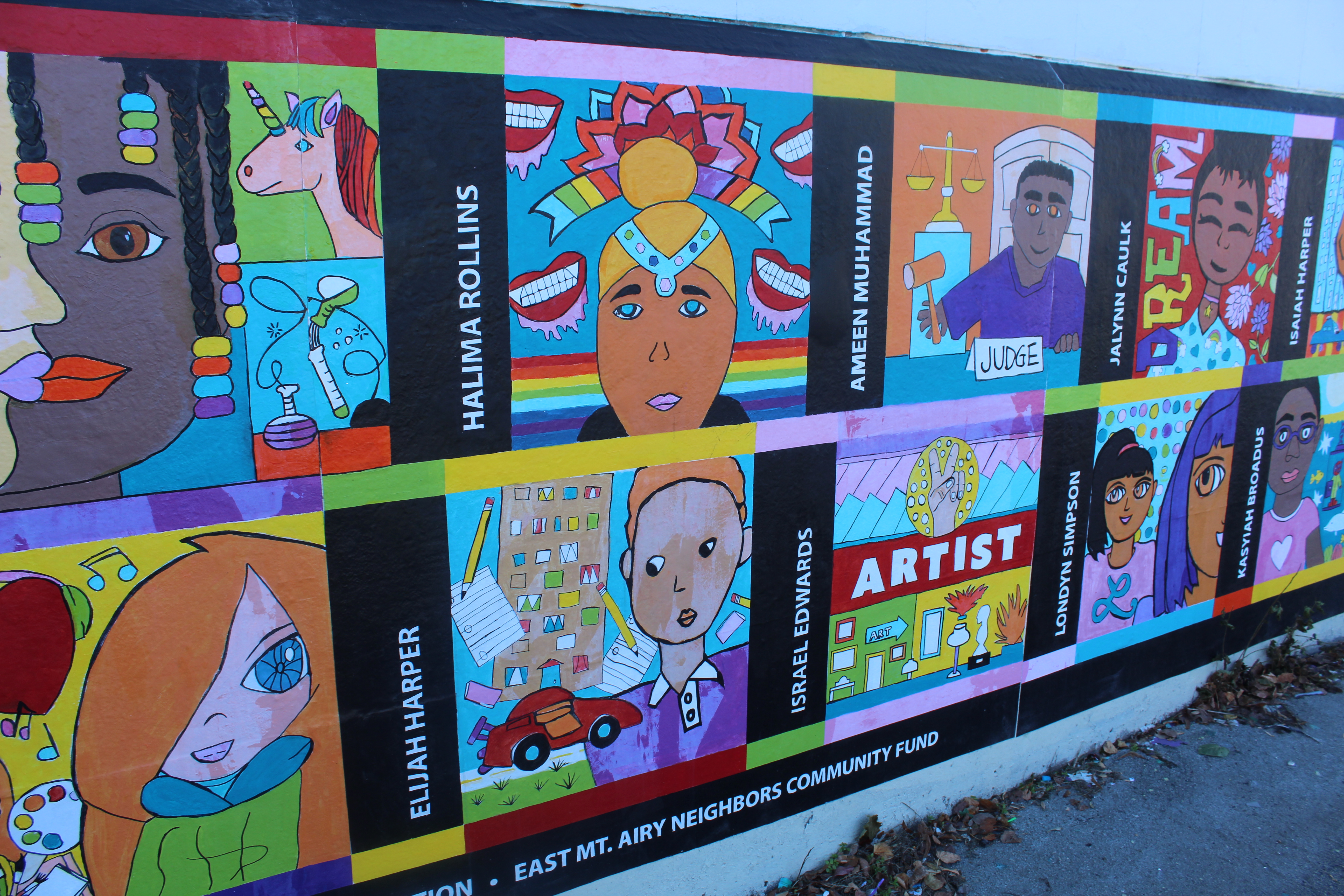 MAAG and Emlen students collaborated on their first mural during the 2016-2017 school year. It sits outside the art room on the second floor and responds to the question, “What makes you proud?” This year’s mural will be located outside the building that houses the lunchroom, next to last year’s mural.

“We build a whole experience for them around creativity,” said Arleen Olshan, one of the founders and executive director of MAAG. “Their own creativity and the creativity of other outstanding African American artists.”

Each school year a theme is picked for the new mural. This year’s mural project is a “Window into our World,” a collage-style mural following the art style of Romare Bearden. Students produce individual panels for the mural, which are then collected as a final piece.

Finishing the mural each year brings immense satisfaction to both Emlen’s student body generally and the individual COP students, according to Kathy Robinson, a MAAG member, artist, and lead teacher in COP. She said It’s seen not only as the culmination of hard work from those involved in the mural project, but as an incentive for the younger students.

“The kids have a lot of pride in the mural,” Robinson said. “During the year, some of the younger students will peek in and say they really want to be a part. They have to, kind of, earn it with behavior before they’re picked to be in this program.”

Literature and poetry that has to do with the mural’s theme is also a part of the COP curriculum with MAAG teachers incorporating a book with each of the sessions they do with the students.

Jacob Ruley, a student involved in COP worked diligently on his latest collage project during class, while also assisting other students.

“I like the creativity,” said Ruley, while putting finishing touches on his piece. “I like to be creative. I try to close my eyes and look to see what I can find to make my art more interesting. It’s great being an artist. I can go into my own world and reach the stars. I can reach to what my dreams are in art.”

Giving students an opportunity to express their creativity and pursue their dreams are often supported through the work of local nonprofits.

MAAG grew the partnership with Emlen Elementary after moving from a nearly 5,000 square-foot space into their current space, a 650 square-foot storefront on Germantown Avenue, in 2016. The current space does not have studios or classrooms, so the Art Garage does not host the classes or workshops they used to.

According to Olshan, the move in 2016 was hard, but they didn’t lose from it. Instead, it pushed the organization out into the community more, leading to new partnerships like COP.

“We strengthened our base, essentially,” said Olshan. “We’ve created relationships in this neighborhood, you know, where we have patrons that come in here now and they’re still discovering us.”

As a nonprofit organization for artists, MAAG focuses on programs that help build the community, like COP and the After School Community Arts Project at the Mt. Airy Playground.

Its story began a decade ago.

“In 2009, we put up flyers at the [Weaver’s Way] food co-op and said, you know, ‘We’re interested in founding an art’s organization,’” Olshan said. “The food co-op shared their space so we could have these meetings. Hundreds of people showed up.”

MAAG started out in a garage provided by Weaver’s Way and later moved to their first location at 11 W. Mt. Airy Ave., a large remodeled office building that now houses a karate studio. In 2016, MAAG had to move to a smaller space at 6622 Germantown Ave., which serves as their gallery and gift shop.

In its Mt. Airy Avenue space, MAAG offered classes and workshops in a building they renovated to suit their needs. They also had space for exhibits and the Solomon Levy Gallery, which was dedicated to Solomon Levy, MAAG’s late vice president and a founding board member.

At the beginning of 2020, MAAG plans on moving to a new, bigger space at 7054 Germantown Ave., which used to house the Mt. Airy Custom Furniture workshop and studio. The building was recently purchased with MAAG in mind by one of the organization’s patrons, who wishes to remain anonymous, and who will be leasing the space to MAAG for the next decade.

The new location will allow MAAG to do more than ever before, she said. There will be several studio spaces to be rented out and exhibition space. Additionally, the new space will have a gallery, a demonstration area, and a larger space complete with a kitchen to rent out for community events.

MAAG may be entering its second decade, but COP has only been around for four school years. The program has gained support from the school administration and local organizations, like East Mount Airy Neighbors (EMAN).

EMAN president, Tonyelle Cook-Artis acknowledged the impact COP has had on the neighborhood.

“The Mt. Airy Art Garage is ensuring that our youth can carve their little foot and handprints in showing the importance of the arts in our community and the city of Philadelphia,” Cook-Artis said.

Kathy Robinson said she understands the importance of introducing children to art because she became involved with art at a young age, too.

“I feel like art is one of the most important things, teaching them to think in so many different ways,” she said. “I know when I was growing up, art saved me. That’s just what I was drawn to. Just being able to draw quietly by myself was a really good thing to have.”

Fourth grade twin sisters, Kamiyah and Kamorah Ali have been painting, drawing, and sculpting since they were toddlers. They are thrilled to be part of COP.

“I’m addicted to art,” Kamiyah said. “I’ve been doing art since I was three.”

Kamorah agreed, while she showing off her collage project, as well as an artistic rendering of the Philadelphia skyline.

“Art is my favorite thing to do,” Kamorah said. “I love art because you can be free with it, but it takes a lot of focus and practice.”

Fifth-grader Arianna Ellerbe, another COP participant, is excited at the prospect of seeing her artwork on the outside of the school in the years to come.

“I want people to know that I did that,” Arianna said. “Like, I actually did this for a few months to have something up on there.”

Once the mural project is finished at Emlen, the students will have the opportunity to participate in an art show at Lovett Memorial Library.

“We sell the kids drawings and they make the money,” Olshan said.

For MAAG members, the show is also an important moment marking the impact they may have had in a child’s life.

“To read their statements is really wonderful, too, because they’ll say, ‘I first became an artist at Emlen Elementary School,’” Olshan said. “It’s empowering to have your expression respected and appreciated.”

Philadelphia City Councilman-At-Large Dennis O’Brien was taught at a young age by his grandfather the inherent value of giving back to the community. Years later, O’Brien is doing just that with the Northeast Philadelphia Youth [Read More]

South Philadelphia: Music in the Classroom

It’s the eighth largest district in the country and one of the two poorest. Despite tying with urban Chicago school districts for the most financially disadvantaged, The School District of Philadelphia (SDP) remains one of [Read More]