Everyone knows that Philadelphia as a city full of American history. Although it also has a rich and important history with the LGBTQIA community, Philadelphia is often overshadowed in that respect by such cities as San Francisco and New York.

In preparation for LGBT History Month in October, Philadelphia Neighborhoods worked with Bob Skiba, the archivist at the William Way Center’s John J. Wilcox Jr. LGBT Archives, to put together a list of five important moments in Philadelphia’s LGBTQIA history.

We know the term ‘sit-in’ as just one aspect of the Civil Rights Movement of the 1960s. In Philadelphia, four years before Stonewall, a different sit-in took place.

Dewey’s was, at the time, a chain of coffeeshops across the city. The 13th Street Dewey’s, open all night, was known as “the fag Dewey’s,” where queer customers mingled with cops needing coffee, a cross-section of life on 13th Street.

The other Dewey’s, however, were determined not to follow suit. The 17th Street Dewey’s, just off Rittenhouse Square (today the site is known as Little Pete’s, shown above) was open about refusing gay customers and those wearing non-conformist clothing, which is to say non-gender-conforming clothing. More than 150 people – black, white, gay, lesbian and transgender – took part in the first protest on Sunday, April 25. Three protesters were arrested.

The Janus Society, a local gay-rights group, spread leaflets in support, and a second sit-in occurred on Sunday, May 2.

The establishment, in the end, agreed to end their discrimination. 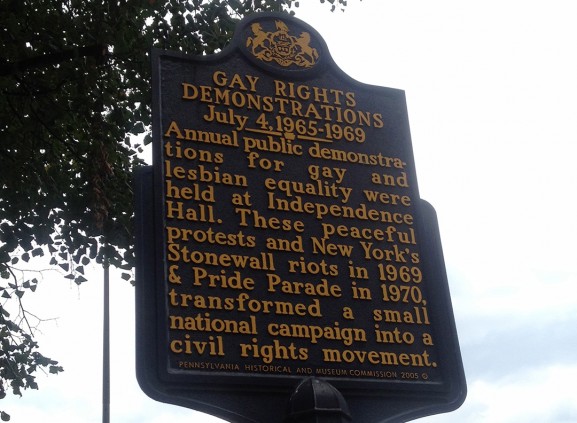 Four years before the Stonewall Inn riots in 1969, which is said to have sparked the beginning of the gay rights movement, a few dozen protesters peacefully picketed in front of Independence Hall in one of the earliest LGBT demonstrations in the United States.

They called their demonstration the Reminder Day demonstrations to “remind the American public that homosexuals did not enjoy many of the rights that were protected in our Constitution,” according to Skiba.

Protesters returned to Independence Hall every 4th of July through 1969. The demonstration moved to New York in 1970, where it became America’s first gay pride parade. 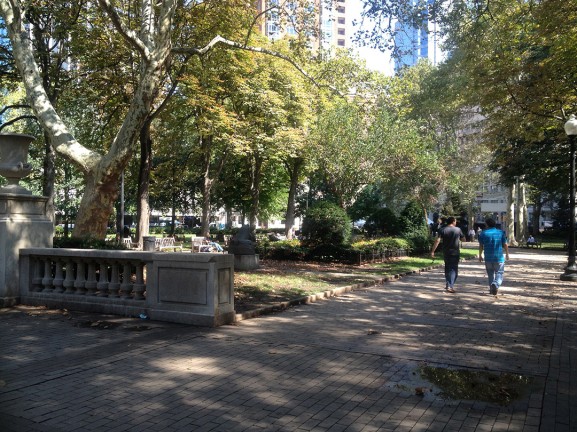 Two years after the Reminder Day protesters relocated their activities to New York to join in the first American gay pride parade, they returned to Philadelphia. Groups including the Gay Activists Alliance, Radicalesbians and the Homophile Action League started the Gay Rights Committee.

On June 11, 1972, they gathered around a stage in Rittenhouse Square (shown above) to listen and cheer on activist Barbara Gittings as she spoke on in the injustices faced by the gay community. Other speakers followed, before the group turned and marched toward Independence Hall. The mood was different, relaxed and filled with music, dance and cheers as they intentionally took themselves right where the Reminder Day protesters had stood. 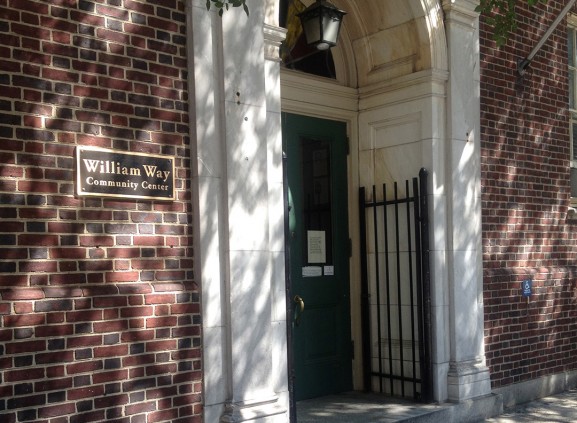 Two years of planning, raising money and volunteer working went into the opening of the new loaction of the Gay Community Center of Philadelphia. On 325 Kater Street, visitors found a warehouse turned into a place where French doors opened out onto the street, a second-floor ‘Gay Coffeehouse’ and space for various events. Over the next five years, this building was a center of Philadelphian counter-culture, hosting performances, meeting groups, art exhibits, a library and more.

The facility, now known as the William Way Center, moved in 1981 – and three more times after that, ultimately landing near 13th and Spruce streets. 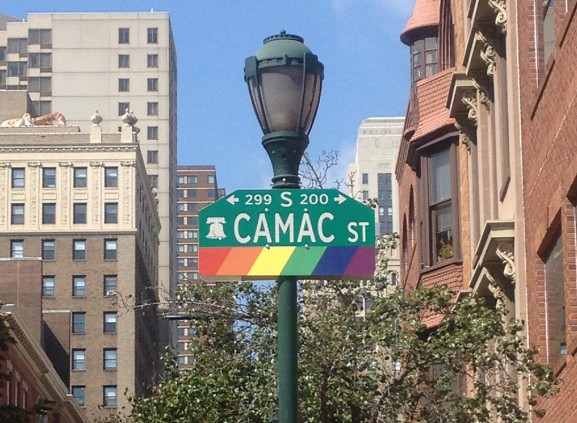 For queer Philadelphians who have come of age within the last few years, the rainbow markers that adorn the street signs from Chestnut to Pine and 11th to Broad streets are a normal sight to see. Older members of Philadelphia’s LGBT community, however, understand the significance of the additions that officially transformed Washington Square West into the Gayborhood.

“Not only does this bring a sense of welcoming to the local community, it’s a symbol to the world,” said then-President of the Philadelphia Gay Tourism Caucus, Tami Sortman, when the signs were introduced in 2007.

– Text and images by Kate Kendall and Sara Patterson.

City of Brotherly Love Softball League (CBLSL) is one of Philadelphia’s largest and oldest LGBTQ sports organizations. The league was created in 1981 by J.J. Hendley as an outlet for LGBTQ individuals who wanted both […]

Imagine the fear, frustration and mistrust you might feel upon being called ma’am when you’d clearly rather be called sir – or vice versa. This is the struggle transgender people of Philadelphia have been fighting. […]

Chris Bartlett has been involved in the LGBTQIA community for more than 20 years. His career began with SafeGuards Gay Men’s Health Project in the early 90s. Bartlett was inspired by the work he saw […]