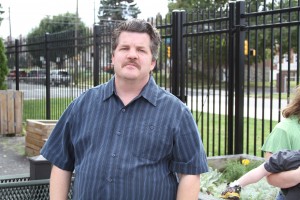 For months, residents and leaders of Mayfair and other communities in Northeast Philadelphia have been fighting for a split of the 15th Police District. Mayfair residents, like John Farrell (right), expressed their concern about the lack of police in the area. Instead of a split, the district received 30 new police officers. In the absence of police presence, frustrated residents decided it was time to take matters into their own hands. The Mayfair Town Watch was organized to help deter criminal activity in the neighborhood.

Anna Stacey (above), now president of the organization, was part of the initial group of neighbors to form the Mayfair Town Watch. She says she has already seen some improvements in the community with the addition of the offers. But thinks it is still important that the Town Watch remain active and visible.

The most recent initiative to get residents involved is the Dog Walker Watch program.

“Aside from having certified members of Town Watch, we wanted to come up with something that would get people involved on a different level,” said Stacey. 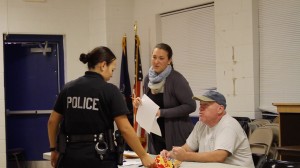 The Dog Walker Watch is joint effort between the Mayfair Town Watch and the Tacony Holmesburg Town Watch. Volunteers attended a Mayfair Town Watch meeting, above, where Anna Stacey explained the Dog Walker Watch program and answered questions. The program was introduced in September with training sessions beginning in early October. Stacey describes the program as a way to engage people who walk their dogs everyday and encourage them observe what goes on in the community. Volunteers must attend a one-hour training session with Stacey and a 15th District police officer (left). The training will cover what to look for, how to recognize suspicious behavior and how to report it.

“We will also teach volunteers how to call 911 and what to say to a dispatcher,” said Stacey. “Most people think they know what to do until they are in an actual emergency.”

Milt Martelack is a Mayfair Town Watch member and a former president of the organization. He fully supports the program and hopes people will participate.

“I reach out to people in the community to encourage them to get involved,” said Martelack. “If there are enough people that step up and do positive things, we can extinguish the negativity and the criminals that want to come into our neighborhood to do bad things.”

Joe DeFelice has a mission. The chairman of the Mayfair Community Development Corporation is using a weekly farmers’ market in the heart of Mayfair to kickstart that mission. The market will be running every Sunday […]

The Fox Chase Town Watch started in early 1995, but has gone through many changes through the years. The Town Watch began as a Friday and Saturday night patrol group. Stephen Phillips, president of the […]