Ruthanne Madway, executive director of the Mayfair Community Development Corporation, and Dan Hoffman, an urban planning consultant, have worked closely with Mayfair leaders to devise a strategy for reviving Frankford Avenue, or The Avenue, it is commonly referred. A conversation about how to improve Frankford Avenue cannot occur without talking about what’s perceived to be wrong with it.

“A remarkable number of people grew up here and have remained here,” said Madway. “They are very loyal, but it also makes people reflect on what isn’t.”

Residents say they want more quality and diverse businesses. The Mayfair Business Association and the Mayfair Community Development Corporation hold regular meetings and host events throughout the year in hopes of attracting businesses.

History is repeating itself. This is not the first time Mayfair leaders have rallied together for a similar cause.

In 1937, Herb Shulman released “It Happened in Mayfair,” a promotional film intended to attract new businesses to the newly developed community. The cast was comprised of business owners and residents moving about the community, highlighting the amenities of the area. Working as manager of the Mayfair Theater, Shulman was a member of the Mayfair Business Men’s Association and dedicated the film to “a finer and better Mayfair.”

Lifelong residents talk about wanting The Avenue to return to the way it used to be, but no one can agree on exactly what that means. Ask any Mayfair resident, on any given day, what period of time Frankford Avenue was at it’s best and you’ll likely get a different answer. Hoffman says it’s the nature of people to believe that their memories of a place or time will always be better than any other.

“On that, I recommend you go back and see the old movie ‘Atlantic City,’” said Hoffman.

Further research on the subject suggests that present-day Mayfair is not much different than the past. Mayfair was incorporated in the early 1930s, making it the youngest community in the Northeast. Mayfair’s flagship intersection, Frankford and Cottman avenues, was as vital to the area as it is today.

“Mayfair is especially interesting to me because this is both a pre-war and post-war sort of suburb of the city in some ways,” said Madway. “It’s still bears the template and the imprint of traditional 1920s town planning because that was when it was originally laid out. A good portion of the buildings on Frankford Avenue are of that period.”

In fact, census data estimates more than 80 percent of the homes in Mayfair were built prior to 1950. By the late 1940s, Mayfair was a fully developed community. Frankford Avenue was lined with grocery markets, florists, bakeries, restaurants and theaters.

Establishments like the Mayfair Diner and the Devon Theater were open for business. Residents could go to Stein for flowers or pick up a cake from Holmesburg Bakery. Like most communities, small, family owned businesses were at the center of commerce.

Many of the businesses that were on Frankford Avenue during the early periods of development are still around today. According to the U.S. Census Bureau, small businesses (fewer than five employees) made up 54 percent of the 584 Mayfair businesses in 2012.

Pat’s Music Center, at Frankford and Cottman avenues, has been open for more than 30 years. Owner Bob Domanico says the only change he’s noticed is the types of businesses and the addition of major chain stores.

“I think The Avenue, even though has changed, is still a great place for business,” said Domanico. “A lot of the family businesses that were open when we started are still here.” 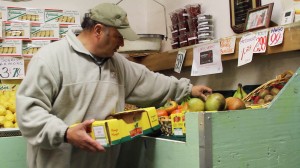 Mark Capriotti (right) and his bother own Capriotti Brothers Fruit and Produce. They are the third generation to run the produce market that opened its Mayfair location in 1968 at Frankford Avenue near Friendship Street. Capriotti spent much of his childhood on Frankford Avenue.

He remembers sidewalks full of people walking in and out of shops along The Avenue.

“My dad chose this spot for the foot traffic,” said Capriotti. “There was always foot traffic.”

In working with the CDC, Madway spends a lot of time walking Frankford Avenue, talking to business owners. She does not own a car so she walks almost everywhere.

“Frankford Avenue is in many ways the lifeblood of the neighborhood because, whether or not people drive or walk, this is still a walking neighborhood,” said Madway.

Hoffman wants to understand the residents’ view of Mayfair today, which is a stark contrast to 1950. He’s not so sure things are all that different.

“When you unpack it and realize what they’re actually remembering, it’s that they liked to walk around that there was a variety of stuff to buy in the stores,” said Hoffman. “And those bones are still here today.”

At first glance, the interior of The Camouflage Rhino looks and feels just like any other thrift store you may have visited. Racks of clothing, second-hand furniture and various used appliances fill the sales floor. [continue reading…]

Joe DeFelice is a true Mayfair man. Living in the city his entire life, DeFelice moved back to the neighborhood after graduating from La Salle University and began his role as a community leader. Even [continue reading…]