Anyone who knows Philadelphia artist Isaiah Zagar will tell you that he is a storyteller at heart. His stories are told through the jagged and shimmering pieces of tile, glass and what some would consider garbage that he has arranged into large-scale mosaic masterpieces. For those who don’t know Zagar personally, they are likely to have seen his work. They can be found on over 200 public walls throughout the city and beyond – having recently finished the San Luis Potosi Mural Project in Mexico. His largest installation to-date is the eye-catching, Philadelphia’s Magic Gardens on South Street. 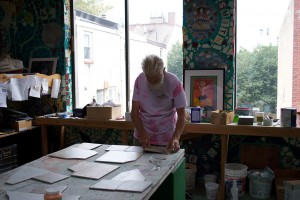 During the 1970s, Zagar was part of a group of artists and young entrepreneurs working out of South Street. Together, during a time that would be known as the South Street Renaissance, they strived to breathe life into what had become a dismal area in Philadelphia. For Isaiah, that meant the beginnings of his unique way of visual storytelling.

The now 75-year-old artist attended the Pratt Institute in Brooklyn, New York as a teenager where he received his B.F.A in painting and graphics. In the mid-1960s, Zagar, along with his wife Julia, spent three years in Peru volunteering for the Peace Corps. It was there that Zagar’s artistic and spiritual journey began to truly unfold.

While in Peru, Isaiah was fascinated by the tradition of folk art and its artists. When he and his wife had moved back to South Street in 1968, Zagar, who had a long history of struggling with undiagnosed bipolar disorder, suffered a crippling nervous breakdown.

“He was hospitalized and actually attempted sƒuicide. And as a result of that he started [to make mosaics] and it was like a kind of therapy for him,” said Olivia Edlund, the education and outreach manager at PMG. 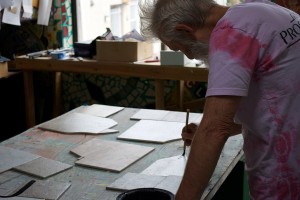 “It’s what brought him out of his depression,” she said.

Aligned with his spiritual beliefs, Zagar was determined to use this moment in his life as a springboard into new growth. The mosaics served as a vehicle for that discovery.

Zagar has spiritual revelations when working. He doesn’t align with any one form of religious dogma or political diatribe, but he has witnessed various forms of spirituality and has applied them to his work and his overall life experience.

“He is a very spirited person, but he’s not into any religion and he doesn’t believe in any Santa Claus or God even. He just believes in the present moment,” his son Ezekiel said.

That fluid sense of spirituality is something that comes out in many of the images in his mosaics.

The Eye’s Gallery, also located on South Street and run by his wife, is the home to some of Zagar’s earliest mosaic works. When he began to mosaic the building that in now PMG, he was met with a mix of public opinions. But Zagar took the criticism as best he could. A strong belief that what he was doing was important to the art world and to Philadelphia gave Zagar the strength to continue on. 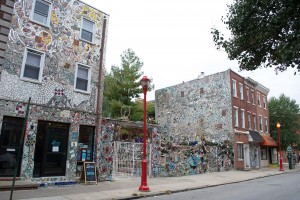 “People can get very offended by what I do, too. Its been called visual pollution. I like that term,” Zagar said.

In much of his work, one can see the people the Zagar has chosen to immortalize woven alongside depictions of animals and winding shapes.

“Most of the mosaic work I see today is very conventional. It might tell a story, but it’s a story that you already knew. Isaiah’s work tells you a story you didn’t know,” said Rick Snyderman, who co-owns Snyderman-Works Galleries in Old City with his wife and are both long-time friends of Zagar. 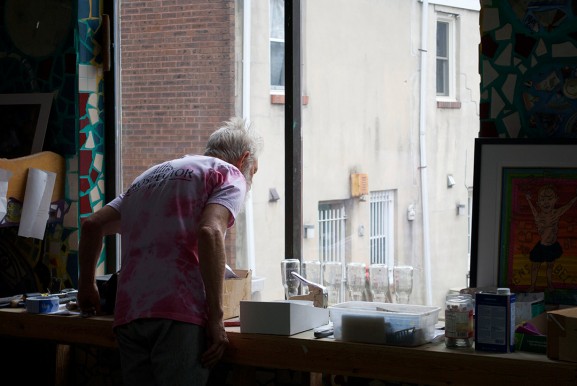 When Zagar is crafting his pieces, he is unequivocally occupied in his mind. When using his hands to position tiles or paint, no distraction is worth his focus. He is utterly devoted to making his work stand out on the streets both by means of their size and their content.

“It’s definitely an interruption from what is normal or what people think or expect to be there. It always stops people in their tracks. I think it fires up peoples’ imaginations for what is possible,” friend and artist Warren Muller said.

Having spent more than 40 years creating artwork and experiencing some of the 20th century’s most turbulent times, Zagar has honed a wealth of knowledge. He has also been a part of the South Street community for almost half a century. He has watched the neighborhood change from decade to decade and can safely say that he was part of that change. He has been and is an integral part of the community and the community has been an equally important part of him and of his art.

Executive Director of Philadelphia’s Magic Gardens Emily Smith, who has worked with Zagar through PMG for the since 2009, said she believes the community has a profound impact on Zagar’s work. He often will put characters from his neighborhood into the mosaics directly and tell their stories or their narratives, she said.

Zagar is, no doubt, an artistic pillar of the South Street community. Whenever he walks casually to Whole Foods for lunch or to PMG to work in his studio, passersby usually nod or say hello. They do it out of respect. Zagar has made the streets of South Philadelphia his own personal canvas. His own public diary. He has created his own world of mosaics. The center of his own artistic vision to share with the world and with the people he loves. 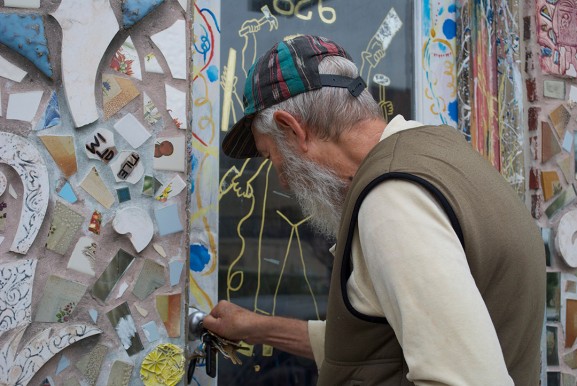 He is humbled by his experiences, but feels that there is still much more to learn.

“I went through a long period of apprenticeship,” Zagar said. “I don’t know if that apprenticeship is over. I might still be going through it.”

For Steven Kotridis, the food industry has always been a huge part of his life, so purchasing and preserving Dalessandro’s was something that has meant a lot to him. The original shop was opened in 1961 by William […]

Folk music is alive and well in what Chestnut Hill residents consider a special venue. The Mermaid Inn, built in 1734, embodies the area’s characteristics: art, history and acceptance. A collection of musicians, known as […]

[vimeo 40894978 width=575 height=450] The miserable wet and cold did all it could to dampen the spirits of the Philly Tree Tenders as they attempted last weekend to spread green around Port Richmond. The spreading of […]