The visually stunning windows of Sophy Curson on the corner of 19th and Sansom streets stand out in the sea of industrial and vintage-looking storefronts. The slanted tile roof and floor to ceiling windows are inviting and intriguing – much like store itself. 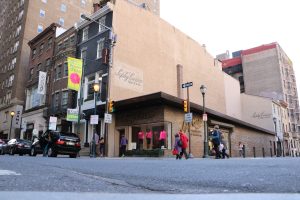 Sophy Curson has been in business since 1929. According to family lore, Curson’s father, who was in the fashion business, was uncertain about his daughter’s ability to follow in his footsteps. Curson was a unique individual who thought for herself and had an innovative mind.

She was a small woman, and did not fit into the average adult clothing found in stores. She decided to make clothes that fit her small frame, and this creative risk impressed her father. The sizing label “juniors” was born, which has since morphed into what is commonly known as “petites”.

Curson continued to work at the store, and was fortunate to have ownership of the building, unlike many other boutiques and stores that have monthly rent to pay. The unique property was an old parking lot that was turned into the beautiful Tuscan-style store that it is today. 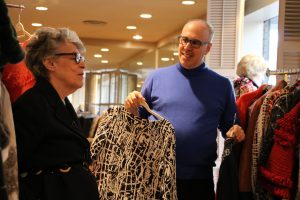 “It was a mistake. Working here was a mistake,” Schwartz said. “My mother and her sister (Sophy) were working here – I never was asked to come here to work. They said, ‘You don’t want to do it, it’s a horrible job, you’re not cut out for this.’”

Schwartz was waiting on a job at the fashion magazine Harper’s Bazaar, whose headquarters were up in New York. While she waited, she ended up getting a bit of experience working in the family’s boutique.

“I learned how to look at clothes in a different way,” Schwartz said. “I got the job (in New York) because the people who hired me wanted someone who had market experience.”

Schwartz spoke about having joined her mother on trips to New York to buy for the store. She credited many of these trips with her ever-evolving knowledge of the business and buying techniques.

Schwartz commuted to New York during the week for work at the magazine, coming home on weekends to Philadelphia, where she met a young doctor who worked at the Children’s Hospital. It wasn’t long before the young man proposed, but he had a major request: He asked that she no longer commute to New York anymore. This demand brought Schwartz back to Philadelphia full time. 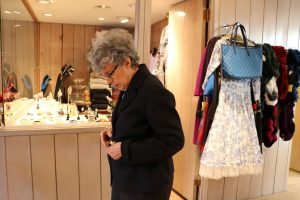 “I got married and went straight to the Mojave desert” said Schwartz.

That’s where her new husband’s government ties took him, and she followed. When she returned two years later she had two sons, Charlie and David. The children seem to have taken after both of their parents. Charlie works as a pediatrician, just like his father. David is now Schwartz’s partner.

“I love working with my son,” Schwartz said.

David has become an integral part of the buying process – although he said his mother usually gets what she wants, even if he disagrees.

Schwartz is a force to be reckoned with in business, but is also a kind and gentle person – beloved by her friends. Julia Somers-Morley is a former employee of the now-defunct Wanamaker’s department store and a former competitor in business; however, through competition Schwartz and Somers-Morley became fast friends. 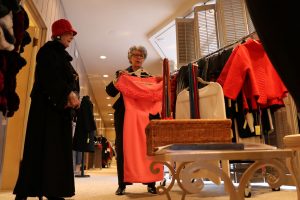 When asked if they’ve learned from each other, Somers-Morley replied, “We do, we did, and we’re still learning!”

Sophy Curson is unusual in the sense that clients often become more like friends. Julie Jensen Bryan is a longtime customer, stating that most of her clothing originates from the boutique.

“Susan and David get the most amazing jackets and dresses from France,” said Bryan. 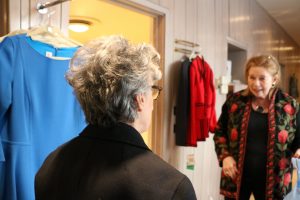 In a sea of stores that only cater to smaller sizes, she said that Sophy Curson stands out. It carries an array of sizes and styles that can fit various body types.

“We’ve become friends over the many years that I’ve been shopping here,” Bryan continued. “Just last week we went to tea.”

The store’s garden furniture and shag carpets are a source of comfort when walking into the show room. There is a sense of peace and a small-town charm, even though Sophy Curson is technically in the middle of a very affluent and busy area.

Somers-Morley could not help but smile while talking about her friend.

“She is unbelievable; she keeps it going,” Somers-Morley said. “She keeps her own business going with her son – and also, she’s a good friend. A wealth of information and a divine, nice, good friend.”

– Text, images and video by Stetson Miller and Lindsay Weiner

Max Ochester, owner of Brewerytown Beats at 27th Street and Girard Avenue, moved to Brewerytown in 2010, a few years before it became the “up-and-coming” neighborhood that it is now. In late 2014, Ochester’s developer friends [Read More]

Mark Squilla represents City Council’s 1st District, a diverse and growing area. The district he is responsible for includes Port Richmond, among other notable stretches of Philadelphia such as, the Delaware River, Chinatown, Center City, Northern [Read More]