“Why not?” she said to her two colleagues at the Samuel S. Fleisher Art Memorial in the Bella Vista neighborhood of South Philadelphia. “There’s already holes in them for you to work with.”

Fernandez has continuously looked for new ways to express herself through art. Lately, she has focused on food.

“It’s weird for me when I try to explain to people what kind of art that I do,” Fernandez said. “I say I’m working with food. They don’t really want to think of that as a visual art, but I do now.”

Besides her work as the manager of children and youth programs at Fleisher, Fernandez volunteers for an art residency in North Philadelphia. Along with other local artists, pictured below, she participates in The Village Table, a project focused on social public art. The project has promoted the issues of food equity by providing for a food desert community. 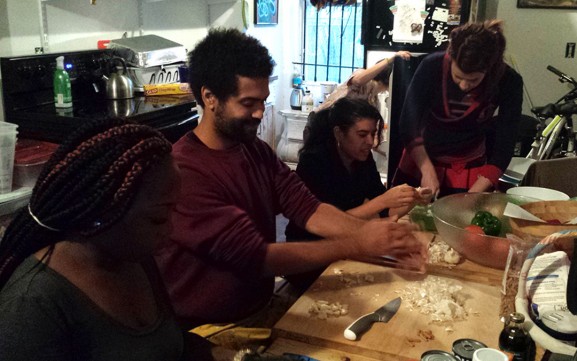 Living and working in South Philadelphia, Fernandez has easy access to supermarkets like Whole Foods and SuperFresh.

“In this community, you have corner stores, Chinese stores and that’s about it,” she said about the neighborhood used for The Village Table.

The Village Table volunteers collected recipes from neighbors to produce a menu, along with a community wide four-course meal focused on the health benefits of certain produce items.

Fernandez urges residents to try new things, whether it was food or art, something that she has taught to the youth at Fleisher as well.

“I love cooking and people that love to cook,” Harris said. “So it was exciting to see her promote learning to love it too.” 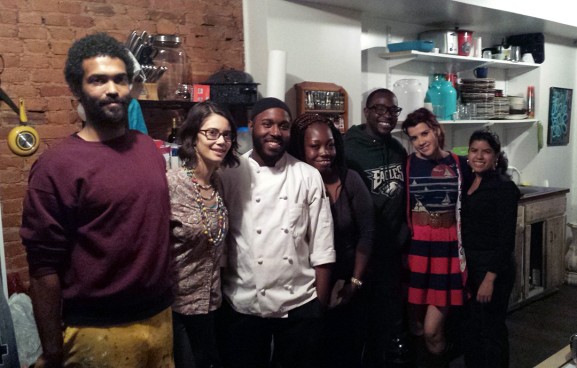 “I usually have one main thing that I’m working on,” she said. “Then there are five other almost secretive side projects at the same time.”

Back at Fleisher, every Saturday five hundred children, ages 5 to 15, arrive for several forms of art classes. The center also provides a lounge where teens are able to socialize and practice art twice a week.

Fernandez has also been managing an in-school program for 15 South Philadelphia schools. Instructors from Fleisher guide teachers on how to integrate visual art into the core curriculum.

Fernandez has established a passion for teaching art and plans to continue spreading her attitude to the youth programs. Her love of teaching was influenced from two international contemporary art experiences.

“I’ve had a really good experience with teaching, and knew it was something I could do forever,” Fernandez said. “But I wanted to see what else was out there, so I went to Barcelona.”

Fernandez enrolled herself in a year-long contemporary art program in Barcelona after feeling the need to open herself up to other forms of art. While in Spain, she discovered fibers, fiber installations and video art. 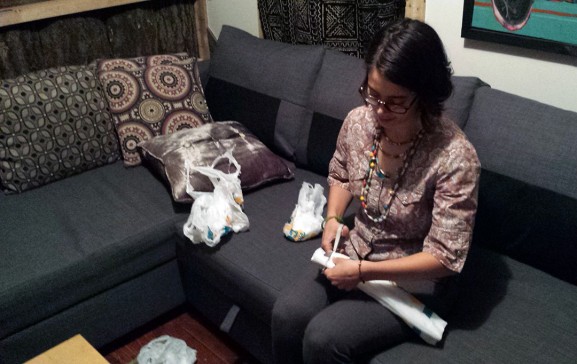 After Barcelona, she continued her travels for another year in Nicaragua and opened a nonprofit art center. In order to raise the funds needed to develop the center, she had to run a juice bar and café in a hostel.

Although she remembers Nicaragua turning out differently than she had originally expected, there was a strong connection of food and art that took place.

“I started to reach out to the students working in the streets and began to draw with them,” Fernandez said. After setting up a small art classroom in the hostel, she taught English, art and computer classes to the neighborhood children.

“I also began feeding them, which was really important,” she said. “Especially for those children living in extreme poverty.”

To this day, the café is still in business and is managed by some of the same children.

From her travel, Fernandez realized in addition to her teaching, she was successful at organizing, planning and controlling programs. Though she enjoys working with children, most of her work is done in her office. 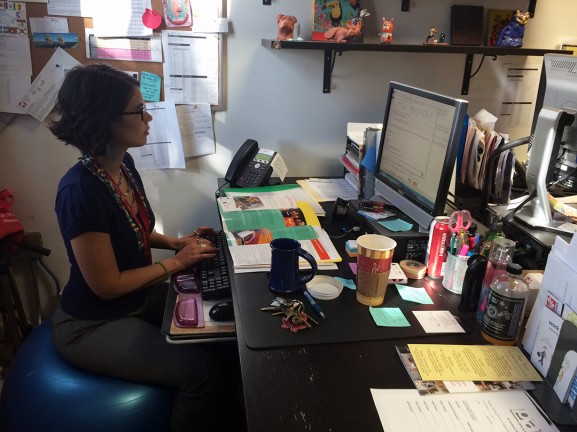 “I’m the wizard behind the curtain,” Fernandez joked. “One of the biggest time consuming elements is getting all of those students into the Saturday program.”

Fernandez recently transitioned the Saturday program application online to handle the 400 student waiting list. She also developed new class schedules, so students had a rotating selection of classes rather than participating in only one course. Fernandez strongly emphasized the programs were tuition free for youth, and students would only pay for a low enrollment fee.

“It is engrained in who I am that I do want to help people through art,” she said. “Right now, I’m stuck on food, but in a year from now, it might be something else. You never know.”

– Text, photos and video by Alex Snell and Amanda Kim.

Dolores Vera took a bus from West Philadelphia to work on her papier mâché axolotl, part of one of three free Día de los Muertos workshops at the Fleisher Art Memorial, located at 719 Catharine [continue reading…]

https://vimeo.com/22170241] Founded in 1898, the Fleisher Art Memorial, which was previously known as the Graphic Sketch Club, had a relatively simple mission—to provide arts education and instruction to individuals within the community. Although the name [continue reading…]

Riverfront: Along the Waterfront, a New Deal Era Tour Revisited

As part of the stimulus of the New Deal, President Franklin Deleano Roosevelt’s Works Progress Administration (WPA) employed thousands of writers under the Federal Writers’ Project (FWP). One of the primary achievements of the FWP [continue reading…]