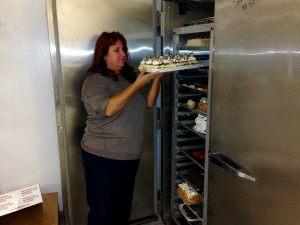 You’ve probably seen her on TLC Network’s “Cake Boss” or maybe tasted one of her luscious pastries. She’s Lisa Oteri, owner of Oteri’s Italian Bakery, which has been in her family for four generations.

Oteri’s great-grandparents originally opened Oteri’s in Hoboken, New Jersey in 1904, after emigrating from Sicily, Italy. Over time, the Oteri brand expanded from one store in Hoboken with a few employees, to five different locations in Roxborough, Southwest Philadelphia, Franklin Mills, Olney and the recently opened Mayfair location.

In September, Oteri’s opened a new location in Mayfair at Frankford Avenue and Oakmont Street. Lisa Oteri said business has been booming, even on Mondays, when she explained most bakeries would be closed due to a typically slow business day.

“We chose to open a location on Frankford Avenue, because we have a big following in the Northeast,” said Oteri. “Now everyone from around here doesn’t have to go to our [North] Fifth Street location to get our pastries.”

Oteri’s Italian Bakery specializes in exclusive cakes, pastries, cookies, cannolis and other sweets. Oteri said about 300-400 specially made cakes are sold on Saturdays alone. The main bakery and distributor for the other shops is at the North Fifth Street location, which also serves as a deli that caters sandwiches. 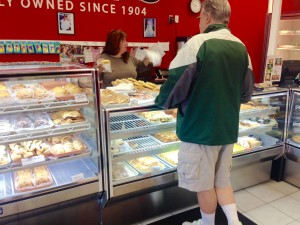 The bakery is truly a family affair. Oteri’s younger sister, Carol Oteri-Semat, is the director of wholesale operations. She also started working at the bakery as an adolescent and enjoys working side-by-side with her sister. Lisa Oteri’s brother-in-law, Walt, is the director of cake production. He’s been involved with the business since the early 2000s and has worked his way up the ranks in the bakery.

Jimmy Flood is the director of operations. Although not technically related, he started working with Lisa Oteri’s father in the 1970s as a dish-washer and has been a key member of the Oteri’s family ever since. Irene is a decorator who started out working in the South Philadelphia store more than 40 years ago. The family recognizes her as one of the best baker’s Oteri’s has to offer.

It appears that Oteri’s is committed to keeping the business in the family. Lisa Oteri makes sure to preserve that tradition by assembling a staff that consists mostly of family. Like every other location, Lisa Oteri only entrusted the new Mayfair location to close family and friends. Margie Bock has been working for Oteri’s on-and-off for the past 35 years.

“I love working for Oteri’s,” said Bock. “Everybody is so close here, and Lisa’s about to marry my brother.” Bock chuckled as she spoke about her. 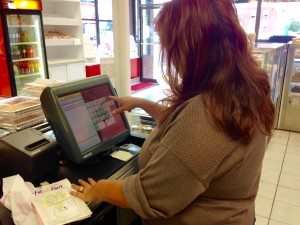 Kathy Kelly is one of the newest employees to join the team at the Mayfair location. She is also a lifelong Mayfair resident. Kelly said she is happy to have a location in Mayfair and raved about working for Lisa Oteri.

“I love every minute of working here,” said Kelly. “Lisa is an awesome person to work for. She’s so great and only deserves the best”

Joseph Schlacter is a Mayfair resident who frequently visits Oteri’s. He was happy to see the bakery open and has developed a friendship with Lisa Oteri.

“We would walk by as soon as the business opened,” said Schlacter. “And I would come in and she would always try to give my son cookies.”

Now Schlacter and his son visit the bakery almost daily.

“This is our routine,” said Schlacter. “He stops in and gets his cookie.”

Lisa Oteri took over the reins of the Oteri’s empire in 2006 after her late father, Thomas, passed away. The businesswoman and mother of two said she never pictured herself owning the business, although it’s been in her family for over a century. 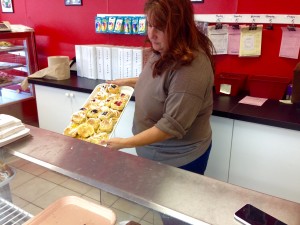 “I actually never thought I would end up running the place,” said Lisa Oteri. “I used to come in just to help my father, but once he passed away I ended up taking over and I absolutely love it.”

She is happy with her decision to run the family business and hopes to pass it down to her sons some day.

“My oldest son, Kevin, is starting to work in the store now,” said Lisa Oteri. “I always tell them all the time to go to college and get a business degree so they can run it, because I plan on giving it to them one day.”

“We just did the cake for the Phillie Phanatics’ birthday,” said Lisa Oteri. “We tried to make the world’s biggest cake for Wawa. We’ve done work for Mayor Nutter and past mayors. Allen Iverson and Joe Frazier used to get their cakes from us, and Pink’s family members are frequent visitors as well.”

Lisa Oteri said she strives for Oteri’s to be better than the big supermarkets. She and the team work to make sure the quality of her products is second to none.

As a mother of two teenage boys and a busy business woman, Lisa Oteri said people often wonder how she does it all.

“Whatever I have to do, I do it,” said Lisa Oteri. “Going to all the stores and making sure everything is okay is tiring, but not tiring in a way that I don’t want to do it anymore.”

– Text, images and video by Clifford Augustin and Lynette Townes.

Operators of The Healing Way won their battle in state court and plan to open in a few weeks at 7900 Frankford Ave. The owners invited elected officials, selected business neighbors and the Philadelphia Police […]

The annual Philadelphia Live Arts Festival and Philly Fringe brings thousands of performing artists from around the world to the city to showcase their acts and talents. For some, it is an once-in-a-lifetime experience and […]

For months, residents and leaders of Mayfair and other communities in Northeast Philadelphia have been fighting for a split of the 15th Police District. Mayfair residents, like John Farrell (right), expressed their concern about the […]