What was it that led you to take an active role in the youth sports community?

I coached my three daughters and my son in many youth leagues as they grew up, and saw how much they benefited from playing various sports: the confidence, fun, health benefits and shared sense of purpose they gained from working as part of a team. I also have long been interested and involved in initiatives that help close the opportunity gaps that exist in Philadelphia between children from high and low income communities. When I read an article about this newly formed nonprofit, I jumped at the chance to be involved. Using youth sports as the vehicle for empowering kids to lead the best lives possible is the most fulfilling, challenging and fun endeavor I could imagine.

What are the goals of The Katie at the Bat organization?

So many life skills can be learned through sports: Resilience, grit, perseverance and teamwork are some of the traits that correlate most closely with future success, and that can be learned and practiced in sports settings. But youth in low-income, urban neighborhoods participate in organized sports at significantly lower rates than their suburban counterparts, and urban girls at even lower rates. We want to empower youth who live in underserved neighborhoods of Philadelphia to gain the skills necessary to lead healthy, successful and productive lives.

Who participates in The Katie at the Bat organization?

We primarily work with girls in middle-school years, when positive interventions can have the greatest impact. Our programs are comprehensive, combining athletics with academic support, character development, nutrition education and leadership training. We provide school-year and summer programs, along with long-term mentoring and coaching to have the greatest long-term impact on the trajectory of the kids’ lives. 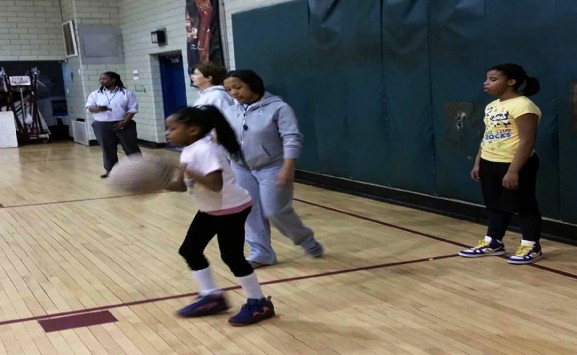 Why do you think sports are such a great vehicle for reaching out to the youth and community?

The neighborhoods in which we run programs have high rates of teen pregnancy and low high school graduation rates. Obesity and obesity-related illnesses leave this generation of kids at risk to be the first to live less healthy lives than their parents. Underfunded, low-performing schools, unsafe neighborhoods, poverty and related stress are overwhelming factors for the families in our programs. Sports-based youth programs can be a place where kids can be safe, learn positive social and emotional skills and form a support network of peers also interested in choosing a positive path. Girls who participate in organized sports are more likely to go to and graduate from college, have a more positive body image, are less likely to have an unintended pregnancy, are less likely to be the victim of sexual or domestic abuse, and suffer less depression and report greater esteem. They also learn, by playing team sports, the collaborative and competitive skills that will help them in increasingly group-based education and job environments. 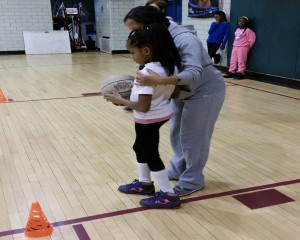 Have you seen improvement in the participants as well as underprivileged neighborhoods since Katie at the Bat began in 2006?

Girls from our early programs are flourishing at academically challenging high schools and are on healthy, positive life tracks – and are on track to attend college! We are so proud of the determination they have shown to overcome so many obstacles. Current participants are working hard in weekly tutoring programs with their devoted volunteer tutors, are improving their eating and fitness habits, and working on commitment, respect and cooperation in sports programs. All Katie at the Bat participants do community service projects, understanding both that they have something of value to give and the importance of helping the greater community.

Text and images by Alexandra Gentile and Jack Goodwillie

The Ben Franklin High School’s boy’s soccer team took the field at 29th and Chalmers and put on an impressive display, defeating Bodine High School 11-5. By the way the Franklin Electrons moved, one would [continue reading…]

On a chilly Saturday morning last December, parents and children gathered in the visitor center at the Schuylkill Center for Environmental Education, located at 8480 Hagys Mill Rd. While they waited, the children explored the [continue reading…]