What is your opinion of the Bridesburg community?

It’s a very tight-knit community that looks out for one another. The people here always have the best interests at heart to keep the community thriving. Our program is the biggest organization in the community, and while we have the board of directors and the coaches, if it wasn’t for the parents really caring, the organization wouldn’t be what it is today. Watching a lot of games through the different organizations, we probably have the most parents who come out and stay to watch. The parents are constantly there for the kids in our community.

Bridesburg seems to be their own little section, tucked away from the rest of Northeast Philadelphia. Does the community have a chip on their shoulder?

I think people tend to forget about Bridesburg because it’s on the other side of Aramingo Avenue. But I don’t think the community really thinks about that too much, it’s a different time and age. It’s really just about building the community around here.

For example we were founded in 1972 and the first program was baseball and it really just built bigger from there. Baseball remains our strongest program along with softball, and then soccer being a close second and we also have an in-house program that has really taken off.

Three years ago, Trish Fries stepped down as treasurer to become director of a new cheerleading program here. The first year there were about 10-15 girls, it doubled the second year, now we’re on to the third year and our squad was invited to Florida for the Disney Nationals, which everyone in the community is pumped up and excited about.

Everyone gets involved in the community, and they pitch in. There are good values down here in Bridesburg.

How do you find the balance between your role in the community, and all of the other responsibilities in your life?

At times it’s not easy but my family is very active in the organization. My wife coaches the same teams I do. We coach two softball teams. She’s coaching basketball right now and I coach two soccer teams. My kids are getting involved with volunteering, we push for them to volunteer. It’s an important trait to have, we always felt like it would make them a productive member of society. 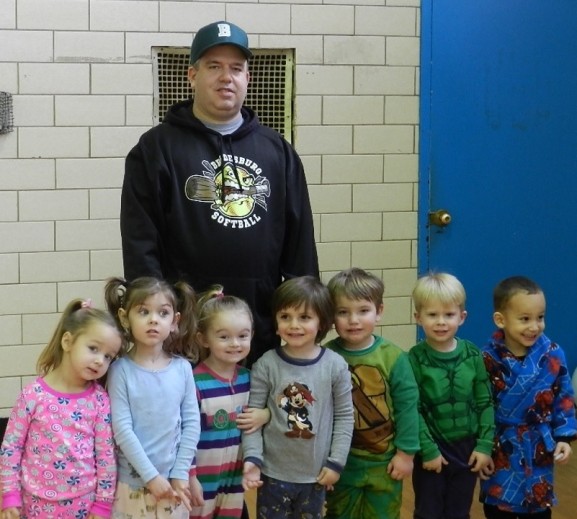 What role does your organization play in the community?

For the younger kids, it gives them a place to meet friends and to learn things every day. As far as the older ones, we always want to keep them off the streets. The more kids I see here, the better qualities I see in them. A lot of them are finding themselves, and they’re bettering themselves. When I see that, it’s so rewarding, and that’s really what I see here a lot. We look for more ways to bring kids in and make the community better as a whole. There may always be that group of kids hanging on the corner, but you hope that even if you get one of them in and change their life, then you definitely feel successful.

Where does your funding come from, and do you have enough to manage?

Funding is a huge challenge every year, we certainly don’t have enough funding. There’s a lot of local funding, the businesses in Bridesburg help as much as they can. The city and the state used to help us out tremendously but not anymore. It’s a shame because it seems like the kids come last. I don’t think they intentionally neglect us, but there are things they believe to be more pressing right now. To us, it’s all about the kids.

https://vimeo.com/62635748] The Friends of Pennypack Park work together to beautify the park and preserve it for the enjoyment of future generations. Despite having an eye on the future, there is a particular area of the park which [continue reading…]

https://vimeo.com/92800313] As the Klein Jewish Community Center works to feed needy and hungry seniors, it has bolstered its efforts to become more self-sufficient. Efforts by people like Hunger Relief Volunteer Coordinator John Eskate, who has overseen gardening and [continue reading…]

Visitors to the John Heinz National Wildlife Refuge at Tinicum Marsh are greeted by significantly more green than one can expect to see almost anywhere else within city limits. Eschewing concrete and skyscrapers, the refuge [continue reading…]