Kate Kosarek is the Executive Director of the Friends of Rittenhouse Square, a volunteer organization that maintains the fountains, statues and foliage of Rittenhouse Square. They also host a number of events within the square throughout the year, including the annual Ball on The Square fundraiser.

Who are you, and what is your role within the Friends of Rittenhouse Square?

My name is Kate Kosarek, and I’m a New York native. I’ve been living in Philadelphia since attending and graduating from Drexel University in 2005. I am currently the Executive Director for the Friends of Rittenhouse Square. 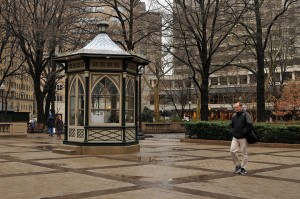 How did you first get involved with the Friends of Rittenhouse?

In 2010, my former employer was chairing the Ball on The Square, the Friends largest annual fundraising event. I was helping with the event logistics and really developed a strong tie to the organization. I had always loved Rittenhouse Square, but never realized a Friends group actually supplies a substantial amount of the funding to keep it beautiful.

How are official positions, such as the board of directors, decided within the organization?

The board of directors is comprised of 45 voting members. Each director is elected for a three year term and is eligible to serve for two consecutive terms. Every November a block of seats become available. Nominees are chosen from a pool of applicants by the nominating committee, which is a select group of six board members. They’re then presented at the October board meeting for discussion and voting. The final nominations decided on by the board at that meeting are then confirmed by the membership at the November membership meeting.

What is the primary role of the Friends of Rittenhouse within the local community?

The Friends [of Rittenhouse Square] work in private-partnership with Philadelphia Parks and Recreation. Rittenhouse Square is public, city-owned property. The Friends were created to fill the financial gap between the needs of the park and available city funds. With city funding continuing to decline, the Friends’ role has become increasingly important. On an annual basis, the Friends provide all landscaping, tree work, bench cleaning and repair, dog bags, sidewalk sweeping, flowers, seasonal groundskeeper, seasonal park ranger, graffiti removal, and the like. They also take on special improvement projects in addition to the annual care, like the $1 million restoration campaign in 2013 and 2014. Funding comes from membership, events, private donations, grants and special campaigns. 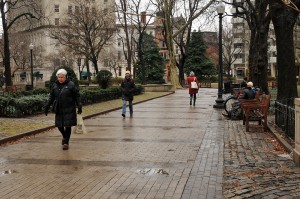 Not to my knowledge. Prior to the Friends, the Fairmount Park Conservancy, which is now Philadelphia Parks and Recreation, was caring for the park.

The Friends work with Philadelphia Parks and Recreation on several projects, but they are not involved in the operations of the Friends of Rittenhouse Square organization itself. The City provides all the electricity and water to the park and there is a trust setup for Rittenhouse Square, where funding comes from for specific projects. To my knowledge, Friends of Fairmount Park isn’t involved. I haven’t dealt with them in the five years I have been involved.

As a volunteer organization, our primary focus is the fundamental day-to-day needs of the park. We have special campaigns to address specific projects. In 2012, we launched a security and lighting campaign to upgrade the park lighting, install new lighting, add a security camera system and hire a dedicated seasonal park ranger. 2013 marked the 100th anniversary of the design of the park and we began a $1 million restoration campaign to restore and preserve all of the park stonework and fountain. 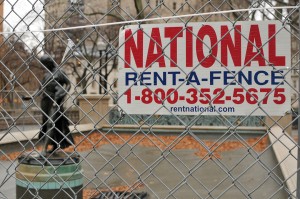 Other than the Fairmount Park Commission, does Friends of Rittenhouse keep in contact with any other similar organizations from other neighborhoods, and are there ever opportunities to work with them?

The Fairmount Park Conservancy has a Park Stewardship group. This forum allows the different park Friends’ groups to get together and discuss issues and look for advice. Rittenhouse Square is a bit unique as it is designated as a non-recreational park. Many of the issues other parks have are playground, ball field and recreation-space related. These are things we don’t encounter.

There are a number of events held regularly at the square, such as farmer’s markets and art sales. Are there any other special events that may be hosted here, either later this year or further in the future?

All events in the park require a permit from Philadelphia Parks and Recreation. They have a separate application fee and approval process that we are not involved with. There is a strict no soliciting and no vending rule in the park. We host several annual events. These include the Little Friends Festival, which is the third Wednesday in June, Ball on The Square, the third Thursday in June, and three Saturday Outdoor Cafes’ and 18th Street Closings, which is in conjunction with the two Fine Art Shows and the October Craft Fair. There’s also the Holiday Lighting in December.

In addition to our events, there are two annual Fine Art shows in June and September, two annual Craft Fairs in May and October, the Rittenhouse Row Spring Festival in May, the Flower Market in May, and the Philly Weekly Concert series, which is typically August. These are all run by other organizations.

In your opinion, what qualities does Rittenhouse possess that make it stand out among other areas in Philadelphia? Are there any attractions, restaurants, or other locations nearby that you would recommend a first-time visitor to the square check out?

I think the layout of the park itself and where it falls within the city is special- the symmetry of the walkways, the restaurants on 18th street and the high-rise residential buildings casting shadows down on the established chestnut trees. The Rittenhouse Row shopping district is right off of 18th and Walnut, but the park seems to provide a nice break to the noise of the city streets. There are so many beautiful and distinct architectural aspects that makes it stand alone, like the interior court and fountain. Because it is a non-recreational park, there is an old-world feeling of peace and tranquility. Personally, I think the park is the most beautiful in December when the holiday lights are in the trees. Walking through on a brisk evening and those lights are sparkling above- it just feels magical. 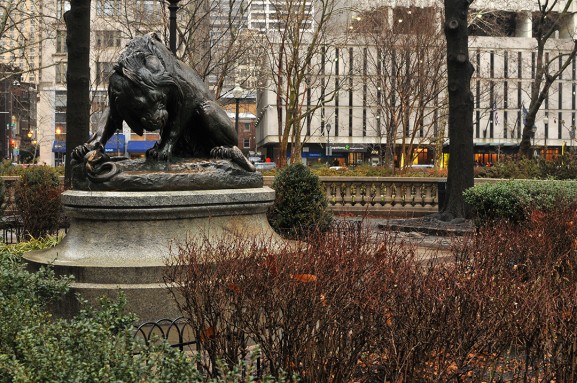 This Thursday marks the public opening of the Spring 2011 Exhibition at the Philadelphia Art Alliance, Kickin’ Back: Design for Leisure. Designers and architects were selected based upon their artistic interpretation of the concept of [continue reading…]

As dog-walkers or window shoppers get their evening fresh air, it’s hard to resist stopping to admire the gorgeous paintings that hang from the walls inside Twenty-Two Gallery. Owner Shawn Murray said he keeps the door [continue reading…]