Tyler Teran didn’t plan on being an artist.

During his freshman year at Temple University, Teran hadn’t declared a major and considered studying history. But while taking a class for non-art majors, Teran realized he was happiest when creating.

“It was an 8 a.m. class,” Teran said. “I don’t think I ever passed a class before 10 a.m. before. But I passed that class. Eventually I thought that was something I should learn and pursue in school and try to do full time.”

The West Philadelphia artist is a muralist, painter and photographer. In 2010, Teran and fellow artists Eric Mozes and Donnell Powell started Color My Sidewalk, an artist collective that claims in their mission statement to focus on aesthetic expression, cultural context and social change. They work to bring together local artists in order to host events, curate exhibitions and create public art.

“We realized sometimes to move things forward, you have to bring in a bunch of people and organize something beyond yourself,” Teran said. “I think we all agreed that there’s something special about working in that type of community-based arts.” 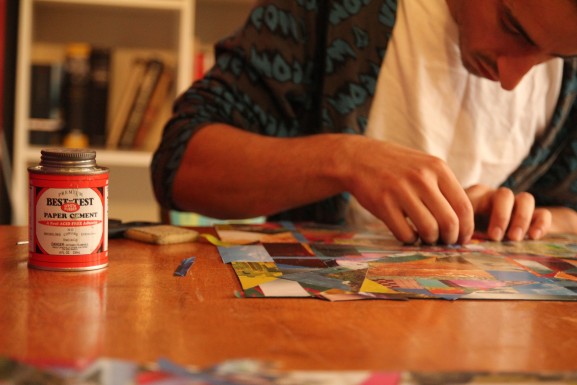 In 2011, Teran, Mozes and Powell spent 12 days creating a 30-yard mural on Cecil B. Moore and 15th Street. The colorful pop art skyline had a dual purpose of representing Philly living and paying tribute to the memory of Roswell Friend, a Temple track-and-field athlete who passed away that August.

Temple senior Elizabeth Diehl said she intentionally passes by the mural each morning on her way to class.

“I love seeing something like this every day,” Diehl said. “It makes me feel connected to the city and the campus. I think it shows a sense of community that most other places don’t have.”

That sense of community that Color My Sidewalk prides itself on has helped the organization grow with 20 featured artists and collaborators. They recently opened C.M.S. Studios in South Philadelphia, giving them more space to complete their large scale projects.

Teran credits Color My Sidewalk with motivating him to pursue a passion for mural arts.

“I really love doing something that’s kind of beyond you know a single person’s capability,” Teran said. “You have to use a space that’s not completely yours.” 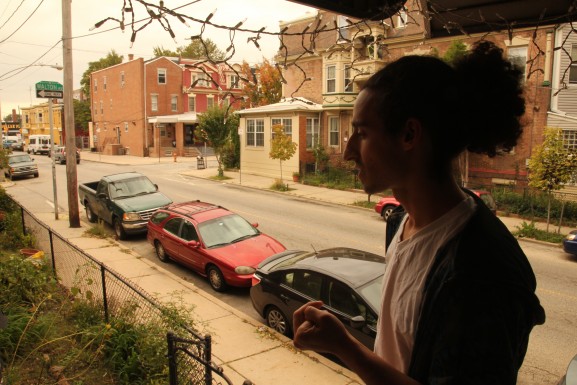 The idea of using the city as a canvas is prevalent in Teran’s work. Drawing inspiration from graffiti in his neighborhood, Teran said his work has helped him become more aware of the art around him.

“I’m pretty amazed at how I can walk through a place like Center City that I’ve been to a million times and find something new,” Teran said. “It’s constantly been around me my whole life, influencing me in terms of public art.”

“Teran works with spray paint, a medium that carries a lot of weight in the history of mural art,” Moore said. “It automatically lends to the thought of graffiti and art as an invasion of public space. Mural art does this sort of thing where it now makes the work available to the public.”

“It involves community and participation from multiple parties,” Hobaugh said. “It’s not exclusive and it encompasses a majority of different art concepts.”

Last year, Teran painted two murals for the coffee café chain La Colombe, one at the Fishtown location and one for Rittenhouse Square. But after having his work featured in a recent exhibit in New York City, Teran said he’s been focusing more on his photo collages. His “Forreal” collection portfolio was favorably reviewed by Complex magazine. 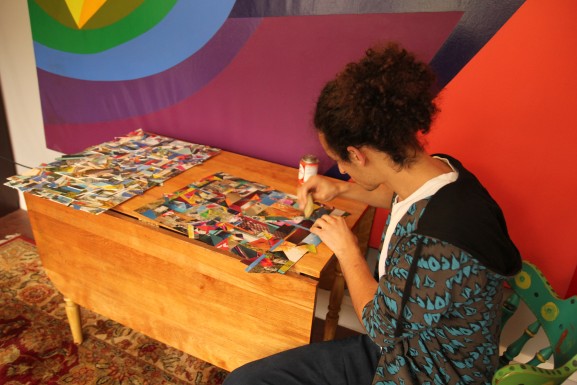 “These are like puzzles to me,” Teran said. “Some of these works have just become practice in patience, dedication and execution, rather than this genius plan I have from the start. I learn more and more every time I do one.”

Tyler Reppert, a graphic designer from Center City, said Teran’s collages are the perfect marriage of reality and fantasy.

“It reminds me of the whole cubism movement just in the composition,” Reppert said. “It guides your eyes through each of the pieces. It forces you to move through these structures like you’re walking through a surreal city. There’s a lot going on here.”

Teran has concentrated more of his creative efforts to helping with charities like Take a Seat, where designers and design companies organize artists to upcycle chairs and auction them off. The proceeds go towards Project Home, a Philadelphia homeless organization. Teran designed a chair that will be in the Macy’s window display through October.

Teran has also donated proceeds from his work to a program run by close friends that aims to refund art programs in schools impacted by budget cuts. 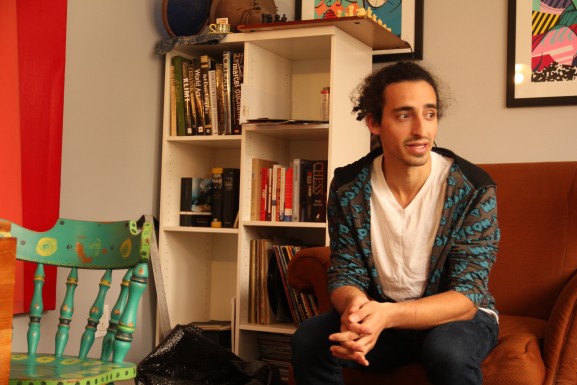 “I appreciate working for causes and reasons besides myself,” Teran said. “It brings purpose to what I do.”

Teran said he doesn’t know what his next project will be. He takes his work one day at a time. He gets ideas from books he reads or other classical and contemporary art. He said he looks up to the painter Murray Dessner. Inspiration can come from anywhere.
“Sometimes that can be the most difficult thing, like making myself do work and knowing I might just put it in a folder in my living room behind my couch,”  Teran said. “I’m lucky I’ve had other people and things around me to help inspire me and challenge me.” 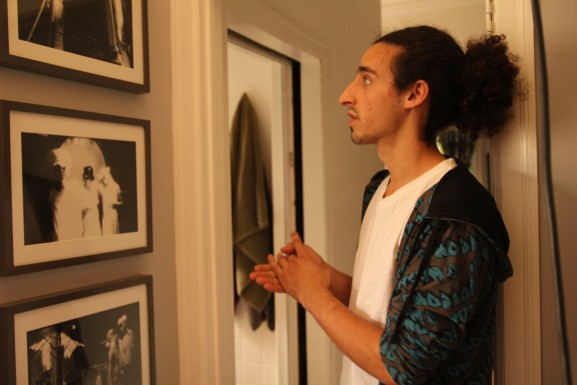 Text, video and images by Jessica Smith and Alexa Bricker.

Kensington: Art Gallery Celebrates Lives of Firefighters Past and Present

Hidden in a newly renovated warehouse at 2024 East Arizona St. is what artist Jesse J. Gardner likes to call the “best kept secret of Kensington.” On Sept. 11, 2011, in honor of the 10th anniversary of 9/11 [continue reading…]

Among the bright blue walls and posters full of literary puns, Kathleen Volk Miller (below) sits in a sea of papers and books. It’s a scene some might find overwhelming, but she wouldn’t have it any [continue reading…]