Irvin B. Shannon, executive director of the Harmonious Volunteer Center (HVC), walked into Wash-n-Dry Laundromat at 26th Street and Cecil B. Moore Avenue on Wednesday, Dec. 2. He greeted the laundry attendant, opened the lid of a large trash bin, and reached his arm all the way to the bottom. This particular trash bin wasn’t full of food wrappers, lint, and plastic soda bottles; it contained about 30 pairs of donated shoes.

“It becomes a regular route once every week, go to these particular places, pick up the shoes, return the shoes back to our warehouse for processing and just continue that,” Shannon said during an interview prior to the collection.

HVC, an organization that provides community services to bring about social change within the Philadelphia community, has been collecting shoes for low-income residents in Philadelphia, the United States, and people in developing countries for the past three years. The main objectives are to create jobs, improve the environment, and help people in need.

Shannon’s shoe drive campaign is part of a partnership with Funds2Orgs, a social enterprise that partners with groups like HVC to help them plan and implement a shoe drive fundraising campaign. HVC is paid by Funds2Orgs for the shoes they collect. The purpose of the fundraiser is for the organization to engage with their supporters in a creative and innovative way without having to ask them directly for money.

“It’s not reaching into a person’s pocket and asking for, you know, give me a 10 dollar donation, give me a five dollar donation,” Shannon said. “This is something you’re going to dispose of, so it’s not an economical drain on anybody that’s donating the shoes.”

Residents can donate shoes at designated shoe drop off locations. In Strawberry Mansion, there are currently two. One is at Wash-n-Dry Laundromat and the other is at the Strawberry Mansion Neighborhood Action Center (NAC), located at 2829 W. Diamond St.

“I like the partnership because we know people will be getting help from the shoes,” said Tyrone Williams, community liaison at the NAC. “It also helps those that need to clean out their closets.”

When people do clean out their closets, typically their shoes go to landfills.

All of the extra shoes in landfills damage the environment. Shoe materials can take 40, 100, up to 1,000 years to decompose. During decomposition, they release methane into the air.

According to the EPA, methane is the second most prevalent greenhouse gas emitted in the United States from human activities. Methane emissions have decreased by almost 15 percent from 1990 to 2013, but methane traps radiation more efficiently in the atmosphere than other greenhouse gases such as carbon dioxide. The EPA reported that the comparative impact of methane on climate change is more than 25 times greater than carbon dioxide over a 100-year period.

“[The shoe drive campaign] becomes a reasonably sensible approach that [shoes are] an ongoing commodity that are going into the landfill, is creating destruction and havoc in our environment, so we have an impact by interrupting the flow of these shoes going into our environmental areas,” Shannon said.

After the shoes are given to low-income residents in Philadelphia and the United States, the remainder goes to people in developing countries. The shoes give them the ability to create micro-businesses where they clean, repair and repurpose the shoes and sell them for profit. This is a way for families to get out of extreme poverty.

“Personally, I’m glad that we’re here to be of help,” Williams said.

In addition to providing shoes for those in need, Shannon wants to provide people with jobs.

Currently, there are about 33 people helping to operate the shoe drive campaign. Their roles range from transporting, processing and storing the shoes, helping with public relations, and coordination. Each person receives some kind of economic benefit, whether it be free lunch, carfare, or a small amount of money. Shannon’s goal is to provide full-time jobs to individuals who may want them by expanding the campaign.

As they acquire more shoe drop off locations, they will need people to collect the shoes every day of the week. They’ll also need more people for unloading the shoes, laying them out, putting rubber bands around the pairs, and bagging the shoes. 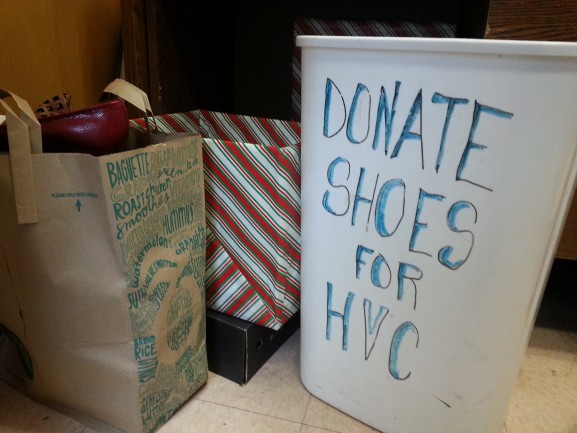 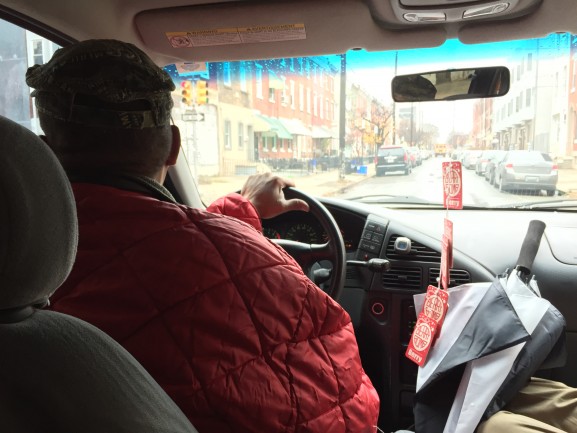 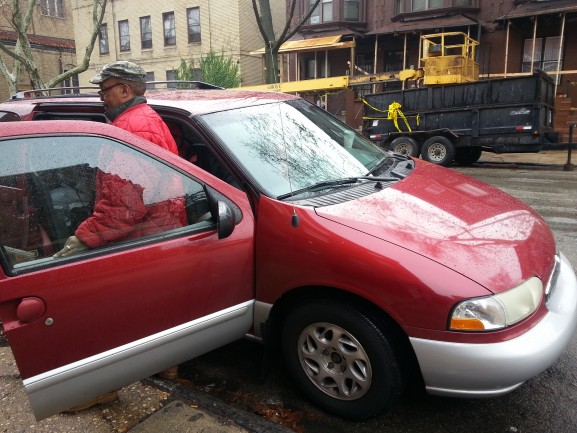 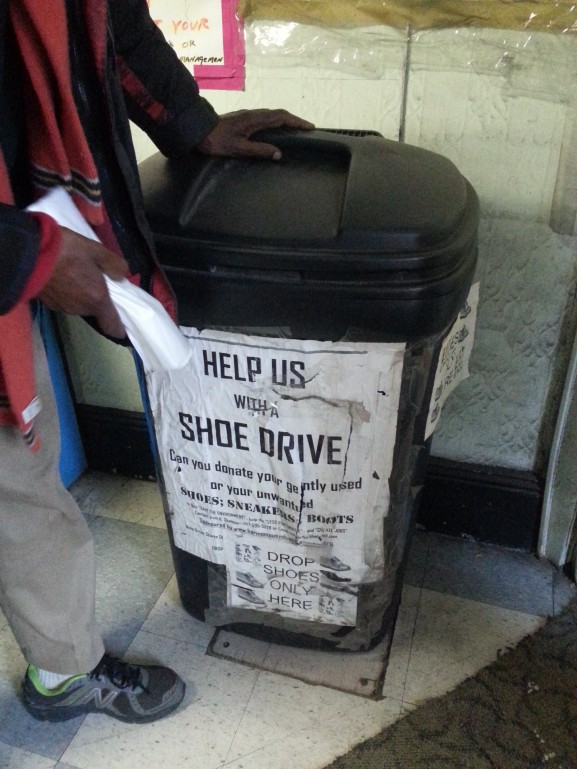 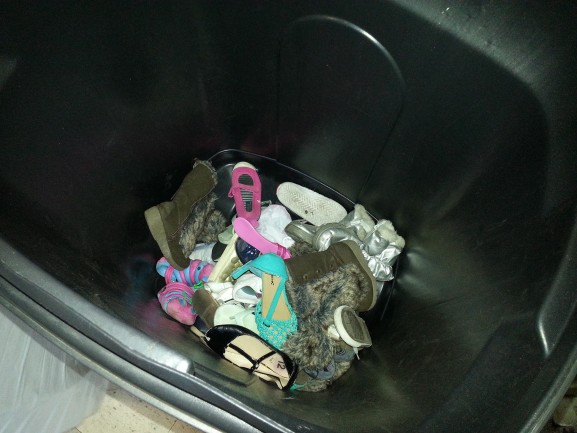 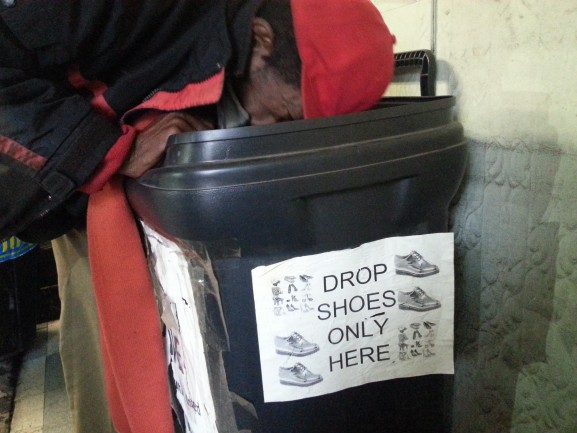 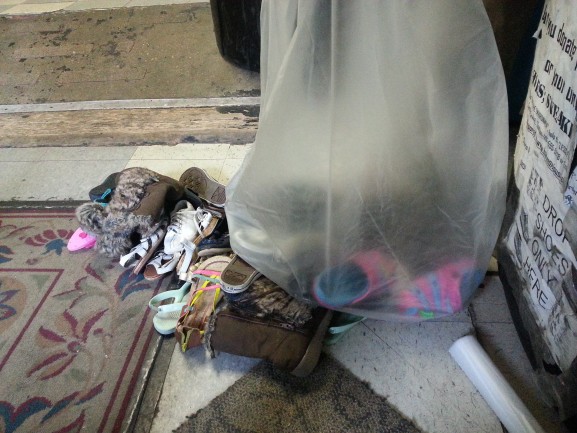 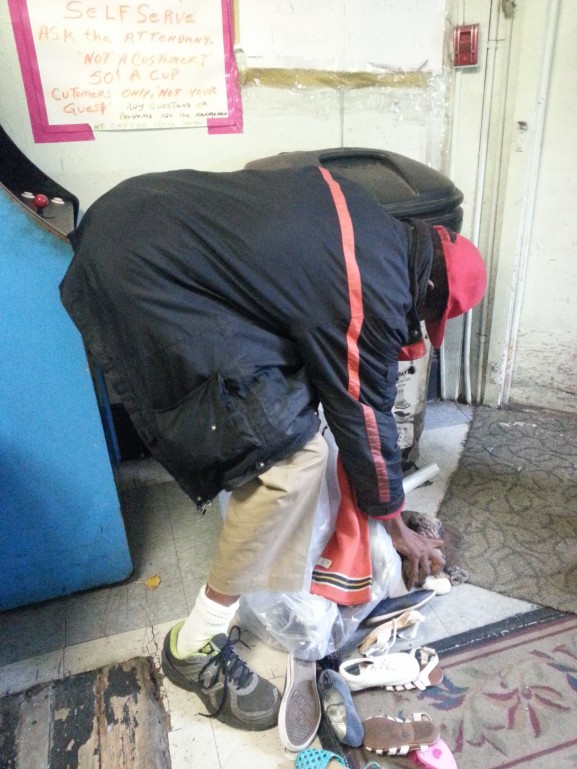 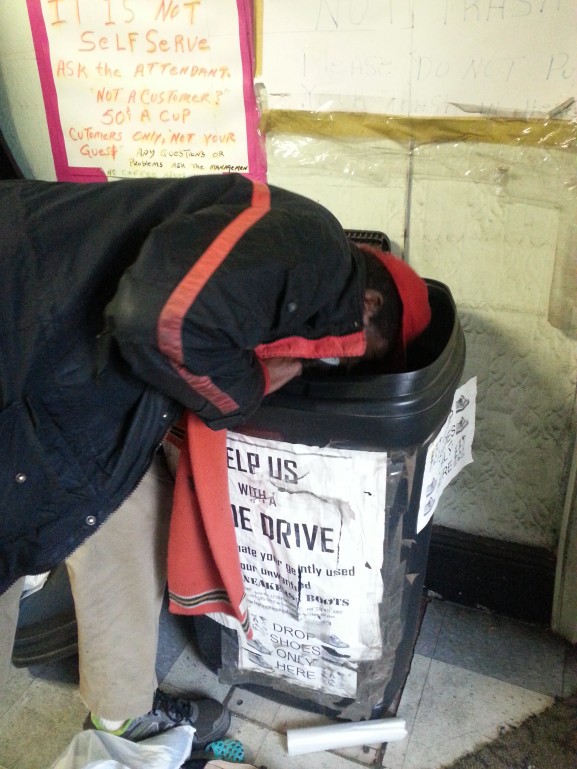 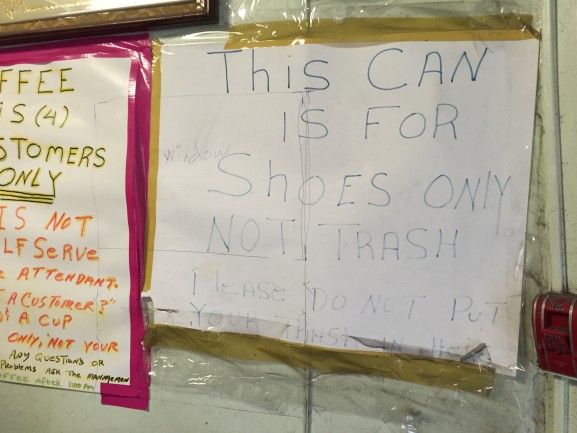 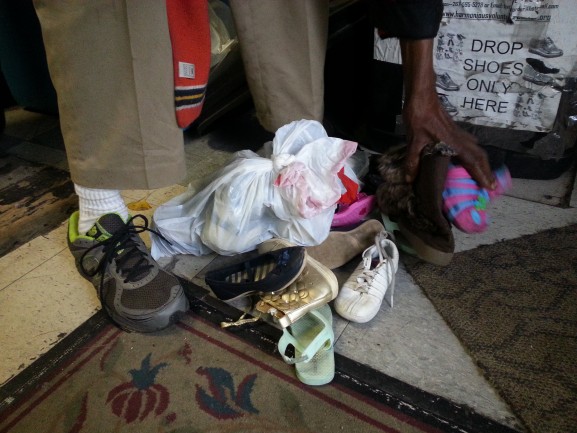 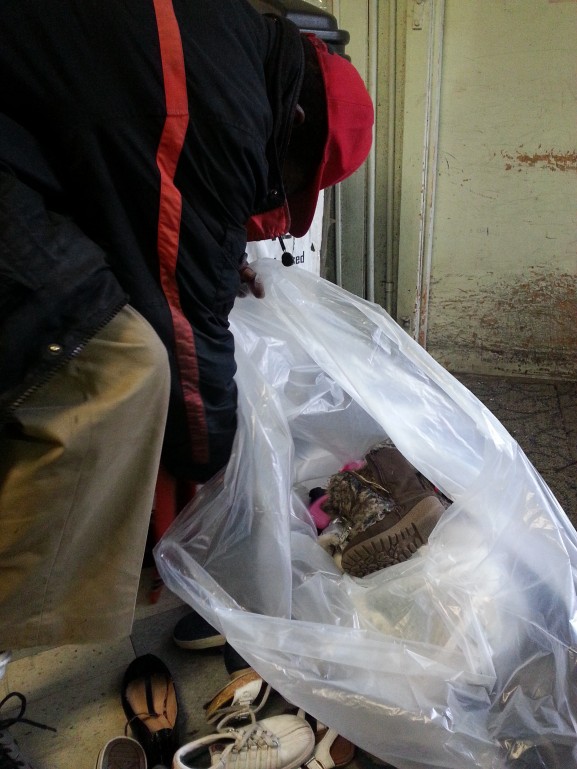 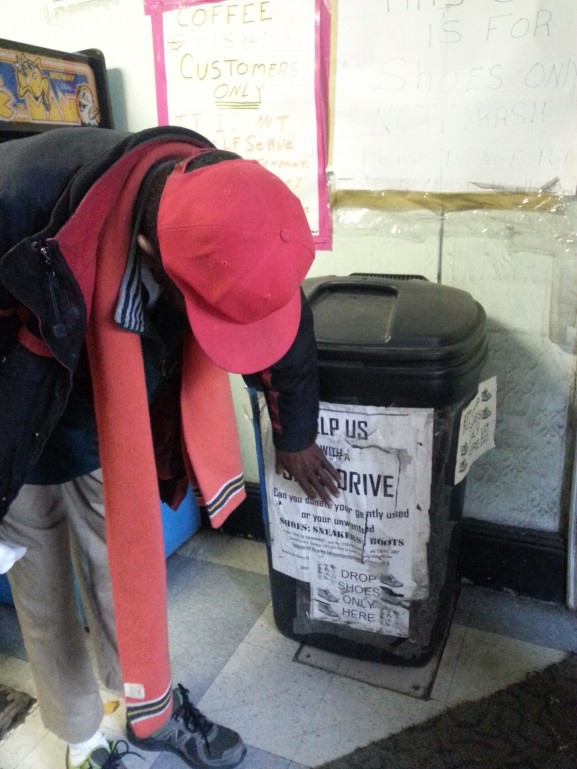 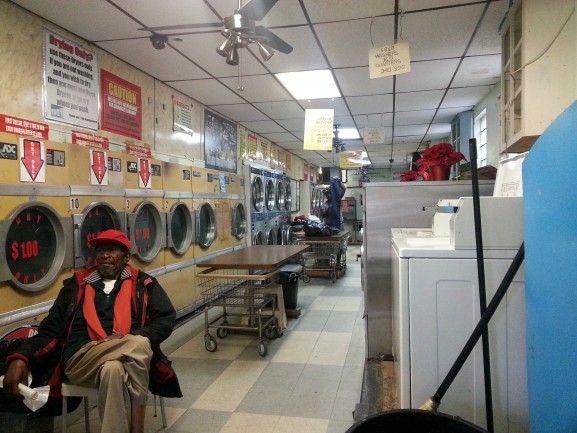 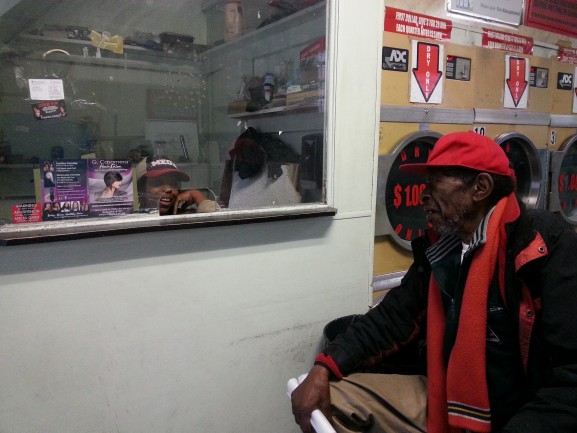 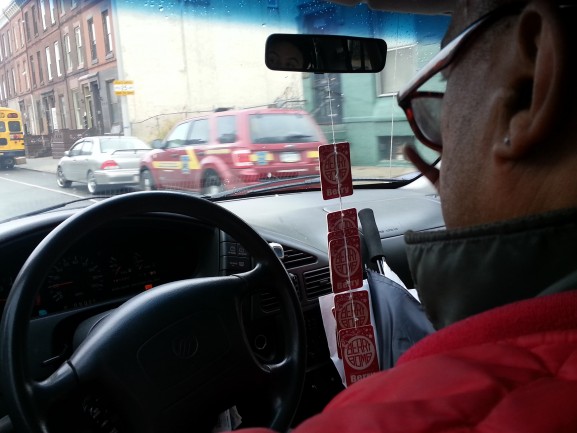 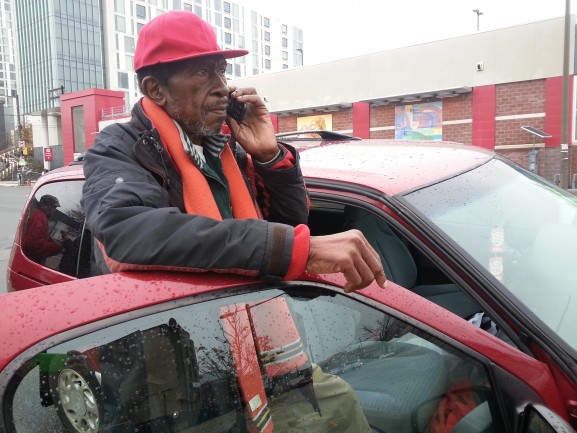 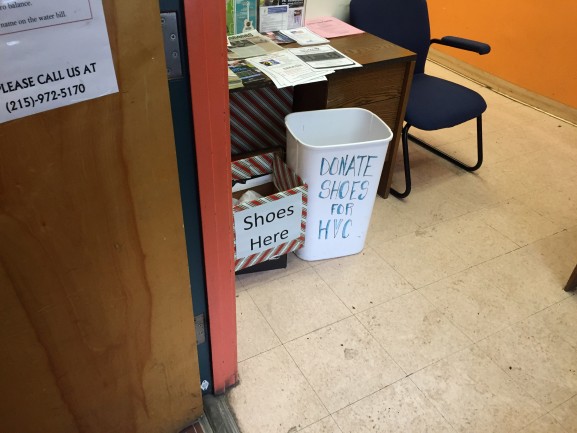 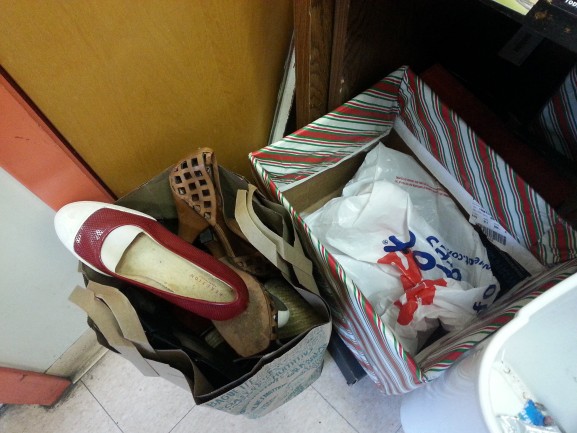 Until then, Shannon provides the volunteers with whatever small stipend he can.

As of January, HVC has raised 25 thousand dollars in contributions to the shoe drive. That’s a total of about 60 thousand pairs of shoes. The funds have been used for the volunteer’s stipends, costs for transporting the shoes, donations to faith-based and community based organizations, and costs for administrative supports and services.

“I found that it just makes good sense to use this as an economic benefit because the volume [of money] that comes in and goes out,” Shannon said.

Frank Farmer, transportation coordinator, drove Shannon from the Laundromat to the NAC to collect the shoes for the day. He went inside the shoe drop off locations with Shannon to help carry the shoes out to his red van. After the shoes were loaded, Farmer drove down the street toward their next location.

“What Mr. Shannon has established and what he’s planning to do will live on forever,” Farmer said.

– Text, images and audio by Noe Garcia and Avory Brookins.

The Awbury Arboretum and The Francis Cope House hosted an event Saturday to focus on the history of African-American environmentalism. Speaker Gina Thomas, a Mt. Airy resident who developed a passion for environmentalism as a […]

On a national level, the Latinx baby boom is expected to increase the population by 167% in the next thirty years. With an ever growing population of about 1.6 million residents, the Latinx community in […]

https://vimeo.com/24445428] Brooke and Jim Higgins have traveled the world working as personal chefs and caterers for high-end clientele. Northeast native Brooke even had the experience of working under celebrity chef Todd English at his Boston […]