On the corner of 20th and Federal streets is a coffee shop. The exterior of its tall building is concrete-gray and modern, with circular detailing bearing the emblem of its owner, Ori Feibush. The interior holds a large community chalkboard, an array of espresso-based drinks and free Wi-Fi. It could be mistaken for any other city café; however, OCF Coffee House lies right in the middle of Point Breeze. For that, it is just another bright green target in a complex, urban re-development war zone.

Gentrification in Point Breeze is nothing new. There is evidence in a sizable census data shift in racial makeup and income level from 2000 to 2010. It is apparent in the numerous political stories and profiles written on revitalization figures like Feibush and his counterpart, John Longacre. It exists in the price difference between purchasing a handcrafted latte and a brown-bagged malt beverage being greater than physical block distance. However, there is something that the quantified data has had difficulty capturing: the real attitudes and wants of residents in light of the changes. 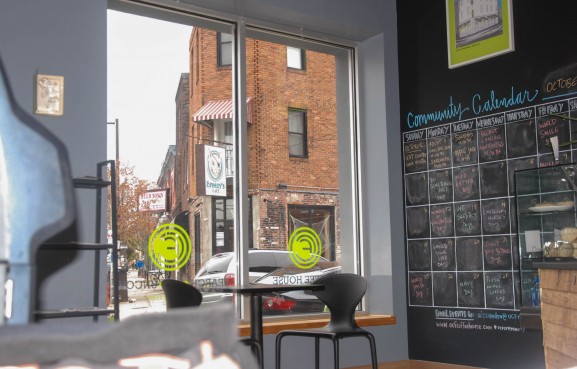 The coffee shop symbolizes the current governing question: should Point Breeze appeal to the old or the new? The answer differs amongst the various players of the Point Breeze gentrification game. An unlikely voice in favor of longtime residents is a young professional who moved to the area in 2006—the same year that Feibush happened to set up roots.

Haley Dervinis could easily be mistaken for one of those attempting to dismember the natural fabric of the neighborhood; instead, she is an active member of the Registered Community Organization, or RCO, Point Breeze Community Development Coalition, and serves as its zoning committeeperson. Approximately twice a month, she sits alongside the majority African-American home and business owners to discuss the shifting landscape of Point Breeze.

“I didn’t show up [to Point Breeze] like, ‘I want this to change, and I can’t wait until it’s all different,’” Dervinis said. “I was happy with what it was and the people who were there. So people, what I call ‘gentrifiers,’ go into a neighborhood and try to change it because they think there’s something wrong with it.” 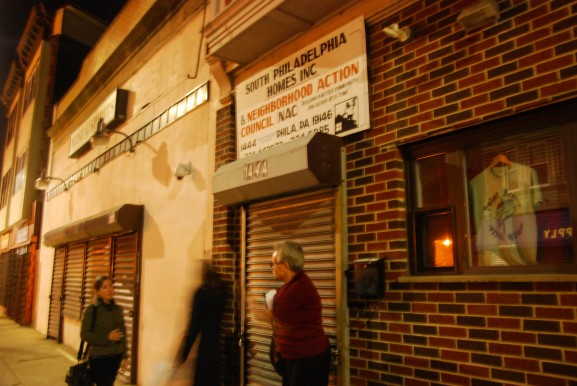 Dervinis identifies with the original close-knit and blue-collar culture of Point Breeze, before the introduction of drugs and gang violence led to its downfall, and subsequent economic dilapidation, in the 1980s. However, for this reason, she openly opposes the newest, problematic social trend coming to the community: the so-called ‘gentrifiers’, and the building methods of OCF Realty that exclusively meet the demands of this influx.

“I think Ori Feibush could do a lot of really great things, and I think that it’s sad that he chooses not to,” she said. “I think he could have successfully rebuilt a neighborhood with community engagement and input.”

There are those in the community, though, who do feel as if Feibush is contributing positively to its structure.

Moira Kulik, a resident of Point Breeze since 2011 and committeeperson for the 36th Ward, 9th Division said of the coffee shop, “It’s nice, it puts a face on the company. [Feibush] also facilitated the opening of the CDC across the street, so now we have this nice triangle of OCF, CDC, and Breezy’s. If we could just get more commercial stuff to continue the trend—that would be fantastic.”

Another voice of the ‘new’ Point Breeze is Jonathan King, a former zoning lawyer who permanently re-located to the area shortly before Kulik in 2008. Brought to the area for the promise of affordability, his focus was not on the commercial re-development of Point Breeze, but on its residential upturn. His personal fight even brought him to testify against former councilwoman Anna Verna’s bill to restrict the construction of three-story homes.

“People don’t want any development, but when you prevent people from building, you’re just increasing the cost to live there,” King said. “They want poor people to keep living in Point Breeze, but that’s not realistic. It’s cheap and two miles from Center City. Grad Hospital is not affordable, so people are going to go to the next neighborhood over.” 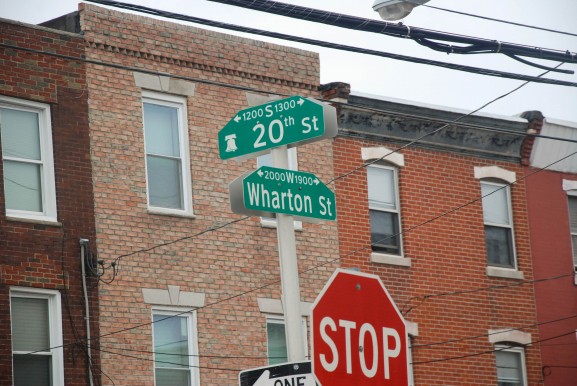 While this particular bill might have died on the floor and signaled a victory for ‘gentrifiers’, the tug-and-pull relationship between residents of Point Breeze is still alive and well. Now, it rests in a vacant, fenced-off lot at 20th and Wharton streets, and just like the coffeehouse just a short walk away, a green, OCF banner marks another bulls eye.

According to Dervinis, Feibush plans to construct 22 single-family homes in the half-million-dollar price range, which would be a stark contrast to the $35,000 median income of the area. 2010 Wharton would begin yet another chapter in the community gentrification narrative, and would signal yet another change of hands. The question of whose hands exactly, the old or the new, rests in a zoning meeting slated for April 20.

– Text and images by Julianne Spingler.

With a total intake of 27,990 animals last year, Philadelphia ranks above the national average of cats and dogs brought in to animal control. Allison Lamond (below), community outreach and volunteer coordinator for the Philadelphia [continue reading…]

Newbold: The Neighbor Behind Crushing Stigmas While Bringing Residents Together

Chinatown: A Community Leader Who Learns from Challenges