“It is not just one day,” said Carlton Williams, deputy commissioner for the Philadelphia Streets Department. “It is a constant battle.”

The “one day” is referring to the 2016 Philly Spring Cleanup, which took place on April 16. The Streets Department started the citywide cleanup nine years ago in an effort to bring the community together and promote keeping neighborhoods clean.

The Streets and Sanitation Department budget includes 1,669 employees, contracts for snow removal throughout the city, as well as trash and recycling pickup for 540,000 households, and the maintenance of 2,525 miles of roads and highways, among other projects.

Williams explained the Streets Department has implemented programs such as the Block Captains as well as events such as the Philly Spring Cleanup in order to better serve the city.

Currently, there are more than 6,500 Block Captains in the city who act as leaders to bring their neighborhood together in order to ensure it is clean. The Streets Department provides bags, brooms and other necessary equipment; however, sometimes the supplies fall short. 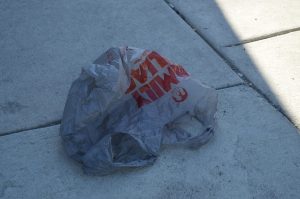 Julie Hancher, the owner of Green Philly Co. and editor-in-chief of the Green Philly blog, describes litter as a huge problem in the city. Green Philly blog started in 2008 when Hancher and her friend Beth Funari Sims decided that Philadelphia could be a better city in terms of sustainability, so they created a blog that now includes everything from events to news on recycling and healthy recipes.

Hancher, a sustainability expert, said litter comes in many shapes and sizes: from the actual litterer to the accidental litter that occurs due to wind or happenstance. The litter that surfaces after trash day and when trash cannot be picked up for one reason or another is also a huge part of Philadelphia’s trash problem.

“The Philly Spring Cleanup does a great job of uniting the neighborhoods and communities to clean up their blocks, parks and rec centers,” Hancher said. “Although this event happens once a year, hopefully it inspires Philadelphians to clean up and take care of their neighborhoods year-round.”

The Streets Department formed the Philadelphia More Beautiful Committee in 1965 to oversee the Block Captains, coordinate with Town Watch and work with the police through each district’s Police District Advisory Council.

“Miss Penny” Randolph, a resident of Point Breeze and Block Captain for the last three years, described the importance of neighborhood cleanups that she helps lead on a monthly basis. She believes they benefit the community economically and socially. 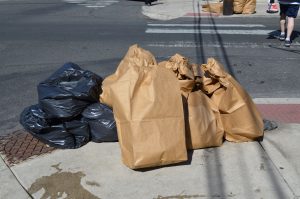 Neighborhoods such as Point Breeze, which is attempting to rebuild its once bustling business district, are also adversely affected by litter. According to the 2009 National Visible Litter Survey and Litter Cost Study, conducted by Keep America Beautiful Inc., 36 percent of business development officials said that litter impacts a decision to locate to a community.

The Department of Justice also echoed Williams’ connection between clean neighborhoods and crime. In a 1999 bulletin titled “Youth in Action”, the agency referred to community cleanups as “some of the most tangible rewards of any anticrime program.” Cleanups are immediately gratifying because the end product is visible and can inspire people to become more active in their neighborhoods.

To better serve the community of Point Breeze, the Point Breeze Community Development Corp. has promised through its Green and Clean Committee to have neighborhood cleanups once a month in order to better the commercial corridor. The  CDC also hopes to add more trees to the neighborhood as well as better utilize available green space.

“It has to get to the point where we change people’s mindset, where they understand it’s not OK to finish a drink and drop it on the floor, or take that bag from the corner store or McDonald’s or wherever and drop it on the ground,” said CDC executive director Steve Sabo. “It has to start with each individual person to have even a small sense of civic pride and not being OK with living in a dirty neighborhood.”

South Philadelphia West: At OFC Philly, Kids Are Encouraged To Screw Up

Finding an educational yet fun activity for children can be a difficult task. Many times, kids aren’t doing more than coloring outside the lines and playing with dolls or trucks. At OFC Philly in South Philadelphia, Nick and Erin [continue reading…]